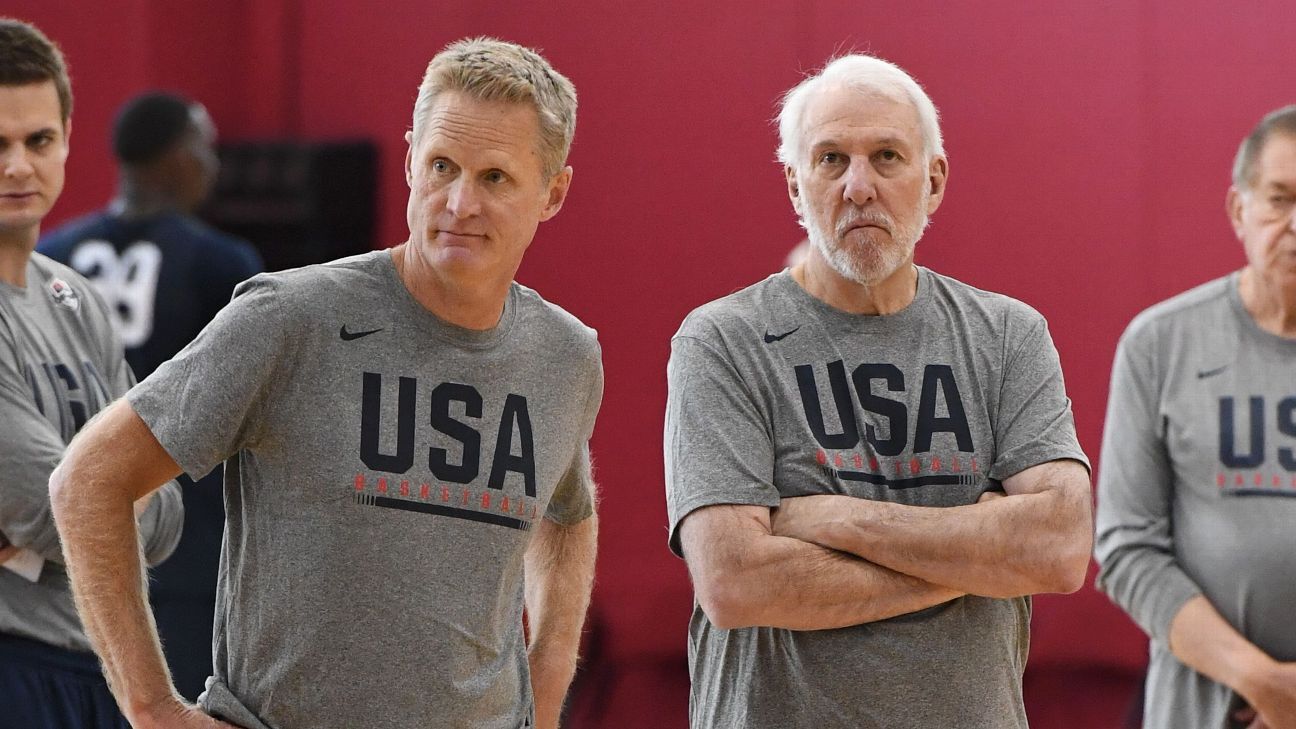 Steve Kerr saw everything that Gregg Popovich went through as coach of the U.S. men’s national team, saw exactly how difficult it was last summer for the Americans to emerge from the Tokyo Olympics with another gold medal.

And when he walked off the floor for the last time in Tokyo, he was drained.

It wasn’t, and it was just further proof that the days of U.S. cakewalks to gold are over. He decided to take the job anyway.

Kerr was formally announced as the next coach of the U.S. men’s team on Monday in San Francisco, a not-very-well-kept secret in recent weeks that the Golden State coach would be taking over for Popovich and leading the Americans — if they qualify — into the 2023 Basketball World Cup and the 2024 Paris Olympics. Kerr’s assistant coaches will be Miami coach Erik Spoelstra, Phoenix coach Monty Williams and Gonzaga coach Mark Few.

Williams has been an assistant before, under former U.S. coach Mike Krzyzewski. Spoelstra and Few were involved in coaching the U.S. select team, which was assembled to practice against the Olympic team, this past summer.

“Coaching the USA men’s national team comes with great responsibility — one that calls for a group effort with a team of coaches committed to the team, to the goal and to each other — and I couldn’t ask for a finer group of high-character individuals to help me lead our national team,” Kerr said. “Our goal, of course, is to win and make our country proud. We will work hard to do so.”

Kerr would be the 16th different coach to take the U.S. men into an Olympics. Of the previous 15, 13 have emerged with gold. His hiring for the job represents the first major decision by Grant Hill in his role as managing director of the men’s national team, the position he’s taking after Jerry Colangelo helped the Americans win the last four Olympic gold medals in that role.

Kerr has three NBA titles as coach of the Warriors, won five more as a player, was part of the staff that won gold at the Tokyo Games and won a senior-level gold medal for USA Basketball as a player in the 1986 World Cup.

“His basketball acumen, his ability to connect with people, I think his understanding and respect of the international game, along with some other factors, certainly played a role in this process,” Hill said in an interview with The Associated Press about the selection process. “As I talked to people and went through consideration, he was the perfect fit. His wealth of experiences, including that on the international stage, I think really differentiated him.”

There are plenty of parallels between Popovich and Kerr, plenty of ties that bind. They are close friends — Kerr played for Popovich in San Antonio — and both are taking the Olympic job after missing out on Olympic bids as players. Popovich tried to make the 1972 U.S. Olympic team; Kerr was a finalist for the 1988 Olympic team.

“I just did whatever he told me,” Popovich said with a smile earlier this month, when discussing what it was like to have Kerr on his Olympic staff.

The Americans are currently in the process of qualifying for the 2023 World Cup — which will end in the Philippines, the homeland of Spoelstra’s mother. A strong finish at the World Cup would be the easiest way to qualify for the Paris Olympics; simply being the reigning gold medalist and world’s No. 1-ranked program doesn’t get the Americans into the games by default.

Hill said he and Kerr have already had conversations about how to approach the next 2 ½ years in terms of building a roster, putting their own touches on the program and still maintaining the best of what has delivered results for the U.S. in the past.

“I don’t think you want to totally depart from what’s worked,” Hill said. “But I also think there’s an opportunity to press the reset button on some things and look for opportunities to improve the experience and ultimately, the goal for everyone involved. Look at this staff and they’ve all been a part of USA Basketball. Monty Williams was with Coach K’s last squad. Erik Spoelstra and Mark Few were part of this past select team. So it’s something that can be looked upon as a continuation.”