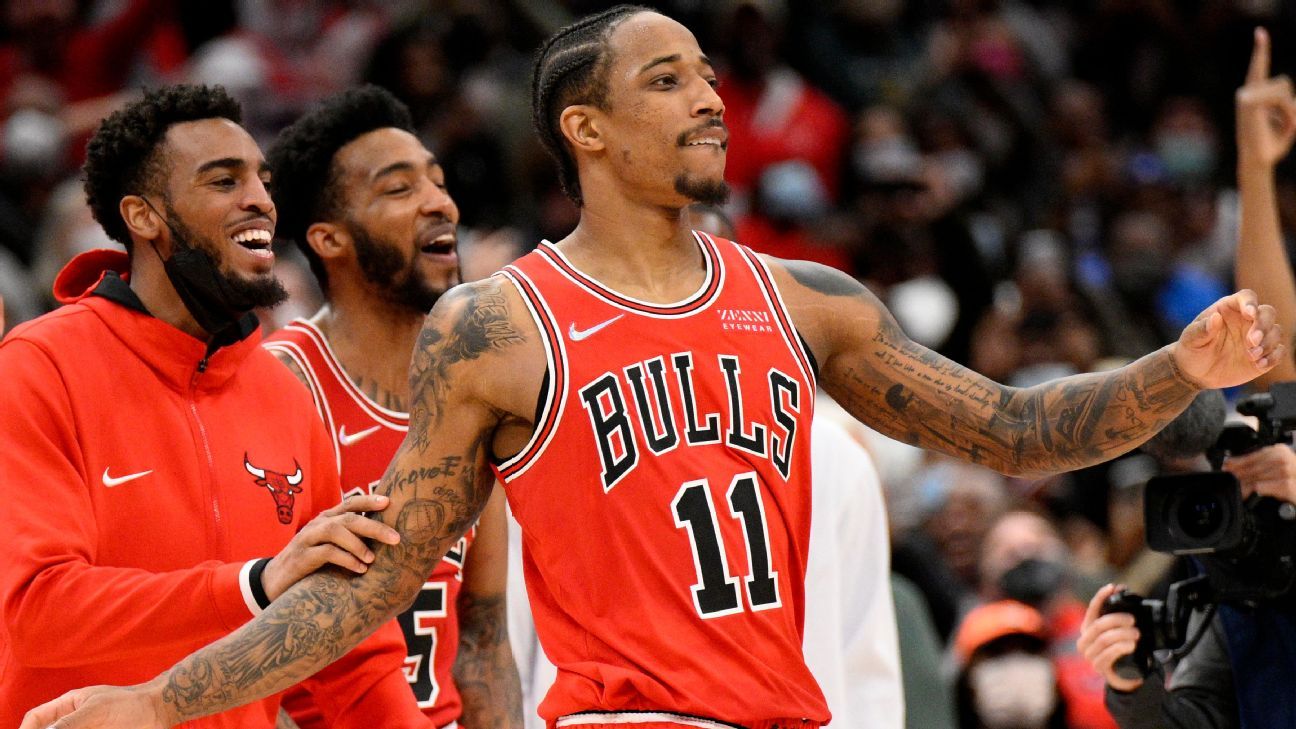 DeRozan, who hit a game-winner Friday to defeat the Indiana Pacers, is the first player in NBA history with game-winning buzzer-beaters on consecutive days, according to Basketball Reference.

“Just to hit a buzzer-beater in general is amazing, especially when you do it on the road,” DeRozan said on a video call after Saturday’s game. “I don’t know. I don’t know if I’m dreaming. If it’s real right now.”

After DeRozan caught an inbound pass from Coby White with 3.3 seconds remaining in the game, he dribbled into the corner, went for a shot fake because he figured a younger defender, like Wizards rookie Corey Kispert, would bite, and still had time to make sure he got his feet set.

DeRozan finished with 28 points, nine rebounds and five assists. His shot at the buzzer was only necessary after Kyle Kuzma hit a go-ahead 3-pointer on the previous play.

The Bulls’ winning streak, and a loss by the Brooklyn Nets, has Chicago sitting alone with the best record in the Eastern Conference at 24-10.

The Bulls have continued winning despite not being at full strength, but should be getting some reinforcements back next week. Lonzo Ball and Alfonzo McKinnie have both cleared health and safety protocols and should be on track to return for Monday’s game against the Magic. Coach Billy Donovan will be eligible to return from the league’s protocols then too.

“I’m quite relieved I can give this back to coach,” acting Bulls coach Chris Fleming said with a laugh. “I was very fortunate enough to be able to experience this from the head coaching standpoint and see the guys from a little bit of a different side.

“I told them after that I was thankful for the partnership and how hard they poured themselves into making the situation a good one. That’s pretty much how their character has been all season. They’ve been resilient, they’ve handled other blows and different guys have been out and they’ve just kept chugging.”

DeRozan has continued to be at his best in the fourth quarter. During the final period, he is averaging eight points on 53% shooting and 54% from the 3-point line. He would be the first player in NBA history to put up that kind of production in the final period, according to ESPN Stats & Information research.

For someone who thrives on mid-range shots, DeRozan is an unlikely candidate to be the only player with two-game winning 3s this season. Although DeRozan is shooting from 3 more frequently, his 2.2 attempts per game would be his highest since 2017-18 — he has still only made 25 total threes all season. Two have been game-winners.