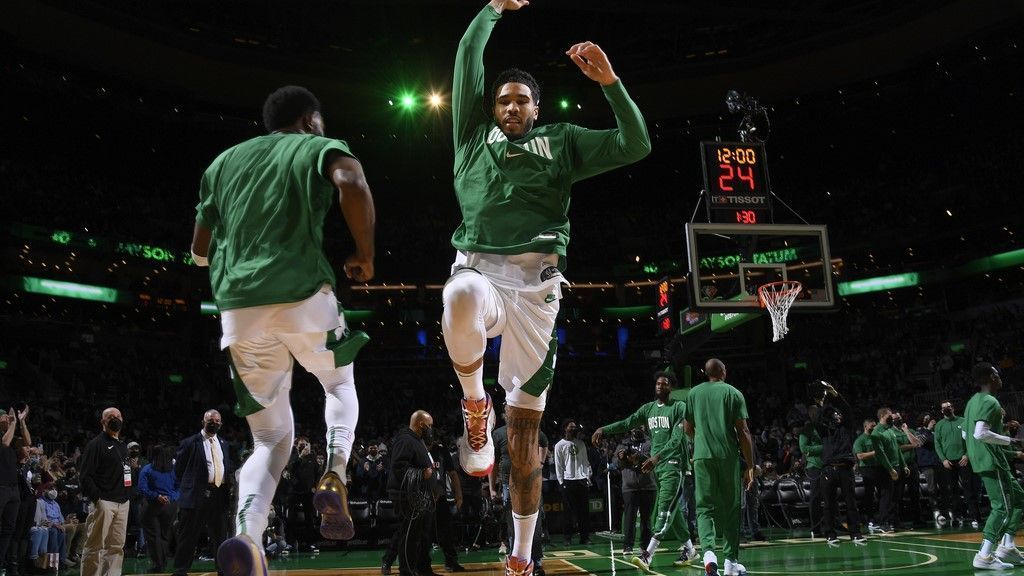 BOSTON – After Boston Celtics star Jaylen Brown produced the first triple-double of his career in Boston’s 99-75 victory over the New York Knicks here at TD Garden Saturday night, he shot down the idea that he and Jayson Tatum can’t have an effective long-term partnership.

“I think we can play together,” Brown said after finishing with 22 points, 11 rebounds and 11 assists against the Knicks, who had stunned the Celtics two days earlier at Madison Square Garden thanks to an RJ Barrett banked-in, buzzer-beating 3-pointer. “We have played together well for the majority of our career and things like that. The last year or so hasn’t gone as expected, but I think a lot of the adversity that we’re kind of going through now is going to help us grow and get better in the future.

“If we get over this slump and continue to learn, I think there’s a lot of good basketball on the other side of this. I only can control what I can control. I understand everybody has to do their jobs, but me and JT talk. We talked after the game, communicated with each other and things like that. So we’re on the same page. I get where all the other frustration comes from, but as long as I’m on the same page with him and he’s on the same page with me, that’s where we’re most focused on. So tonight we wanted to come out and get a win and we did it.”

It’s been a second-straight disappointing season for the Celtics, who are 19-21 heading into Monday’s game here against the Indiana Pacers, which will officially end the first half of Boston’s season. The Celtics are now 55-57 since the start of last season — after a stretch of three trips to the Eastern Conference finals in four seasons.

When Brown, who is averaging 24.1 points per game, and Tatum, who is averaging 25.5 points per game, share the court for Boston this season, the Celtics are 4.6 points per 100 possessions better than their opponents in over 500 minutes. But after Boston has consistently been among the top teams in the East in recent seasons, the Celtics falling into the middle of the pack has fallen on the shoulders of the team’s two young stars.

After Thursday’s ugly loss in New York, which saw Boston give up a 25-point lead — the league-leading fourth time this season the Celtics have blown a lead of 19 or more points — Brown said he and Tatum chatted about the season, and said that despite the individual and team success both have enjoyed to this point in their careers, they still have much to learn as they enter their mid-20s.

“Any time you blow a lead like that, it stings,” Brown said. “You’re not going to forget it. We learned from that experience. So that’s all it is. I know that people are tired of hearing that, but a lot of learning and growth is still taking place. I’m getting better as a basketball player. Jayson’s getting better as a basketball player and trying to put our guys in position to make them look good. It’s tougher than it looks. so we just gotta continue to get better, make the right plays, trust ourselves, trust our teammates, trust our coaching staff, and let the chips fall where they may.”

In Saturday’s rematch against the Knicks, who were down Derrick Rose, Kemba Walker and Evan Fournier due to injuries, the chips fell the right way for Boston. The Celtics took over the game once New York cooled off after a hot-shooting first quarter, as they held New York to its lowest point total in four years while also ensuring the two teams would split their season series at two wins apiece.

“I liked the way we played in the first half, then I thought in the first five or six minutes of the third we got back on our heels and then they went on a run,” Knicks coach Tom Thibodeau said.

“When you’re shorthanded your margin of error is small.”

And while Boston put the clamps on New York defensively, holding them under 20 points in each of the final three quarters, it was Brown who led the way at the other end for the Celtics.

In a season where he and Tatum have been the focus of scrutiny over their passing ability, it was a breakthrough for Brown to set a new career-high for assists in a game, in addition to claiming that first triple-double of his career, as the Celtics were able to get a victory after losses in five of their previous seven games.

“We’ve been spending a ton of time on individual film sessions, and it really started when we couldn’t get the practice time on the court,” said Celtics coach Ime Udoka, who has been vocal about wanting Brown and Tatum to grow as distributors since the preseason. “Guys got their individual work in, but we really dug into that aspect of the individual sessions, more than the team sessions, and he’s been great as far as wanting to learn and grow, and really get better in that area.

Some of the games you could see him over-thinking it at times, when to pass and when to shoot, and he’s starting to figure out that rhythm of simplicity and making the easy pass and trusting your teammates and not playing to the crowd — all of the things we preached all year.

“But it’s a balance when you’re a natural scorer, and you’re trying to shift your focus to how teams are defending you.”