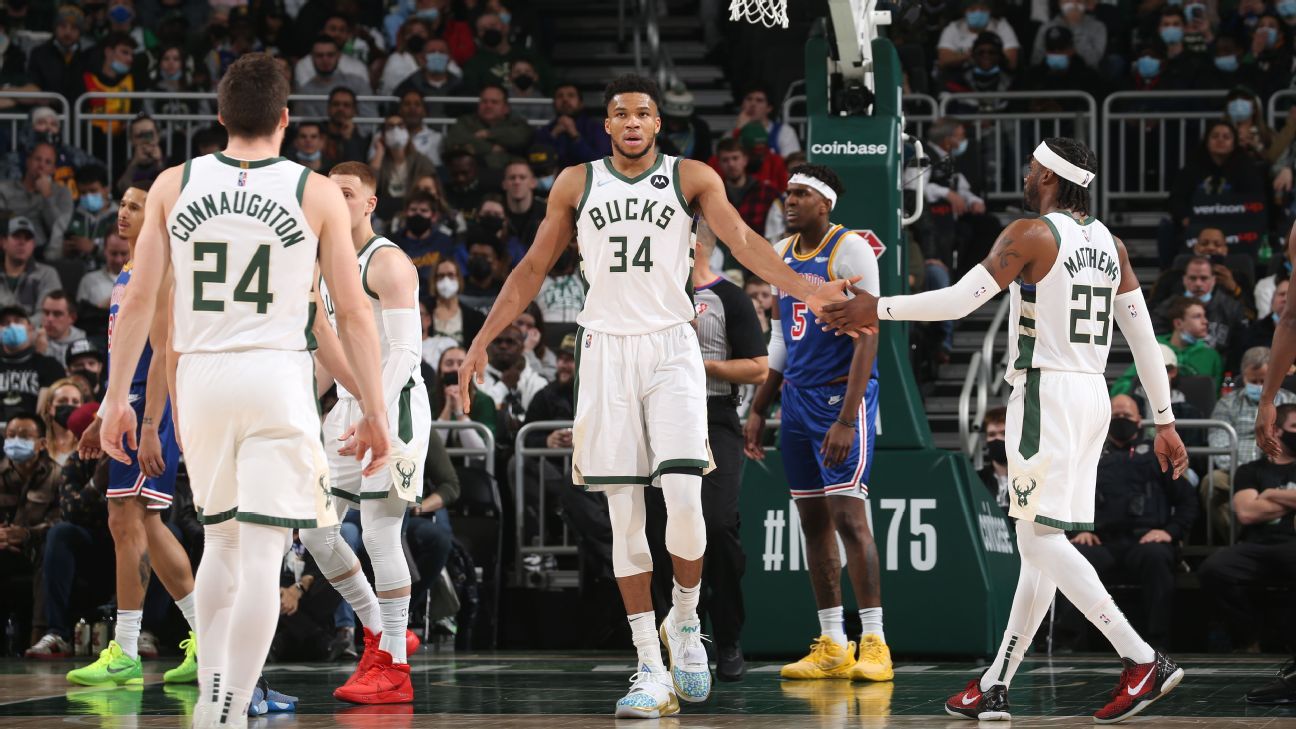 MILWAUKEE — The Milwaukee Bucks delivered another statement win on Thursday night with a 118-99 thumping of the Golden State Warriors, continuing their trend of being at their best this season when matched up against other likely title contenders.

The Bucks blitzed the Warriors from the start, jumping out to a 39-point halftime lead, Golden State’s largest halftime deficit since the franchise moved from Philadelphia.

In the past week, the Bucks have won handily against the Warriors and Brooklyn Nets —who they also beat on Opening Night in Milwaukee — a pair of teams they could see on the path to attempt to repeat as NBA champions.

“I don’t know why we play well in big games, but at the end of the day we’ve got to just keep building good habits moving forward,” said Bucks star Giannis Antetokounmpo, who finished with 30 points, 12 rebounds and 11 assists in 30 minutes. “Big games with big excitement or even games nobody watches, nobody cares about, we have to keep building good habits, so we can be good in May and June.”

Milwaukee had coach Mike Budenholzer back on the sidelines after clearing health and safety protocols but was playing without guard Jrue Holiday, their best perimeter defender, who missed his fourth straight game with an ankle. Still, the Bucks were able to contain Warriors star Stephen Curry with a smothering defensive effort.

Curry finished 4 of 11 shooting in the game (2 for 6 from 3) for 12 points. He has shot less than 50% from the field in eight consecutive games, the longest streak of his career, according to ESPN Stats & Information research. Golden State finished 3-for-14 from the field with three turnovers and seven points when the Bucks sent a double team at Curry.

“Milwaukee is a good team. They obviously have championship DNA now,” Curry said, “and present some challenges in terms of putting pressure on the interior end and spacing. We just got off to a terrible start where everything went wrong.”

The Warriors have dropped four of their past five games overall and Curry is mired in one of the worst shooting slumps of his career, but they were not panicking about their recent skid.

“To be honest, I’m not that concerned,” Warriors coach Steve Kerr said after the game. “I know we just got our butts kicked. We’re just in a rough patch in our season. Happens to every team, every year pretty much, with very few exceptions. We’re in a little bit of a rut. We played a team that was ready and played great … And so we’re a little out of sorts, and we just got to get back on track.”

Golden State will play the Bulls in the second half of a back-to-back on Friday night in Chicago. Klay Thompson, who scored 11 points on 3 of 11 shooting in 21 minutes, is not expected to play as the Warriors ease him back into action after missing more than two years because of injuries.

The Bucks, meanwhile, have continued to roll against some of the stiffest competition in the league because of dominant performances by Antetokounmpo.

On Thursday, Antetokounmpo finished a perfect 9-for-9 inside the restricted area with four dunks. He scored on four different primary defenders, (including 4-for-4 against Andre Iguodala) and hit all seven of his wide-open shots. Even when the Warriors forced him into a pass, he routinely made the right read — the Bucks shot 11 of 16 (30 points) off Antetokounmpo’s passes, according to research by ESPN Stats & Information.

“My mindset is, I have something I’m going to take it. I’m not going to second guess it,” Antetokounmpo said. “If somebody is wide open I’m going to try and deliver that ball to him. If I cannot, I’m going to see what’s next. I always try to be in the moment. But having an assertive mindset, an aggressive mindset, that’s how I start the game. That’s what I think in every possession.”