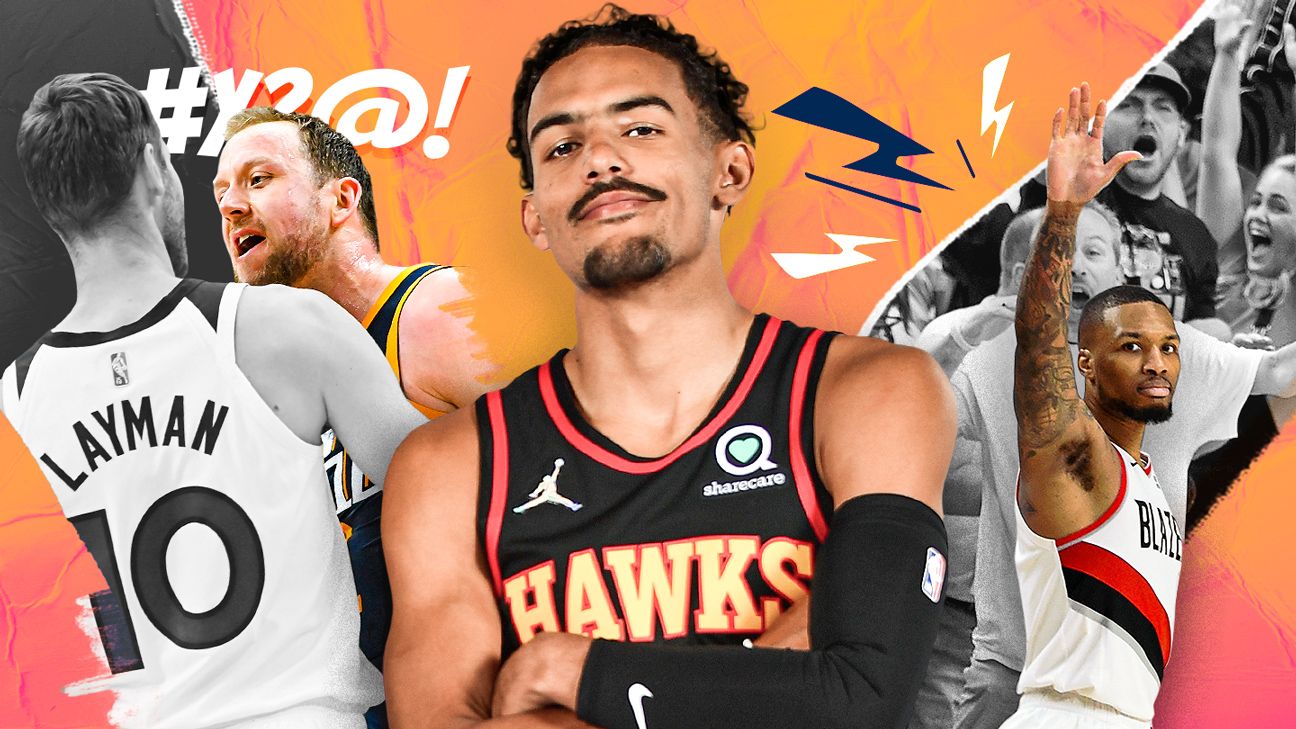 JIMMY BUTLER INTERRUPTED his pregame warmup and made a beeline toward half court. There, Utah Jazz swingman Joe Ingles stood, watched and waited as the All-Star closed in.

At this point, the quick wits, sharp tongues and competitive fires of both Butler and Ingles had been clashing for years, a powder keg sparked early in Ingles’ career when he tried to blow up a screen Butler had set. It left Ingles sprawled on the floor with the then-Chicago Bulls forward standing over him. Fortunately for Ingles, his teammate Trevor Booker pulled Butler away.

“[Butler was] staring at me like he was bloody about to beat the s— out of me,” Ingles recalled.

They never exchanged blows, but Butler and Ingles have traded trash-talking jabs every time their teams have met since, often resulting in double technical fouls and the accompanying, four-figure fines.

“OK, man, give it a break,” Butler, now a member of the Miami Heat, recalled telling Ingles during their pregame treaty. “We’ve been in this league for way too long now. C’mon, man, chill with the T’s. I want my money, you want your money. Let it go.”

The Utah forward was instantly agreeable. Butler and Ingles exchanged daps, buried their beef and protected their bank accounts.

“I was like, ‘I’m with it, because I’m trying to save some money, too,'” Ingles said. “Ever since then, we’ve gotten along pretty well.”

Said Butler: “We’ve been good ever since. He’s a good dude.”

The NBA is regarded as a much friendlier league than in previous generations, a shift that can be reflected in the nature of trash talk, or lack thereof, between players.

The days of trash-talking titans overtly jawing at opponents for 48 minutes might be gone, but the art hasn’t disappeared. Rather, it’s become more subtle, more sporadic and sometimes won’t include the “talk” at all. But the best in the game still find ways to gain an edge.

“You don’t see too much Kevin Garnett- and Gary Payton-type trash talk,” Portland Trail Blazers star Damian Lillard said. “It’s not really a verbal assault like it used to be.”

REGGIE MILLER HAD “the choke.” Dikembe Mutombo had “the finger wag.” Lillard routinely does the “Dame Time” wrist tap, but his most memorable gesture was a wave.

And it spoke volumes.

It had been chippy the entire 2019 first-round series between the Trail Blazers and Oklahoma City Thunder, with Lillard and Russell Westbrook playing leading roles.

“That was probably the most trash talk I’ve ever done in my life, like in the game, where we all was just kind of talking s— to each other,” Lillard said. “Everybody on both teams. People was getting separated. People were saying stuff after the game in the media, stuff like that.”

The series didn’t last long — Lillard made sure of it. His 50th point of the night came on a 37-footer over Paul George at the Game 5 buzzer, one of the most iconic shots of this generation and one that sent the Thunder on vacation.

“There are trash-talkers in the league,” Lillard said, “but in this era, it’s more gestures.”

Lillard cited examples such as staring down the opposing bench after making a 3-pointer, Westbrook pretending to rock the baby after scoring on a post-up and Draymond Green flexing after an and-1.

Such gestures occasionally used to mock, as was the case in another trash-talking saga featuring Lillard and George. Lillard uncharacteristically missed a pair of free throws late in a loss to the LA Clippers in the 2020 bubble, and Patrick Beverley responded by animatedly tapping his wrist, literally rolling over in laughter while on the bench in street clothes.

“I think certain players, you really can rattle. They end up being so worried about the person they’re talking to more than the coach they should be listening to.”

Beverley did his best impersonation of the goodbye wave at the end of the game, with George joining in on the fun as their howling continued well after the final buzzer.

“At that point, I was like, I’m gonna fire something back,” Lillard said. He certainly has the receipts.

“I mean, I hit a game-winner in the playoffs to send [Beverley] home [in 2014], and I did the same thing to send [George] home. Maybe they’re still upset about that.”

For Atlanta Hawks star Trae Young, his “wave goodbye” moment came during the 2021 playoffs in the world’s most famous arena.

Young is a natural showman, and the basketball world saw it last spring in the Hawks’ first-round win against the New York Knicks. Like Miller a generation ago, Young thrived in front of the Madison Square Garden crowd, which tends to be creative and colorful with its taunts.

Young got the last word — or gesture, bowing to the crowd after he hit a dagger 3-pointer to essentially end the series. Unlike Lillard’s wave to the Thunder, which he said popped into his mind “on the spot,” Young scripted his moment at MSG.

BUTLER CALLS IT “joking around.” Lillard’s definition is “showing up your opponent.” For Heat forward P.J. Tucker, it’s not trash talk, it’s being “just straight up.”

Green, the Golden State Warriors‘ All-Star forward, certainly has the gift of gab. Green’s most famous quip came at Paul Pierce’s expense during the Hall of Famer’s retirement tour of a final season, when Green yelled from the bench, “You ain’t Kobe [Bryant]! They don’t love you like that!”


Green’s mouth runs constantly, whether he’s communicating with teammates, lobbying referees or talking trash. Sometimes Green blends it up, saying things to a ref or teammate that are intended for an opponent’s ears.

And Green lit up when a listener to his podcast, The Draymond Green Show, submitted a question recently asking about the league’s best trash-talker.

“You get the opportunity to listen to the best trash-talker weekly,” Green said. “I don’t think there’s any better trash-talker in the league than me, and I stand by that. … I guarantee that.”

Other than himself, Green mentioned former Warriors teammate Kevin Durant, praising the Brooklyn Nets star for having “one-liners for days.”

Some of Durant’s quips come during game action: He’s been known to blurt “He drunk at the bar!” after making a defender’s legs wobble with a crossover. Another go-to jab occurs during breaks in the action, when Durant will ask, “Who is this?” and make a show of looking at the back of his defender’s jersey.

Green compared Durant’s style to Hall of Famer Larry Bird; trash-talkers who have the advantage of being legendary players.

“Like, if you ain’t witty enough to have [clever] comebacks, then you’re screwed.”

Then there are times when Durant gets angry — and the clever barbs mutate into confrontation. Case in point: The fiery exchange he had during last season’s Eastern Conference semifinals with then-Milwaukee Bucks forward P.J. Tucker, whose face was in Durant’s chest as Durant sneered down at him.

Kevin Durant and PJ Tucker got right into each other’s faces. pic.twitter.com/wB4IvtAUxv

“He said I fouled him,” Tucker said earlier this season. The two have been friends since Tucker played at Texas and Durant was a Longhorns recruit.

Then there was another high-profile back-and-forth late in the Nets’ Dec. 30 loss to Joel Embiid‘s Philadelphia 76ers. The stars received double technicals after barking at each other, and Embiid got the last laugh by waving Durant off the floor at the end of the game, same as Durant had done to the 76ers after a Nets win two weeks earlier.

Durant laughed when asked after the game whether Embiid, who used to pride himself on being the NBA’s premier “troll,” had said anything especially inflammatory.

“Hell no, he ain’t really say nothing. I think I just was turnt up,” Durant said. “Nah, he didn’t say nothing that crossed the line. We all respect each other out there. I respect all the players on this team and vice versa. It’s just how we play.”

ULTERIOR MOTIVES EXIST everywhere in the world of NBA trash talk. Not only are players looking to chisel their way under the skin of opponents, they’re looking to impact the box score.

Ingles uses trash talk as a strategic tactic, waiting for the most opportune time to unleash his skill set on easily distracted opponents. He notes he has the ability to talk trash while still focusing on his assignment or the scheme, which isn’t the case with all players.

“I think certain players, you really can rattle,” Ingles said. “They end up being so worried about the person they’re talking to more than the coach they should be listening to.

“They’ll break off the offense to try to attack me or try to attack whoever’s guarding them at the time instead of running the play. A lot of guys get so involved in this one-on-one battle.

Others, like Young, view trash-talking as their own personal hype machine.

Young developed a sharp tongue as a kid playing against grown men at the local YMCA because he didn’t “think they were respecting me the way I felt like they should.”

Always the smallest guy on the court but often the most skilled, Young would tirelessly taunt them.

“If I was doing something nice, I wanted to let them know about it,” Young said. “I just think that’s a sign of competitiveness and just having fun with the game.”

When Young was struggling early in his rookie season, he came to a realization that he had been too respectful of his opponents. He believes loosening his lips opened up his game.

“I was kind of looking at everybody differently, kind of more a fan of being in the NBA and a fan of the guys I was going against,” Young said. “I think after I got out of that mindset and started being who I was and being competitive — and talking a little trash — that’s when everything [unlocked].”

Then, there is Westbrook, who several players say is the most relentless trash-talker in the league. His motives? Self-motivation, players suppose.

Tucker, who acknowledges occasionally talking trash to try to energize himself when he feels lethargic, laughed as he recalled how much Westbrook would get under his skin before they were teammates for a season with the Houston Rockets.

“Then I [saw] him when we played together; he’d talk s— to get himself going every night,” Tucker said. “It has nothing to do with you. You’re just a person. You’re just the guy. It doesn’t matter who you are, what you did. You’re the guy and he’s going to talk s— to you.

Lillard, who has had his fair share of on-court battles with Westbrook, phrased it differently.

“I think,” Lillard said, “he talks to himself out there.”

Kyrie and KD learn they’re All-Star starters 😂
Grizzlies, others speak out on Tyre Nichols’ death
The Kings were making it rain ☔️ #shorts
NBA best bets today (Predictions for LeBron James, Nuggets-Pelicans on Tuesday)
LeBron was not happy after this play to win the game