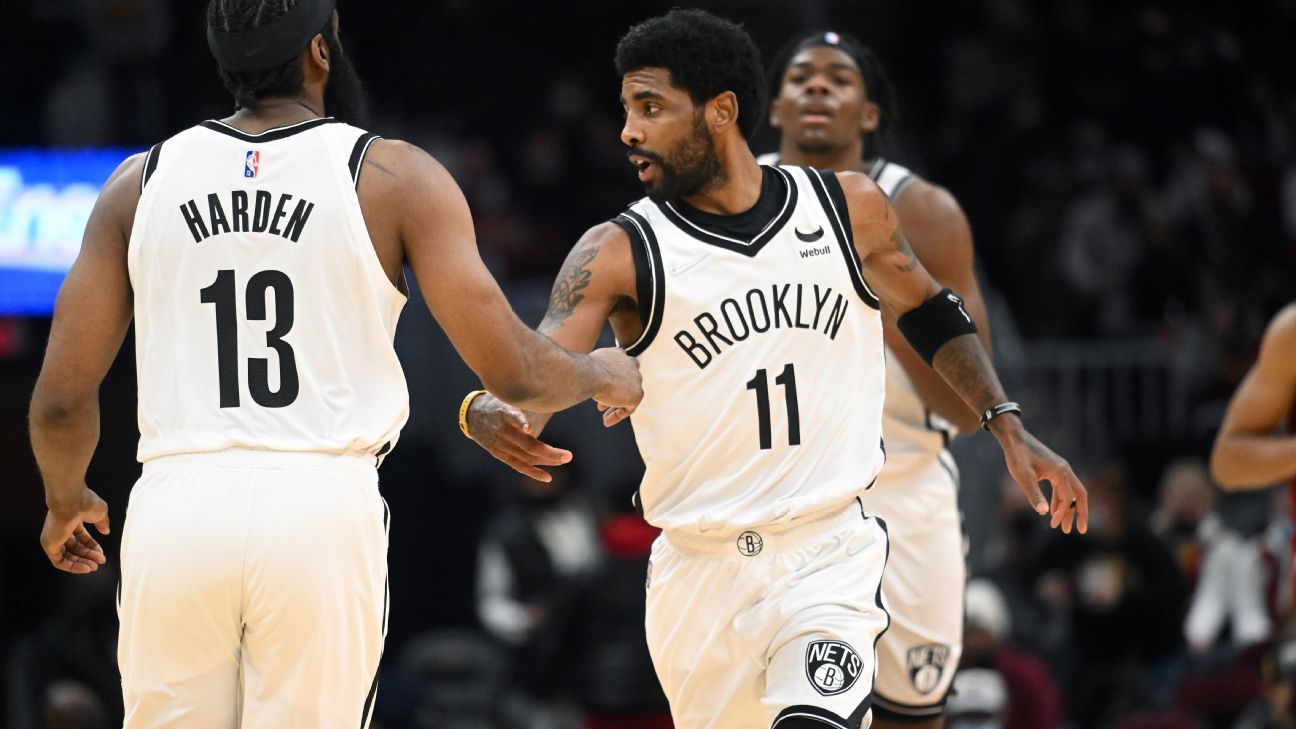 CLEVELAND — Brooklyn Nets guard Kyrie Irving made clear Monday that his stance regarding the COVID-19 vaccine will not change in the wake of Kevin Durant‘s knee injury that is expected to sideline him for four to six weeks.

Irving is unvaccinated and therefore ineligible to play at home because of a local mandate that all professional athletes playing in New York City’s public venues be vaccinated against the coronavirus. The Nets originally decided before the regular season began that they would not accommodate Irving as a part-time member of the roster, but reversed course last month after a COVID-19 outbreak decimated the roster.

Irving said that no injury or other circumstance would compel him to change his mind, emphasizing repeatedly that he stands “rooted” in his decision.

“That’s what I think comes into a lot of this culture and basketball and sport and entertainment. You bring in teams and you bring in situations,” Irving said following Brooklyn’s 114-107 loss to the Cleveland Cavaliers. “Kev’s going to heal, Kev’s going to be OK, and we’re going to have to deal with that as his teammates. But in terms of where I am with my life outside of this, I stay rooted in my decision. And that’s just what it is.

“It’s not going to be swayed just because of one thing in this NBA life. That somehow it’s brought to my attention as being more important than what’s going on in the real world. It’s just not happening for me. Again, I respect everyone else’s decision, I’m not going to ever try to convince anyone of anything or any of that, I’m just standing rooted in what I believe in. And though we’re dealing with this right now with Kev, I just know that I’m protected by the organization, I’m protected by my teammates, I’m protected by all the doctors I’ve talked to. And I just stand rooted.”

Irving scored a team-high 27 points on Monday. It was just his fourth game back this season with the Nets, who have been dealing with injuries — and other distractions — since acquiring James Harden to play with Irving and Durant.

During his postgame interview, Irving said he’s bothered that his decision is being questioned and that it’s almost always framed in the context of his profession — not his personal life.

He said at one point, “I’m not bringing science into a basketball game” and later reiterated a sentiment that he has often expressed: “My message has always been I respect what everyone else is doing with their bodies, I respect what everyone else is doing in terms of their livelihoods and I’m here to support, but what’s going on with me is I’m taking it one day at a time, that’s it.”

When pressed during a back-and-forth, Irving was told that there are millions of people who are interested in his status because of the ramifications on his playing time.

“That’s what I’m saying,” Irving said. “You’re bringing my vaccination status into a basketball game, and I live my life, the majority of the time, when I’m away from this. So when I say I’m not getting vaccinated and I’m making a choice with my life, somehow it gets mixed into, ‘Well, what about the basketball?’ When it’s like no, bro. We live in a real world. It’s great to be able to do this. I’m grateful for the opportunity. I love being with my teammates. I love playing on the Nets, but I’ve already been away enough time to think about this, to process it, to be able to make this decision, stand strong, understand that people are gonna agree and some people are gonna disagree.

“The circumstances that are at hand, I’m praying that they get changed and we’re able to do things differently and that’s not just for me — that’s for all those that are dealing with being unvaccinated and getting fired from work on a day-to-day basis. It’s not just about me. That’s been my message this whole time. So though I feel your feeling and emotion for asking that question, it’s just like, sometimes it feels a little disrespectful. I’m not just a basketball player, bro. Millions of fans. I appreciate all of it, but it’s not just about the game.”

After being told that he’s one of the most famous unvaccinated people in the country, Irving responded, “That sounds crazy to me … but I’m not the only one.”

“Fame is socially created, bro,” Irving said. “I hear what you’re saying … Like being the most famous unvaccinated player, what does that even mean? I don’t even know what that means at home.”

Irving was told that in the short term, that meant that he couldn’t play in home games, which is why there is both a lot of interest in his status and some frustration within the Nets fan base.