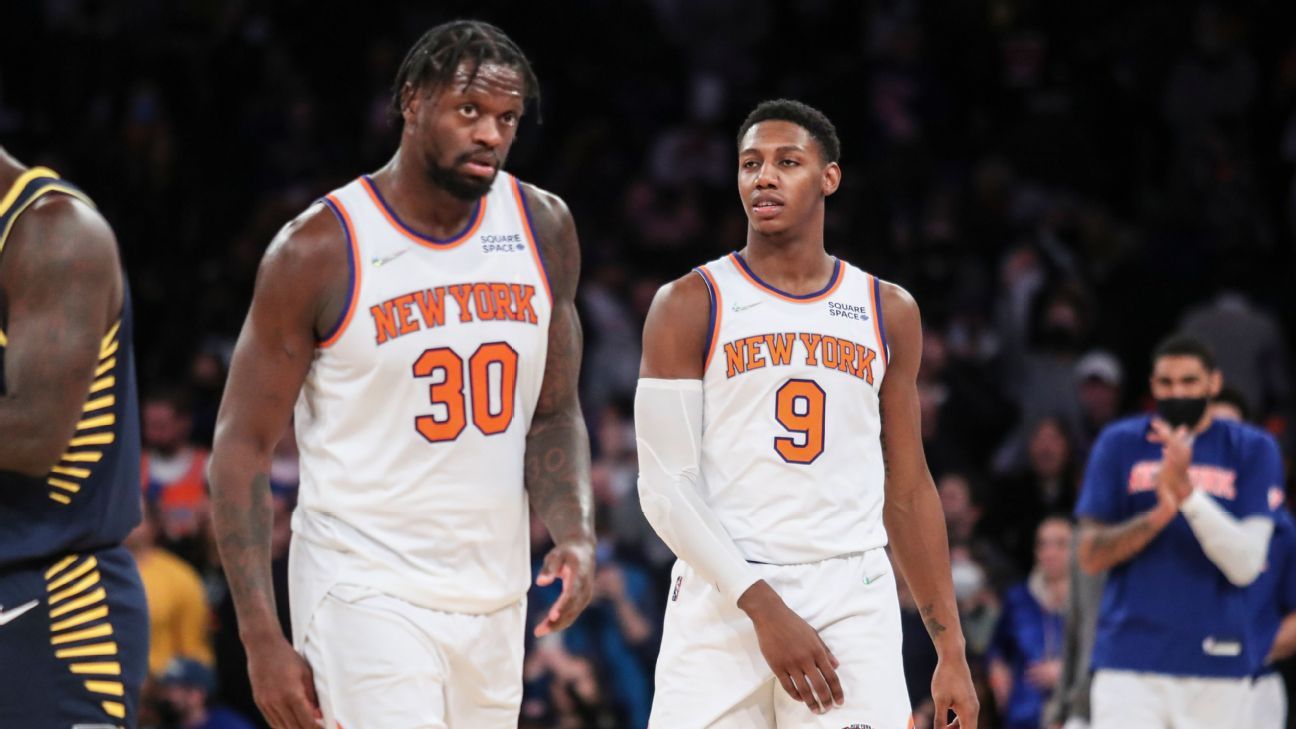 MADISON SQUARE GARDEN had just played host to one of the season’s most thrilling comebacks. It was Jan. 6, and New York Knicks fans had witnessed a ridiculous buzzer-beating bank shot 3-pointer by RJ Barrett that capped a 24-point rally and win against the Boston Celtics.

It was the Knicks’ fifth victory in their last seven games and a reason for excitement in the home locker room. But for Julius Randle, whose 22 points and eight rebounds aided New York’s great escape, something seemed off when he sat down at the podium.

Randle’s answers were clipped, and terse. After a couple minutes of awkward silences and short replies, he was asked what message he was trying to send by giving a thumbs down to the hometown fans following a bucket midway through the fourth quarter.

“Shut the f— up,” he said, responding to the MSG fans who had rained down boos early in the game with the Knicks trailing by double figures.

It was a sudden release of frustration — emblematic of a season that hasn’t gone how Randle or the Knicks had hoped. The feel-good story he and the Knicks authored during a spirited run to the 2021 Eastern Conference’s No. 4 seed had dissipated with mounting losses through the first half of the 2021-22 season.

After breaking a seven-year playoff drought, the pillars of New York’s run — combined with the franchise’s offseason roster additions — have yielded mediocre results as the Knicks find themselves fighting for a spot in the play-in.

It all leads to one question: Which ending — last season’s frantic finish for home-court advantage or another seat at the lottery dais — is ahead for the Knicks?

“[The Knicks] are a classic example,” an Eastern Conference executive said, “of what happens when you go from the hunter to the hunted.”

Those pillars of last season’s surprise run have teetered on the edge of collapse.

Some of that could be expected; even this year’s 31% clip from behind the arc is the third highest of Randle’s career. But Randle also ranks among the top five in difficulty of shots created off the dribble, per Second Spectrum’s tracking. He has also run a league-leading 651 isolation and post-up plays this season; among the 31 players who have run at least 225 such plays, Randle ranks 27th in efficiency.

Randle has seen his points per drive drop from 1.12 last season — which was just outside the league’s top 10 — to 1.03, which ranks 32nd out of 63 players with at least 100 direct drives this season, per Second Spectrum.

“They thought they had a guy they were going to be able to build around, and acted that way,” a Western Conference scout said. “It may not be the case.”

Said a second Eastern Conference executive: “He is still good, but he’s not an All-NBA player like he was last year. That’s a big difference.”

The Knicks have stood behind Randle. Coach Tom Thibodeau has pointed out the ways his struggling star is impacting the game beyond making shots, while teammates have preached the importance of his energy on the court.

But while the offense — Randle’s in particular — has been troublesome, the team’s defense has been a larger issue. Thibodeau, a defensive guru, is overseeing a team that slipped to 16th from its fourth-ranked unit last season.

Two of the main reasons: poor transition defense and a sharp decline in 3-point defense. The transition numbers are ugly, as New York went from ranking 11th last season to 27th this season, allowing 1.33 points per possession.

And the Knicks were the NBA’s best team at defending opposing 3-pointers last season. They were also the luckiest. The 2.3% gap between what their opponents shot (33.7%) and what they were expected to shoot (36.0) was easily the biggest difference in the league, per Second Spectrum tracking, nearly twice as big as the second-place Utah Jazz.

This year, that gap has dropped to 1.3%. As a team, the Knicks have dropped to 15th overall in opponent 3-point percentage allowed.

Rose, meanwhile, has been sidelined since Dec. 16 with a right ankle injury that will keep him off the court until near the All-Star break in mid-February.

The 33-year-old guard, who reunited with Thibodeau at last season’s trade deadline, has been the leader of a bench unit that routinely outperformed the starting unit; the Knicks are 9.8 points per 100 possessions better with Rose on the court.

The team’s best and most consistent offensive threat during its first-round loss to the Atlanta Hawks in last year’s playoffs, Rose averaged 19.4 points per game and hit over 47% of his 3s in the series as the Hawks successfully limited Randle’s impact.

“Just having his leadership out there, just making the game a lot easier,” Knicks forward Taj Gibson said about Rose’s impact on the Knicks. “He makes it a lot easier for the young guys, too. But then, at the same time, just having him not here, a lot of guys had to step up.”

Enter Barrett, who through the first half of the season failed to build on the career-best numbers he flashed in his sophomore campaign.

But after averaging 15 points on 40% shooting through the end of December, Barrett has started to turn things around in 2022. He’s averaging 23 points in January on 45% shooting from the floor and 44% from 3-point range, including three 30-point performances — matching the number he’d had in his first two-plus seasons.

After missing six games in mid-December due to COVID-19, Barrett said last week he’s feeling good physically again. His play has backed up that belief.

Barrett spent three games hovering in the mid-20s in minutes while he improved his conditioning, then scored 26 points against the Oklahoma City Thunder on New Year’s Eve. Since then, his play has taken off — the 21-year-old wing has averaged 23 points, 6 rebounds and 3.3 assists per game since, and hit over 44% of his shots from 3.

“There’s no ceiling really on what he can do,” Knicks guard Evan Fournier said recently of Barrett. “When he scores on all three levels, he becomes less predictable. So that allows him to do what he does best, which is be aggressive and drive.

“When he plays like that, it makes the job easy for everyone because he draws a lot of attention and he’s a willing passer. So hopefully he [keeps] it going.”

THE KNICKS CONTINUED the process of remaking their roster last week, when they moved Kevin Knox and a protected 2022 first-round pick to the Atlanta Hawks for forward Cam Reddish, a former lottery pick and Duke teammate of Barrett’s whom they hope can improve with a change of scenery.

New York’s offseason splashes — signing Kemba Walker off waivers and adding Fournier via sign and trade with the Celtics — haven’t had the impact the Knicks hoped, particularly in boosting New York’s offense, which continues to rank among the league’s bottom third.

Alan Hahn speculates that the Knicks might make another move to complete the team after trading for Cam Reddish.

Walker was benched early in the season after New York’s starting lineup was getting outscored by more than 15 points per 100 possessions while playing more minutes than any five-man unit in the NBA at that time. Walker only returned to the court when Thibodeau had no choice but to play him after the team’s COVID-19 outbreak.

Walker was brilliant in late December, but, after playing nearly 36 minutes per game over a six-game stretch, he missed three weeks with knee soreness before returning Tuesday.

Some of the Knicks’ issues this season are out of their control. The most prominent is something they haven’t experienced in almost a decade: the burden of expectations.

Last season, the Knicks were predicted to finish with one of the league’s worst records. So hovering around .500 halfway through the season was deemed a success — and stampeding home with 14 wins in their final 18 games was hailed as a remarkable achievement. Following up with a nearly identical record at this same point was never going to be celebrated the same way.

“It’s a long season,” Thibodeau said. “We started last season like this as well.”

One problem: This isn’t last season’s East. The Chicago Bulls and Cleveland Cavaliers — two of the East’s bottom five teams last season — are currently among the group battling for the conference’s best record. The Toronto Raptors, following a 12th-place finish while playing home games in Tampa, Florida, in 2020-21, are back in the mix as a play-in contender.

New York does own the second-easiest remaining schedule in the league, according to ESPN’s Basketball Power Index, but last season’s No. 4 seed appears to face a steep climb to return there.

“It’s hard to argue [the Knicks] should be anything other than what they are right now,” a Western Conference executive said. “I don’t think Julius is going to suddenly be more efficient, and I don’t think Kemba, Fournier or even Rose — when he’s healthy — are going to get better defensively.”

Added an Eastern Conference scout: “Everything fell into place for them last year, and they haven’t been able to repeat it.”

And while the Knicks have won five of their last eight games, they still have a ways to go to replicate last season’s formula — a stout defense paired with just enough offense led by Randle, Barrett and Rose — and prove its 2021 playoff run wasn’t fool’s gold.

“Each day you can’t look backwards [and] you can’t look too far down the road,” Thibodeau said. “You just have to look at today. Put everything into today.”

Warriors were HYPED for Klay’s return 🔥🙌 | #shorts
Light 👏 The 👏 Beam! 👏 Kings blow out Grizzlies by 33 😳
Kyrie Irving predicted Donovan Mitchell’s big night after Call of Duty session
Grizzlies vs. Warriors prediction and odds for Wednesday, January 24 (Back Golden State)
NBA Trade Grades: Lakers land Rui Hachimura for next to nothing