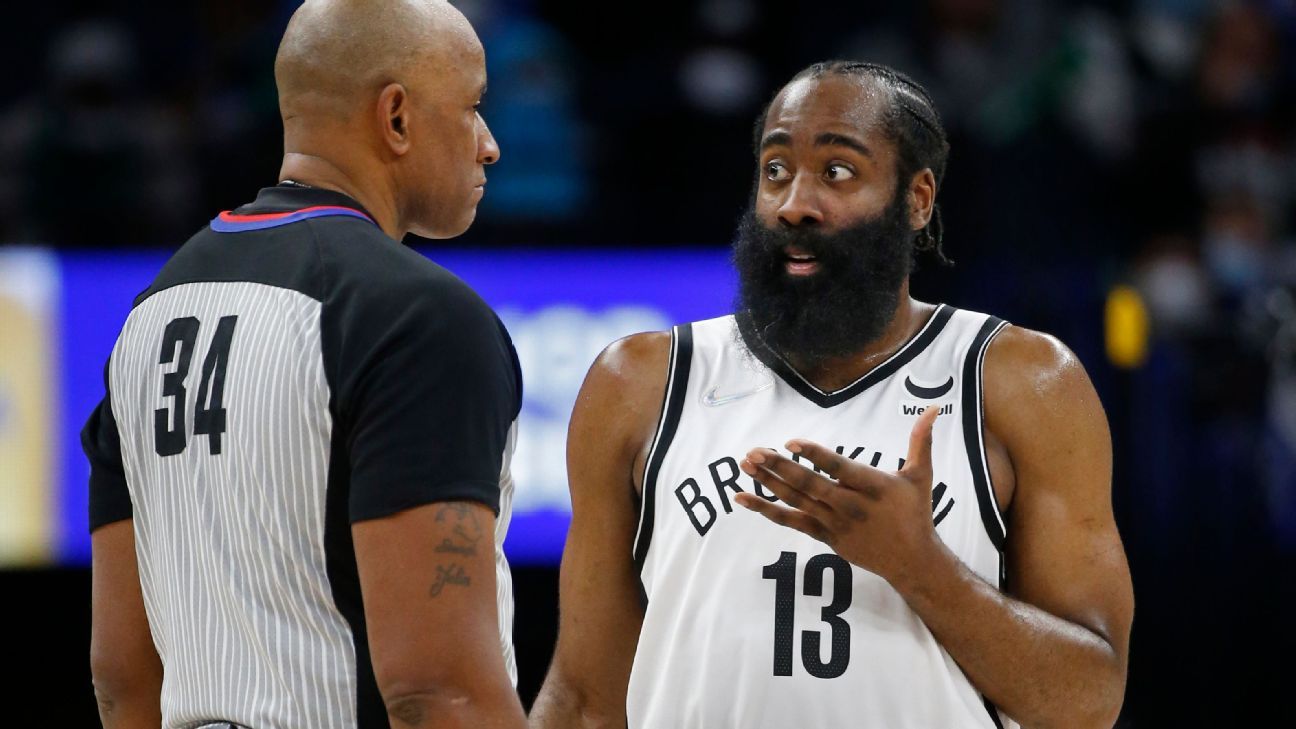 MINNEAPOLIS — Brooklyn Nets guard James Harden does not believe he is getting the benefit of the whistle the same way he did in years past.

The 32-year-old made that clear after getting to the line only four times in a 136-125 loss to the Minnesota Timberwolves on Sunday night. When asked why he feels he isn’t getting the same calls he used to get, Harden acknowledged that he didn’t know the answer.

“It’s a good question,” Harden said. “I don’t know. I don’t even want to talk about it. But it’s definitely — when I get to the basket, it’s the same calls the guys are getting. Obviously, you can’t call all of them. But there’s ones where there’s clearly stiff-arms and trips and things like that. But on the other end, there’s no consistency. So it’s frustrating.”

“I think there’s nights where it’s fair, and even including the points of emphasis this year,” Nash said. “Then there’s other nights where it feels like he gets targeted a little bit. It just automatically gets lumped into that point of emphasis where he is creating the foul, which is not always the case at all.”

The points of emphasis Nash referred to is in regard to the NBA altering the way specific sequences were called before the season — especially offensive players trying to create contact and draw more free throws. Both Harden and the Atlanta Hawks‘ Trae Young figured to be affected more than most players because of the way they were consistently able to get to the line.

The interesting part about the rule shift is that Harden is actually getting to the foul line almost once more per game this season (8.2 attempts) compared to a year ago (7.3 attempts). Still, throughout the season there have been many examples of Harden driving to the basket and then not getting the same whistle he’s gotten earlier in his career.

Harden said he’s struggled to get an explanation from the officials when asked for one throughout the season.

“Nothing,” Harden said. “Honestly, nothing. Like [officials say], ‘I didn’t see it,’ or ‘I didn’t think it was a foul.’ But it’s like, clear. It’s like extremely clear. I don’t want to talk about it. But I just got to keep going. That’s not going to stop me. Keeping going to the basket, keep being aggressive and keep making plays for my team.”

Nash said that he feels Harden is the poster child for the new emphasis from officials this season.

“I think it’s been well-documented that he’s one of the poster-childs,” Nash said. “I think the start of the year was rough, [the officials] were really trying to correct the point of emphasis. I think they over-corrected. Now we come back to the middle, but tonight was one of those nights where I felt like some of the calls that should go his way didn’t.”

Despite what he felt was a lack of calls on Sunday, and at times throughout the year, Harden admitted being a little “passive” during Sunday’s 4-for-13 performance.

Despite Harden’s frustration, Nets guard Kyrie Irving is confident his teammate will continue to adjust to the way the game is being called throughout the season.

“And depending on the [officiating] crew we have, I think that also has an effect on it, but we just want to start off the game with a consistent whistle. And when he’s going in there and he’s creating some contact, we feel like he deserves that respect. We know who he is. We know he gets to the free throw line. A lot of his drives downhill he is getting fouled. And some of them can go either way, but we just want to have a consistent whistle.”