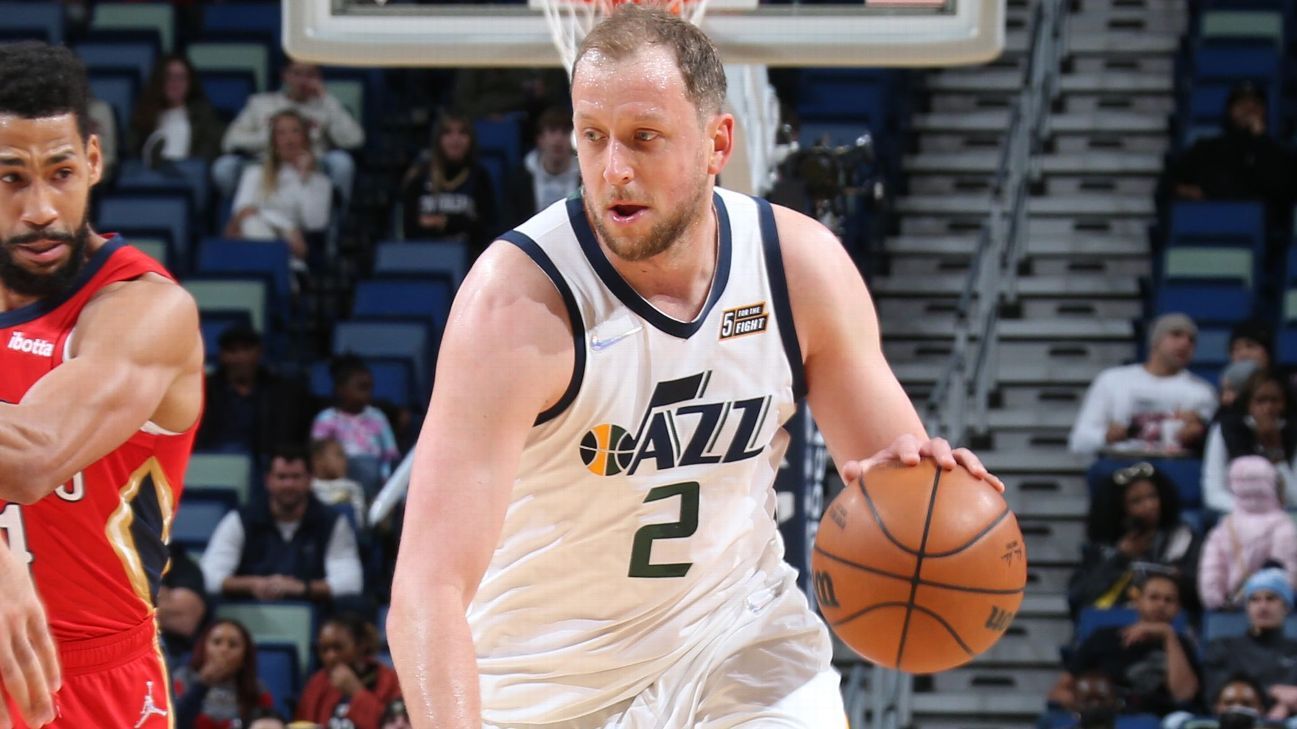 SALT LAKE CITY — Joe Ingles appreciates all the well-wishes and support he has received in the days following his serious knee injury, but the Utah Jazz forward wants to make one thing clear: His NBA career is not over.

The 34-year-old Ingles, who will soon undergo surgery to repair the torn ACL in his left knee, is determined and confident that he will return strong after a grueling rehabilitation process that could last into next season.

Ingles, the runner-up for Sixth Man of the Year last season who has been an essential role player during his eight-year Jazz tenure, insists that he will continue to be a quality contributor after his comeback.

“Literally no doubt,” Ingles told ESPN. “I know probably everybody says that when they’re going through this. A few days post-injury, people might think I’m a little bit crazy. But you look at people who have been through this. The MRI was a little bit of a win, I guess, with it just being my ACL.

“Then the other part of it — and we joke about it — is my game. My game has never been based on athleticism, above the rim or anything like that. I’m not writing off what this surgery is and what the rehab looks like, but everyone around the league knows how I play and what I can do.”

Ingles said he struggled emotionally after his knee buckled and collapsed on a drive to the basket during Sunday’s loss to the Minnesota Timberwolves. He had not suffered a serious injury since breaking his foot at age 15 and had the NBA’s longest active games played streak at 384 before sitting out due to Achilles soreness last season.

He chuckled about the outpouring of sympathy he has received this week. A longtime friend told him that a television station in his native Australia was reporting breathlessly about “his career hanging by a thread.” One of his countless Twitter mentions suggested that the Jazz should have had a moment of silence to honor him before Wednesday’s home game.

“Just kind of flipping through social media, it was almost like I was dead or I was dying,” said Ingles, who is known for his self-deprecating sense of humor. “I’m like, what are we talking about?”

Ingles, who has been with the Jazz after being claimed via waivers when he was the final cut by the LA Clippers in the 2014 preseason, has averaged 8.6 points and 3.8 assists per game in his NBA career, developing into a premier 3-point shooter (.408 career percentage) and secondary facilitator. He has also emerged as a leader in the Utah locker room, fixture in the Salt Lake City community along with his wife, Renae, and cult hero for Jazz fans.

However, Ingles recognizes that he might have played his final game in a Jazz uniform. He is being paid $14 million in the final season of his contract, and Ingles is aware that he was involved in trade discussions before his injury and that his expiring deal could still be considered a movable asset. He intends to enter free agency with an open mind.

“If I’m able to get someone back that would help them make a push for the end of the year, I understand that,” Ingles said. “I’m not going to sit here and be sour and upset. I’ve built my eight years here of hard work and in the community and all that stuff, but I’m very well aware of the business side and all that.

Ingles said he hadn’t considered playing for another team, calling himself “very lucky to have been here as long as I have been.”

“Having an ACL obviously throws a bit of a spanner [wrench] in the works with some of it, but I have good relationships with the Jazz and the front office and coach [Quin Snyder],” he said. “I’ve got the best agent [Mark Bartelstein] in the league. It’s a very fluid conversation, and we just have open lines of conversation.”

Ingles’ immediate focus is putting together a team of “the best people” — led by his wife, a former netball star in Australia — to guide him through his recovery. He has consulted with two doctors and plans to talk to at least a couple more before determining which surgeon will perform his operation. With help from the Jazz, he will also have highly accredited physical therapists, athletic trainers and a psychologist assisting him on his journey back into NBA action.

“There’s going to be bumpy roads, and I’m going to have setbacks,” said Ingles, who starred professionally in Australia and Europe before his NBA career. “I’m very aware of what injuries are and have seen people go through this. From Australia to America to overseas, I’ve got contacts and friends and people all over the world. I’m going to make sure I have the best of the best looking after me and helping me.

“I still love playing. I want to play in the NBA. I’m not trying to play anywhere else right now. The goals I’ve got and have had haven’t changed. It obviously puts a little mountain over the top of it, and I’ve got to get over that mountain to get where I want to get to, but I’m very confident with my work ethic, with my wife’s demanding persistence of perfection. I’m very, very confident.”

The Celtics have been the one constant in LeBron’s career
Agent: Turner, Pacers reach 2-yr., $60M extension
Dubs dig in as Steph tossed for mouthpiece throw
Durant progressing, out at least 2 more weeks
NBA Mock Draft: Who is going to get Victor Wembanyama?