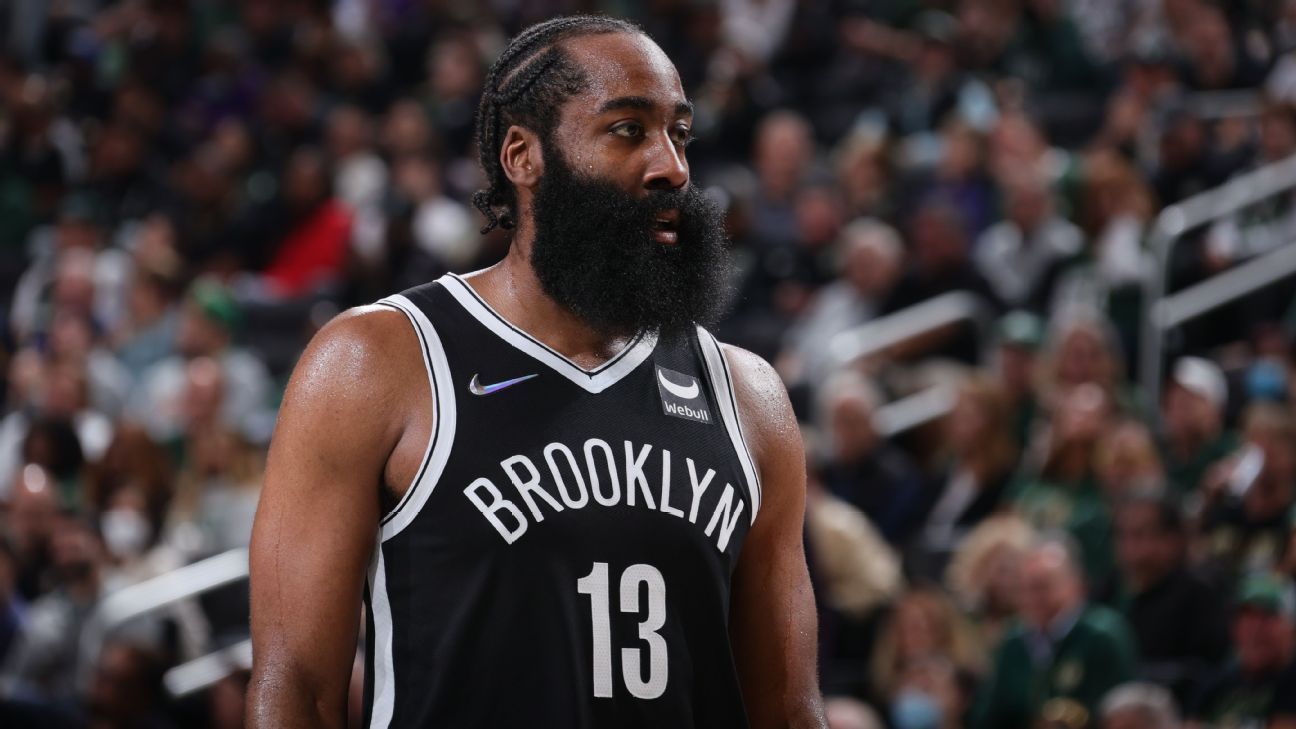 DENVER — The Brooklyn Nets do not plan to trade James Harden prior to Thursday’s NBA trade deadline. Nets coach Steve Nash made that clear before Sunday’s game against the Denver Nuggets as Harden’s name continues to pop up in trade speculation.

Nash also said Harden has repeatedly told him that he wants to stay in Brooklyn for the foreseeable future.

After Harden turned down a three-year, $161 million extension in the offseason, he has four options available to him after the season, as ESPN’s Bobby Marks notes. The first is he could exercise his $47.4 million player option for next season — and extend for an additional four years and $222.8 million with the Nets. If he declines his player option, he can sign a five-year deal with the Nets worth $269.8 million, essentially the same figure as the first option.

The third option is that if Harden declines his player option, he can sign a four-year, $200 million contract with a team that has cap space. As Marks points out, the only teams projected to have that kind of room are the Detroit Pistons, the Orlando Magic and the San Antonio Spurs.

The final option, if Harden were to decide he wanted to go to a specific team, would be to exercise his player option and then sign the four-year, $222.8 million extension six months after a trade is completed. Much of the league speculation about this scenario centers on a possible reunion with Daryl Morey, who was general manager during Harden’s time with the Houston Rockets and who is now president of basketball operations for the Philadelphia 76ers. This would not hard cap the Sixers and it would allow the Nets to take back players in a deal, Marks notes.

Nash sounded outwardly confident Sunday that the communication between Harden and the organization remains strong.

“This has been a constant thing since the summer,” Nash said. “He’s continually reiterated that he wants to be here. And we’ve continually said that we want him here and that that’s our best chance to win so nothing’s changed from the communication that we’ve had.”

In the short term, Harden missed his second straight game Sunday because of left hamstring tightness. He had an MRI on Saturday in Utah that showed there was tightness, but the Nets are hopeful the issue will resolve itself with more rest.

“The scan is pretty good,” Nash said. “But there’s a tightness and a strength deficit, so for us we just don’t want to take any chances. We know last year we lost him for an extended period; we want to be conservative and make sure he resumes full strength so that there isn’t an extended absence.”

Harden also missed a Jan. 26 loss to the Nuggets with the same injury. The Nets, who had lost seven straight games entering Sunday, return home Tuesday against the Boston Celtics.

“It’s day-to-day,” Nash said. “It’s a matter of does that strength get back to where we feel confident and he feels confident that we’re not risking anything. That’s what we’re dealing with right now.”

Nash also said there is no specific timetable for Kevin Durant‘s return as he recovers from a sprained MCL in his left knee but that the Nets are pleased with the way his recovery is coming together.

“We feel really good about his recovery so far,” Nash said. “I think he’s well on his way. There’s been no setbacks and everything’s gone to plan or then some, and so we feel really positive about the progress he’s making and that a return will be a full one and hopefully not in too long a period.”

ESPN’s Adrian Wojnarowski reported after the injury, which occurred in a Jan. 15 win, that the Nets were optimistic Durant would be out only four to six weeks.

“Kevin’s good,” Nash said. “I think he’s working away back home with our physios and strength coaches, that we kept a little team behind for him and LaMarcus [Aldridge], and so Kevin’s excited to be back on the court shooting a little bit, he’s got a ways to go, but his progress has been great and I think he’s gotten a lift by being back out there and touching the wood as he always says and shooting the ball.”

NBA Trade Rumors: New teams interested in Jakob Poeltl?
2023 NBA Mock Draft 3.0: Blazers and Bulls find new life
The Celtics have been the one constant in LeBron’s career
Wolves have a decision to make about D’Angelo Russell before trade deadline – Woj | NBA Countdown
Brown vows to be better after missed FTs sink C’s