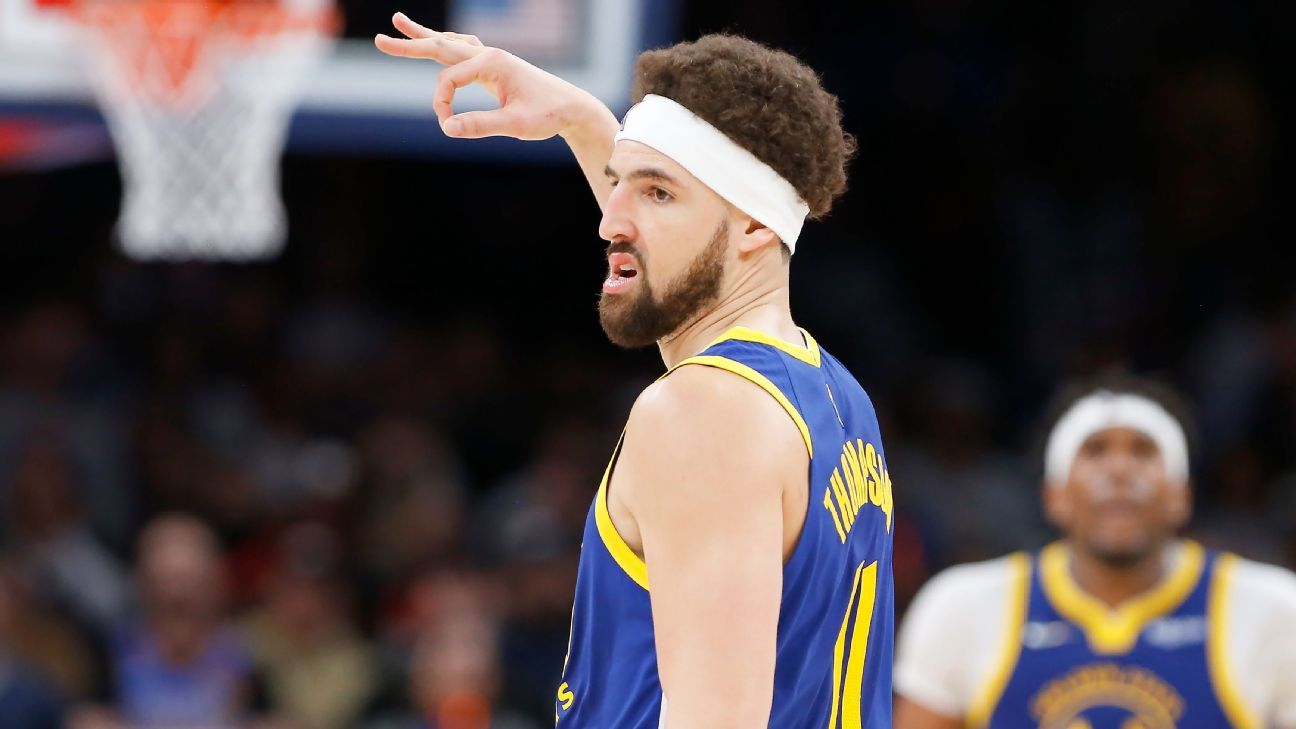 OKLAHOMA CITY — As the Golden State Warriors took on the Oklahoma City Thunder on Monday, Klay Thompson said he tried not to think of the night six years ago when he torched OKC, knocking down 11 3-pointers in the Western Conference Finals.

But as he knocked down two back-to-back 3s to seal the Golden State’s 110-98 win, it was hard for him not to go back to that Game 6 performance in 2016. He even repeated the same words he said all those years ago: “This is my house.”

A lot has changed for Thompson since that game. But Monday’s game was a sign for him that he was on his way back to who he was before he was forced to sit out two-and-a-half years with consecutive ACL and Achilles injuries.

Thompson’s game-winning shots capped off a night that saw his minute restriction increase get bumped to 30 minutes, as he finished the night with 21 points in 29 minutes.

“That’s a huge milestone for myself and hopefully I can build on it,” Thompson said. “I feel incredible…. I feel like I haven’t missed a beat only 12 games in.”

“It was awesome just to have Klay back in crunch time,” Warriors coach Steve Kerr said. “Knowing the defense was going to be heavily slighted toward Steph [Curry] and for him to get free and knock down a couple of shots, it was really fun to see.”

The majority of Thompson’s minutes came in the second half, as he played just 11:37 minutes in the first half, and then 17:21 through the final two frames.

According to Kerr, this was by design to allow Thompson to be available in any late-game situation they’d need him for.

As Thompson’s minutes continue to increase, the hope is also that this helps settle the Warriors’ rotation. Granted, there are certain aspects of the rotation that won’t be settled until they are closer to full strength — they are still without Draymond Green, James Wiseman and Nemanja Bjelica. Andre Iguodala returned for the first time in nine games but left after the first half due to lower back tightness, which Kerr says he’s “definitely concerned” about.

But, at least having Thompson retain his normal minutes will allow for some rotational clarity.

“Meaning we don’t have to think about it,” Kerr said. “Like, we don’t have to pull him out. He might be going really well and we can play him a few extra minutes without having to follow really strict guidelines.”

And if he’s not having a hot shooting night, it will allow him more time to find a rhythm. That’s what happened in Oklahoma City on Tuesday.

While Thompson hit the two game-winning shots for the Warriors, that sequence wasn’t reflective of his overall night. He shot 6-of-15 from the floor, including 3-of-8 from 3. Up until the final seconds of the game, he was 1-of-6 from beyond the arc.

But it didn’t matter.

“There just confidence knowing he still has that instinct and no matter how the game is going up to that point … he’s still got the shooter’s DNA of the next shot is going in,” Curry said. “As his minutes ramp up, you’ll continue to see those high peaks and Klay going nuts.”