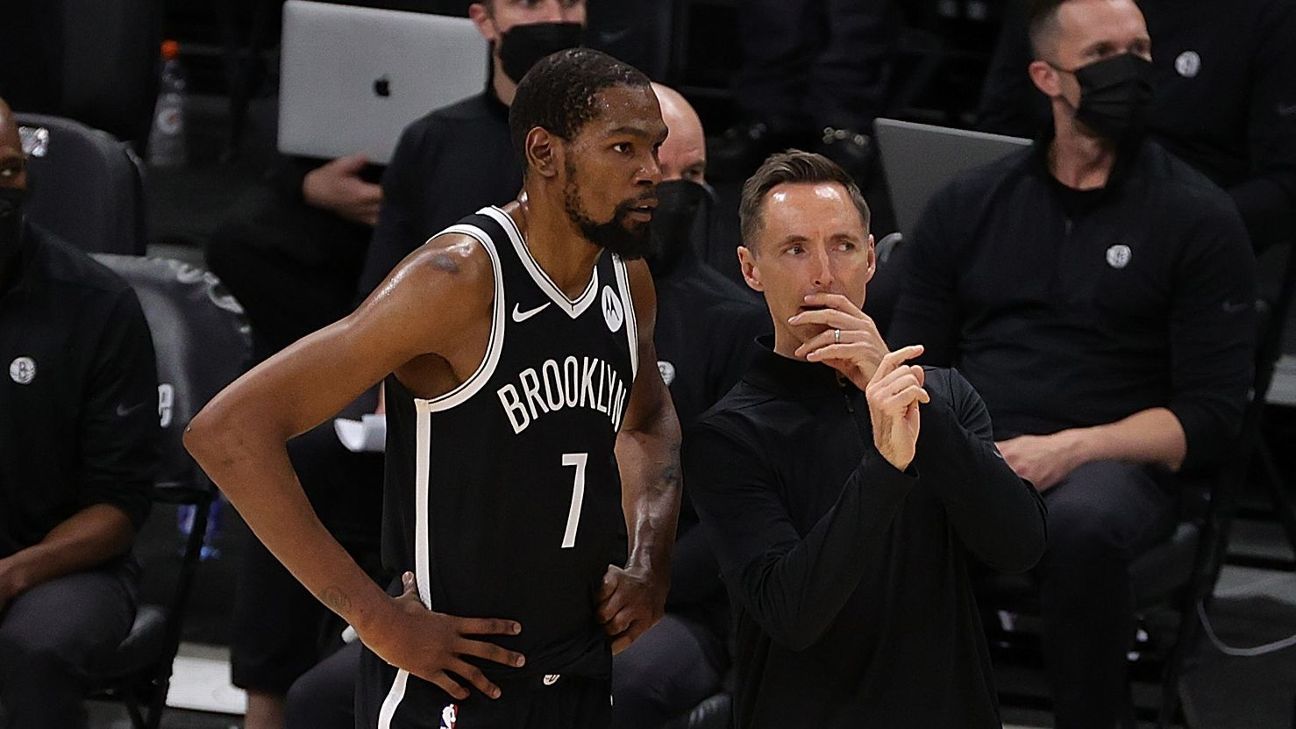 MIAMI — Brooklyn Nets star Kevin Durant has started doing more on-court work as he inches his way back from a sprained left MCL injury, but there still is no firm timetable for his return, coach Steve Nash said Saturday.

For the first time since suffering the injury on Jan. 15, Durant joined the Nets on the road during their current trip to play the Washington Wizards and Miami Heat. Nash said said he’s optimistic about Durant’s progress and that the former MVP is doing a little bit more each day.

“He’s on the court shooting, working through things, looking really good,” Nash said after Saturday’s shootaround. “There’s still a period of time he’s got to go through to get over the line, but really positive.”

At the time of the injury, sources told ESPN’s Adrian Wojnarowski that the Nets were hopeful that Durant would only miss four to six weeks.

“He’s been on the court for a week or so,” Nash said. “Now some of it is starting with spot shots, working his way up to more dynamic movement, but that’s the part of his rehab he’s in and he’s doing great.”

The Nets, who have lost 10 in a row, need all the help they can get after Thursday’s blockbuster deal that sent James Harden and Paul Millsap to the Philadelphia 76ers in exchange for Seth Curry, Andre Drummond and Ben Simmons, who hasn’t played all season after requesting a trade out of Philadelphia. The Nets also got a pair of first-round picks.

Curry and Drummond are with the Nets in Miami awaiting final clearance to play, and Nash said there was still an “outside chance” they could play Saturday. The more likely scenario is that they make their debut Monday against the Sacramento Kings on Monday.

It remains unclear when Simmons will make his debut, but Curry and Drummond believe he’ll be ready for the moment when the time comes.

Added Drummond: “I spoke with Ben [Friday] and the day before. He’s still getting himself ready to play. And whenever he’s ready, we’ll take him back. But until then, we’d rather him get himself prepared.”

As the Nets wait for Simmons’ arrival, Nash is also hopeful that veteran center LaMarcus Aldridge can soon return. Aldridge has not played since spraining his ankle in a Jan. 29 loss to the Golden State Warriors.

“I think he’s days away more than weeks away,” Nash said of Aldridge.

Drummond is confident that once the Nets get back to full strength, they still have the talent to win a championship this season.

“We have a great roster,” Drummond said. “I think when everybody’s healthy and able to play all together, I think we’re very scary down the stretch of the playoffs. Do I think this team is a championship team? Absolutely. What team doesn’t think they’re a team that can be capable of winning a championship? So I think with the group of guys we have here, we’re more than capable of doing it and I don’t see why not.”