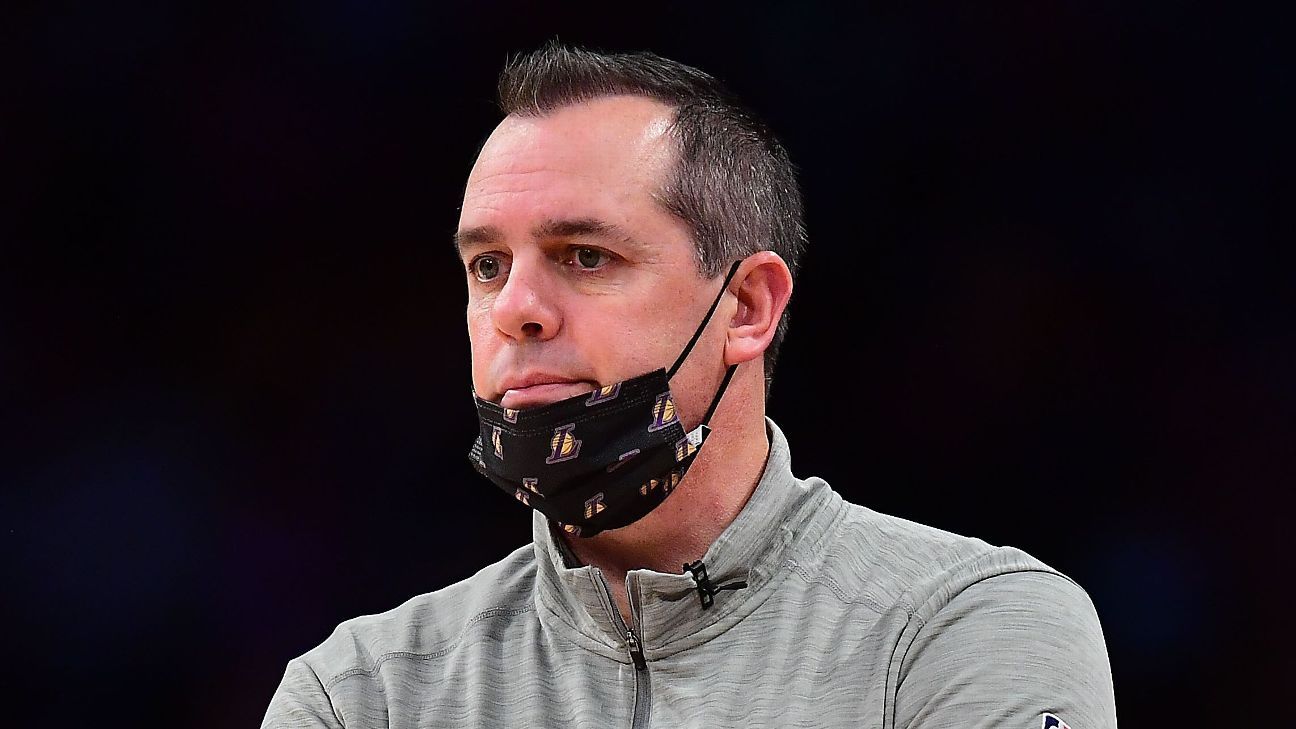 Hoping to turn the page after a week of uneasiness leading up to the trade deadline was met with poor play on the court, the Los Angeles Lakers held a practice in San Francisco on Friday, ahead of their game against the Golden State Warriors.

“It’s a new day,” said Lakers coach Frank Vogel. “I think our group had great energy today. Both in a team film session and in practice. I think there’s just a natural reset energy to our group, knowing that the trade deadline has passed. This is the group that we put together to start the year. This is a group we believe in.”

Vogel, who said after L.A.’s loss to the defending champion Milwaukee Bucks on Tuesday that “our energy as a group isn’t good right now,” said he could feel a change with his group, even though the group wasn’t actually changed. The Lakers were one of eight teams to sit out the deadline without making any moves.

“I think with that deadline passing and having a refreshed mindset today, our group had really good energy about going out and trying to win a game [Saturday] and understanding and believing in what we can do this year,” Vogel said.

As optimistic as Vogel might have sounded about drawing a line in the sand and treating the final 26 games of the regular season as a fresh start, a string of events leading up to Thursday are clearly still being hashed out internally within the organization.

The most pressing of those issues, considering the franchise’s stated goal of competing for championships above all else, is an apparent disconnect between Lakers vice president of basketball operations and general manager Rob Pelinka and L.A.’s leaders, LeBron James and Anthony Davis, on the team’s inaction at the deadline.

“Throughout this process we had different things we looked at and like I’ve done in the past, had conversations with LeBron and Anthony about it and I would say there’s alignment here,” Pelinka told reporters on a video conference call a couple of hours after the deadline passed Thursday. “And that’s all that matters.”

James and Davis did not have any conversation with Pelinka on Thursday in which they gave their approval of L.A. letting the deadline pass without making any deals, a source familiar with the situation told ESPN.

If that wasn’t enough, aspects of the Lakers’ last two losses to the Bucks and Portland Trail Blazers were still being talked about Friday.

Russell Westbrook, who stayed with the team through the deadline despite the Lakers and Houston Rockets engaging in trade talks centered on him and John Wall, at first sounded like he had bought in to the team’s plans when he spoke with reporters Friday.

“I’m looking forward to getting into the [All-Star] break, getting ready to make a splash run and that we’re moving in the direction we need to as a team, collectively, and making sure that we try to put our best foot forward as a collective group,” he said.

However, not more than five minutes later, when asked about the lower back tightness that caused him to sit out Wednesday’s 107-105 loss to Portland — the first game he has missed all season — he said the discomfort was caused by how Vogel managed his substitution patterns in the loss to the Bucks.

“I’m not accustomed to sitting down in long stretches,” he said. “Like, getting up and then, like, moving quickly. Kind of like stiff up a little bit.”

Westbrook was benched by Vogel down the stretch against Milwaukee, the second straight game the coach kept him off the court during crunch time and the third time it’s happened this season.

And on the subject of closing time, Vogel made a public mea culpa for Davis getting zero shots in the fourth quarter — and just 11 overall for the game — in L.A.’s loss to Portland.

“We want him more involved than that,” Vogel said. “Just looking at the game the other night, I did not get the ball in his hands enough in the fourth quarter. That is something I want to own and our group has to own.”

The secret history of NBA players “walking the dog” — and how Ja Morant perfected it
Bol Bol Eurostep slam 👀
NBA Standings: Can anyone in the East catch the Boston Celtics?
NBA Trade Grades: Lakers land Rui Hachimura for next to nothing
‘Band is back together’: Giannis, Middleton return