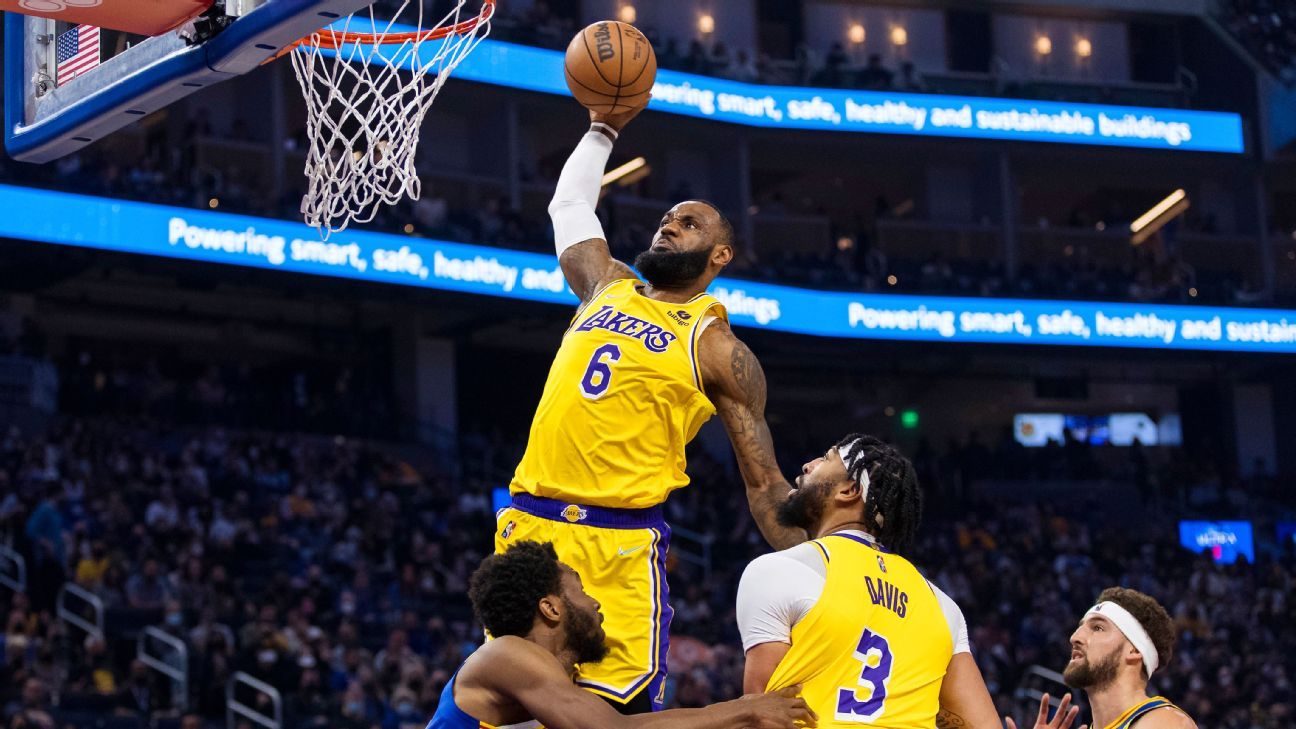 SAN FRANCISCO — No player in league history has scored more points while wearing an NBA uniform than LeBron James.

The Los Angeles Lakers star, who came into Saturday night needing 19 points to pass Kareem Abdul-Jabbar for the most combined regular season and postseason points, made a 3-pointer less than five minutes into the second half against the Golden State Warriors, giving him 21 for the game and 44,152 points between the regular season and postseason. Abdul-Jabbar finished his Hall of Fame career with 44,149 combined points (38,387 in the regular season, 5,762 in the playoffs).

James got it going early, tying Abdul-Jabbar on a 3 with 1:24 remaining in the second quarter. He finished the first half with 18 points on 7-for-12 shooting, helping L.A. keep pace with the Warriors.

“That’s pretty cool. It’s incredible,” said Lakers coach Frank Vogel before the game. “Everything the guy has done throughout his career is just remarkable. It’s why I believe he’s the greatest ever to play.”

Give it up for the new All-Time Leading Regular Season and Playoffs Scorer, LeBron James 👏 pic.twitter.com/zPlGGRhGXs

He passed Michael Jordan for No. 1 on the all-time playoff scoring list in 2017.

“I feel like I witnessed a lot of those postseason points,” said Warriors coach Steve Kerr, whose teams faced off against James and the Cleveland Cavaliers in four consecutive NBA Finals from 2015 to 2018. “That’s a spectacular statistic, maybe not one that is going to be celebrated as if it were the regular season record, but that’s incredible when you think about all the players who have played in this league, the talent. People like Michael Jordan, who played in a million playoff games. It speaks to LeBron’s brilliance but also his longevity.

“I think his most underrated quality is the way he’s been able to take care of his body and continue to play at such a high level for so long. He’s still at the top of his game, at the top of the league. I didn’t know that stat. That’s pretty remarkable.”

The feat comes amid an excellent scoring season for James. Coming into Saturday, he had scored 25 points or more in 21 straight games, which is tied for the longest such streak of his career. His 29.1 points per game would rank second in the league only behind Philadelphia’s Joel Embiid (29.3), however James has not played enough games yet this season to qualify for the scoring title. It is the fourth-highest scoring average of his 19-year career and the most he’s averaged since 2009-10 when he put up 29.7 points for the Cavs.

James’ scoring average this season is by far the most by any player in his 19th season or later. Kobe Bryant held the record, averaging 22.3 points in 2014-15, when he was limited to 35 games because of injury in his 19th season.

“I think he’s just rewritten the rules on how players later in their career can evolve their game to stay playing at the highest level,” Vogel said. “So just another part of his story.”