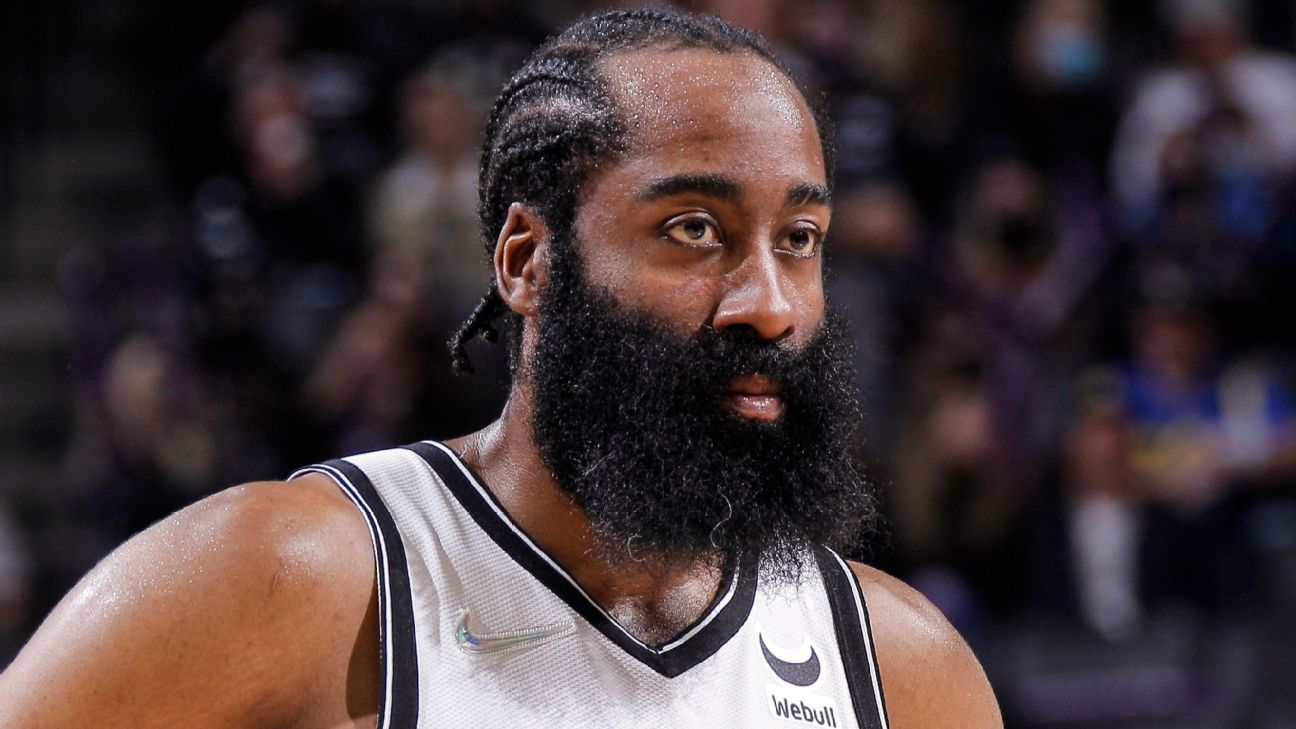 The Philadelphia 76ers announced Monday that superstar guard James Harden will miss the team’s final two games before the All-Star break — Tuesday at home against the Boston Celtics and Thursday in Milwaukee against the defending champion Bucks — as well as the All-Star Game in Cleveland this weekend as he continues to rehab the hamstring strain that kept him out for the final few games of his Brooklyn Nets tenure.

“I think it’s more to make sure he’s right, healthy and ready to go,” 76ers coach Doc Rivers told reporters following Monday’s practice, when asked why the decision was made to sit Harden for the next week.

Harden will officially be introduced Tuesday afternoon ahead of the game against the Celtics. But because he won’t play this week, his first chance to play in a 76ers uniform will now be Feb. 25 in Minnesota against the Timberwolves — and his first possible home game as a 76er will be March 2 against the Knicks on ESPN.

Harden was seen shooting with fellow guard Tyrese Maxey, who Rivers has already said will continue to start in Philadelphia’s backcourt alongside Harden after replacing Ben Simmons as the team’s starting point guard this season. Rivers said Harden went through everything with the team Monday.

“We didn’t do anything live, but he did all the skeleton [drill] work, all the defensive walk-through stuff, all the shooting,” Rivers said. “He did everything everybody else did. Obviously he’s a high-IQ basketball player, so the stuff we do, he does anyway, and the other stuff we threw him out there and he kind of figured it out.”

What is already a compressed schedule to get Harden into the flow of what the 76ers are doing has only been tightened further by his delayed debut. After this week’s games are complete, Philadelphia will have just over six weeks, and exactly 24 games, to get its new lead guard up to speed before the playoffs arrive.

But Rivers downplayed the difficulties of integrating Harden, saying that with a player as talented as Harden is, it’s just a matter of getting out of the way.

“I’m focused on both,” Rivers said, referring to winning this week’s games while planning for Harden’s debut, “but it’s not hard. Listen, putting James Harden into an offense is not that hard. It really isn’t. I mean, he’s just a terrific basketball player, so you don’t need to overcomplicate it. You know where he’s been great at, you know which direction he wants to go, and so you put him on those sides of the floor.

“A couple of the things we run, today our guys automatically flipped it without me saying a word. [A play called] delay four rub, we always run it the opposite way. I didn’t say a word and Tyrese ran it on the opposite side of the floor. They just did it. So that will happen, and when you coach a guy, you find out other things he does that you didn’t know he can do, and that will happen.”

What Rivers did say, however, is something his players had already indicated: that the team’s practice schedule over the next few weeks will be different, and more intense, than if a trade hadn’t been made, in an attempt to get everyone on the same page as quickly as possible.

“The first day after the All-Star break, when we have that one practice, that will be a scrimmage,” he said. “Obviously, one scrimmage is not going to make it. What you do right now, and we did a little bit, the skeleton [drill] was faster today. It had more energy to it, because guys know they are trying to get their timing. Still not the same. You can’t replicate it, but clearly in our skeleton work it will be at a higher pace just to try to get that. But unfortunately, when you make a trade midseason, that timing has to almost come through games. That’s the only way around it.”

It also wasn’t a coincidence that Harden and Maxey were shooting together. The second-year guard has taken significant strides forward this season after being thrust into a huge role within the team thanks to Simmons’ decision to request a trade and stay away from the team. As a result, Maxey went from playing 15 minutes per game last season and making a handful of starts to playing 35 minutes per game this season and starting every single game — all while scoring 17 points a night and shooting just under 40% from 3-point range.

Rivers said he hopes Maxey will pick up some things just from getting the chance to be around a future Hall of Fame guard every day.

“Just stand next to him and hope it rubs off,” Rivers said when asked how he hopes Maxey will begin to learn from Harden. “Really. I love that we’ve gone from our skill development, when I got here everyone was doing individual workouts. Every single guy on every basket, and I was like, ‘I thought this was a team game.’ So we brought it to more two- and three-guy pods on baskets, just to get guys with each other, and clearly our first day we wanted to make sure James and Tyrese are together, because just being together will help Tyrese.

“And James was blown away by Tyrese. Like, again, he had two dunks today and James was like, ‘Oh, my gosh.’ Because you don’t see that, how athletic he is. I thought that surprised James today.”