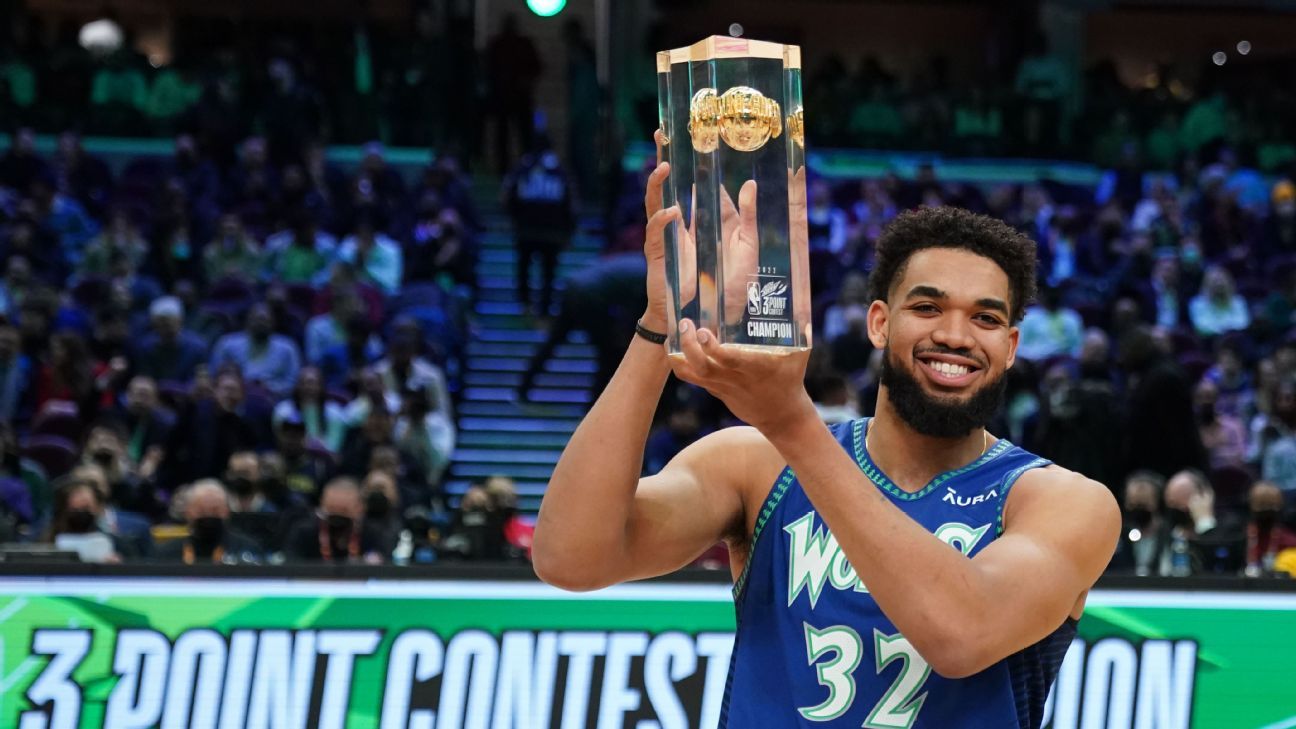 “Who bet against me?” Towns asked with an ear-to-ear grin.

Towns, thanks to a record-setting 29 points in the final round, emerged as the winner of the 2022 3-point contest, edging out Atlanta Hawks guard Trae Young and LA Clippers guard Luke Kennard, who each put up 26. Towns was 13-1 at Caesars Sportsbook, the longest odds in the field.

Towns, who said he lobbied the league for years to participate, barely escaped the opening round of the competition, taking a deep breath before burying his final shot, which turned out to be just enough to advance to the final round.

From there, he took off, although he was mad afterward that he blew a chance to get to at least 30, the number he expected would be needed to win the contest.

“I’m super happy to win,” Towns said. “It’s great, but I just have such high standards for myself. … I’m the biggest critic of myself. There’s no writer, no blogger, no one who could critique and be more harsher on their game than me on my game. So I was so messed up about not getting the 30. … I thought 30 was what I was going to need to win in the final round. I was able to scrape by with 29.”

Towns wore a chain in honor of his late mother, Jacqueline, after the league made an exception to its policy prohibiting jewelry from being worn during the event. Jacqueline Cruz-Towns died due to complications from COVID-19 in April 2020.

In Saturday night’s final round, Towns flew around the arc and set a mark that, ultimately, Kennard and Young couldn’t reach.

Things went according to script for Towns, with his preference being to go first and set a high score for the others to chase.

“I told Luke Kennard I wanted to go first, so I was glad when they called my name and that I was gonna go first,” Towns said. “Just tremendously confident in my shooting ability and wanted to go first. I wanted to keep pressure on everybody, get a high number that makes it feel almost unattainable. Just that feeling of you have to be perfect, and you miss one, it kind of knocks confidence out, so I wanted to set the tone real quick.

“But I just felt good. I just felt really good and really confident all day. The energy that I had all day wasn’t nervousness or anxious, it was super confident, and I can’t wait to show the world what I can do when given this platform and stage.”

Towns, who won the Skills Challenge in 2016, joined Warriors star Stephen Curry as the only players to win two different events in All-Star history. Curry won the 3-point contest (2015, 2021) and Skills Challenge (2011).

As for why it took him so long to get into the 3-point contest, Towns said it simply was a matter of him being a big man. While he said winning the competition was further proof he’s the best-shooting big man of all time, Towns said he also wants to serve as a role model for kids, showing them they can play the way they want to play.

“I think the league knew I could shoot the ball the way I could from 3,” Towns said. “But for all the kids, all the tall kids and all the big men out there who are told they won’t succeed doing nothing but having their back to the basket and shooting hook shots, I want to be the example that is not true, and you can accomplish anything you want and be the player you want to be at any time.

Zach Lowe: OG Anunoby at No. 75 is gonna look SILLY! | NBA Today
Who is Joe Mazzulla? His journey to the NBA and what lies ahead for Boston
Magic’s Fultz out indefinitely with fractured toe
This moment from The Last Dance is iconic 🐐 | #shorts
Luka Doncic’s latest project is the creepiest thing we’ve ever seen