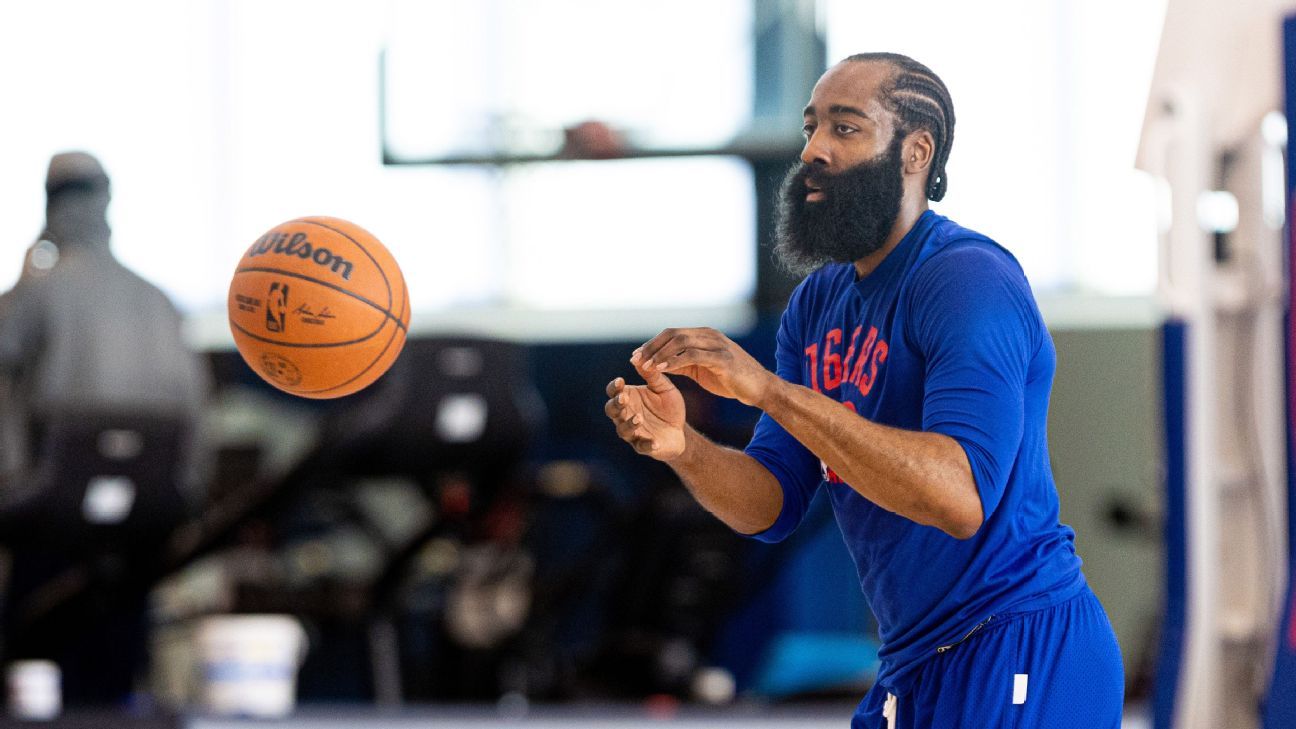 Shortly after James Harden was introduced as the newest member of the Philadelphia 76ers, the superstar guard was asked the question dominating the NBA world after the blockbuster trade deadline swap with the Brooklyn Nets for Ben Simmons:

How will this partnership with Joel Embiid work?

“I think we complement each other,” Harden said early in his news conference on Feb. 15. “Obviously, the whole world knows how great Joel has been playing.”

A few hours later, Embiid was asked the same question.

“As you look at the teams that have won in the past, whether you look at the Golden State [Warriors] teams, even the [Los Angeles] Lakers and Milwaukee [Bucks] last year, they just move the ball,” he said.

“[Harden is] probably up there as far as the best playmakers out of the pick-and-roll, so obviously you got to add that even more to our offense.”

Friday night offers the first glimpse of the Harden-Embiid dynamic, when the 76ers go on the road to face the Minnesota Timberwolves. It will be the first of a 24-game sprint to the regular-season finish for the third-place Eastern Conference 76ers and their new All-Star duo, who must figure things out on the fly in the hopes of delivering Philadelphia (35-23) its first NBA title since 1983.

To get a sense of how Philly’s experiment could play out, we asked scouts, executives and coaches around the league what pressure points they’re watching in Harden’s debut and throughout the rest of 2021-22.

The push and pull between Harden and Embiid

For the partnership to work between the 2018 MVP and the front-runner for this season’s award, it’s going to require both to shift away from the typical styles they’ve enjoyed throughout their careers — being the center of their team’s universes.

“I’ve got to become more of a pick-and-roll player or pick-and-pop just to help my teammates and help him,” Embiid said last week. “[Harden is] more of an off-the-dribble 3-point shooter, but I get doubled a lot. To be able to go against those double teams, you’ve got to be able to fire up 3s off-the-catch.”

Of Harden’s 102 3-pointers this season, just 12 have come off catch-and-shoot situations, according to Second Spectrum tracking of NBA Advanced Stats.

That push and pull will be difficult to balance, and the matter of which star will lead the way — from possession-to-possession, let alone game-to-game — will be closely monitored.

“They’re not adding a role player for a playoff run,” a Western Conference executive said. “They’re adding a guy that’s probably going to be their highest usage player.”

Embiid has been at the center of everything the 76ers have done this season — he currently leads the NBA in usage rate for the second straight season — and is in the middle of arguably the greatest year of his career.

But Embiid has never played with someone as ball-dominant as Harden, and several of those asked about the partnership said Embiid must make the biggest adjustment for one basic reason: He usually won’t start with the ball in his hands.

“The single biggest thing is Joel’s adjustment to his offensive role changing,” an Eastern Conference executive said. “It’s not just gonna be, ‘Go set ball screens,’ because he won’t. But it also won’t be what it was before the break.

“How he reacts will make a major difference. If he can keep it together, I think this could go great.”

The Beard vs. The Process. pic.twitter.com/wHeMsTZvrK

Harden, meanwhile, has proven — including during his two-season, 80-game run with the Nets — that he is not exactly energetic when he doesn’t have the ball in his hands. And, like with Embiid’s adjustment to Harden having the ball in his hands, there was just as much discussion over Harden’s willingness to adapt to play differently off the ball than he has before.

“Who will they play through?” a Western Conference assistant coach said. “James and Joel straight pick-and-roll? Will they just go to Joel in the post? When it was Chris [Paul] and James [with the Houston Rockets], James would just stand there when he doesn’t have the ball.”

This season, Maxey — the second-year guard in Philadelphia — has been a revelation filling in for Simmons as the team’s starting point guard and was viewed as untouchable in trade talks with Brooklyn. But now he is playing alongside Harden.

“It’s definitely an adjustment for Maxey,” the West executive said. “He’s going from playing primarily with Joel and floor spacers to becoming one of them.”

After shooting 30% from 3-point range last season, Maxey is up to 39% this year on 3.6 attempts per game. But he has yet to prove he’s a consistent spot-up shooter — and certainly not to the degree that Seth Curry, a 43.8% career 3-point shooter and the guy Maxey is replacing at shooting guard, has been the past season-and-a-half for Philadelphia. Maxey has shot 38.5% on catch-and-shoot 3s compared to 46% for Curry, according to Second Spectrum.

Shooting was already an issue before trading Curry: Philadelphia is 29th in total made 3-pointers this season.

“They don’t — just like they didn’t have enough last year,” an Eastern Conference scout said, when asked if the 76ers have enough shooting. Maybe if they’re talented enough they’ll overcome it. For the really great teams, when you get the stars, the blueprint is simple: Surround them with shooting.”

Coach Doc Rivers has said Philadelphia needs another guard, and the 76ers have struggled when Maxey isn’t on the court. Over the past 15 games, Maxey’s 8.9 net rating is best on the team.

Now, there should be no reason not to have either Harden or Maxey out there at all times, giving Maxey plenty of chances to play on-ball.

“[Maxey is] a better player than I thought he’d be, and he’s been a nice downhill player for him,” the Eastern Conference executive said. “He should be doing that for the second unit, though there shouldn’t be a second when one of James or Joel isn’t out there.”

Will the 76ers be good enough defensively?

Even for those who wonder if Harden has lost a step over the past year after a series of hamstring injuries, there’s universal agreement he will be a boost to Philadelphia’s offense.

And while Harden isn’t exactly replacing a defensive juggernaut in Curry, there are real questions the 76ers have to answer about how they’re going to guard elite offenses, starting with the league’s top wing scorers.

“Oh, yeah,” Rivers said, after Jaylen Brown and Jayson Tatum combined for 57 points in the Boston Celtics‘ win last week, when asked if slowing down big wing scorers is a problem.

“No doubt. No doubt. We will [do it], but we have to do better than tonight in a lot of areas.”

Rivers has said Maxey will start alongside Harden, but if he decides to go in another direction, there isn’t a clear answer on the roster. Any of the other available options — Matisse Thybulle, Danny Green and Furkan Korkmaz — come with their own flaws.

“Seth is gone, but you have Tyrese, you have Harden, and Harden is at his best when you switch and that’s not [assistant coach and defensive coordinator Dan Burke’s] style, and Joel is generally going to be in the paint,” the West assistant said.

Harden has switched 42% of on-ball screens he’s been involved in this season, more than any NBA team. But Philadelphia has switched 13%, the league’s third-lowest rate.

Friday night, though, the time for discussion will finally be replaced by seeing the first part of this grand experiment. Then, it will be up to Harden, Embiid and the 76ers to find a way to make it work in time for the postseason.

“We got to get on the floor together and try to build chemistry,” Embiid said after Sunday’s All-Star Game, looking ahead to the stretch run. “I think it’s going to be easy to build that chemistry.

“Everybody is on the same page. We all are trying to win a championship, so that’s the goal.”