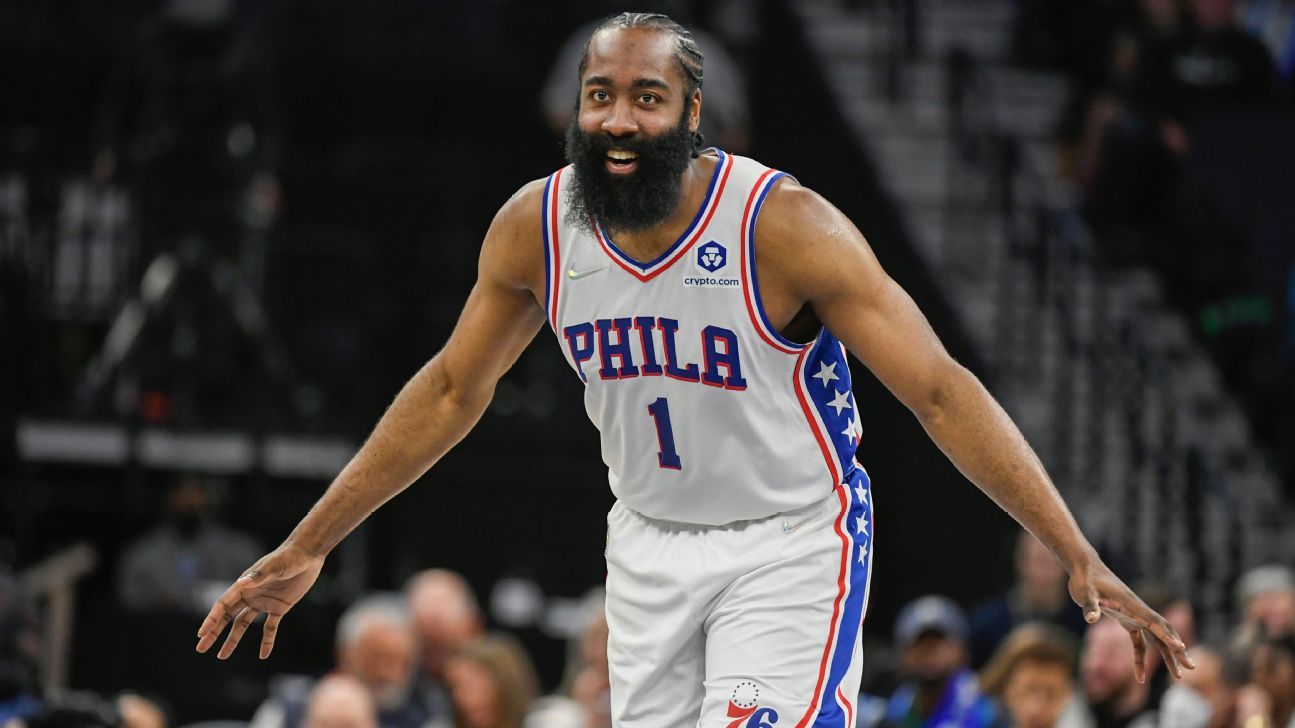 The final verdict on the Philadelphia 76ers trade for James Harden won’t come for months — maybe even years.

Until then, every moment Harden and Philadelphia’s MVP-frontrunner Joel Embiid spend on the court together will be something of a Rohrsarch test. Some will see chemistry, others calamity — sometimes both will be visible in the same game.

There was plenty to glean from Harden’s debut for the Sixers Friday night in a 133-102 blowout win over the Minnesota Timberwolves. But the enduring image from this night, the one that jumps out from behind The Beard, was the bright smile on Harden’s face.

He did not elaborate, but he didn’t have to. His play — and his smile after finding Tyrese Maxey for his 12th and final assist of the night — said it all.

Throughout his NBA career, Harden has rarely made headlines for anything he’s said in interviews. But that doesn’t mean he’s not expressive. When he’s happy, you can see it. When he’s unhappy, as he so clearly was during the final months of his tenure in Brooklyn, he plays basketball like he’s sitting through an 8-year-old’s piano recital.

Since his trade to Philadelphia on February 10, Harden has seemed rejuvenated, the weight of whatever was making him so miserable in Brooklyn finally off of him.

There was the photo of him in practice looking to the heavens, hands thrown up to the sky as if someone was yelling, “Hallelujah!”

There have been scenes of Harden yelling “layup” in practice every time Embiid shoots one of his signature fadeaway jumpers — as in, it’s automatic — and Embiid practicing Harden’s signature step-back 3-pointers.

Then there’s Philadelphia, which is gobbling up Harden merchandise and Sixers tickets at an astonishing clip. Since the trade, Harden’s No. 1 jersey has been the top-selling jersey in the NBA across the Fanatics network.

Friday night it was OK to feel all of that joy because Harden really was that good. Philadelphia outscored the Timberwolves by 35 when Harden was on the court. THIRTY-FIVE — Harden’s best plus-minus since Nov. 30, 2019, when he was still a member of the Houston Rockets, per ESPN Stats & Information.

For Sixers president of basketball operations Daryl Morey, who was also the Rockets general manager when Harden grew into an MVP, it was as good of a start as he could’ve hoped for after reuniting with Harden last month.

“I try not to get too high or too low, but that was a good one,” Morey told ESPN after the game.

Morey knows his reputation is on the line with this trade. He’ll either bring the Sixers their first NBA title since 1983, or it’ll turn him into Captain Ahab. He is a risk-taker by nature, but Harden has never seemed like a risk to him.

“James is a basketball genius,” Morey said. “And he’s been wanting to play with Joel for a long time. I think he’s always thought Joel was, like, the perfect guy to pair with him.”

So Morey is trusting in that, and the trust Sixers owner Josh Harris gave him to make this trade.

Friday night Harden paid off that trust — and then some. He finished with an efficient 27 points, 12 assists and eight rebounds, hitting 7-of-12 from the floor and 5-of-7 from behind the arc. According to Second Spectrum, the Sixers averaged 1.58 points off of Harden’s touches — the second-best mark of any Harden team in a game in which he had at least 20 touches in the last eight seasons.

“I think it’s like anyone with a new group,” Morey said. “You realize you’re the new guy. You want to fit in and then show what you can do. Everyone has watched James play for many years and knows what he’s capable of.

“When you’re getting to know new teammates, I think those early interactions help. Early play on the court really helps.”

Judging by the smile on his face after Friday’s win, Embiid is rather happy with the fit so far, too.

“That was probably the most wide-open I’ve ever been in my career,” Embiid joked.

Five of Harden’s 12 assists went to Embiid, who finished with 34 points, 10 rebounds and nine assists of his own as he continues to mount his MVP case.

There’s still a long way to go before a final judgment will be made about the landscaping-shifting trade, and the fit of Harden and Embiid.

But starts matter. And so do smiles.