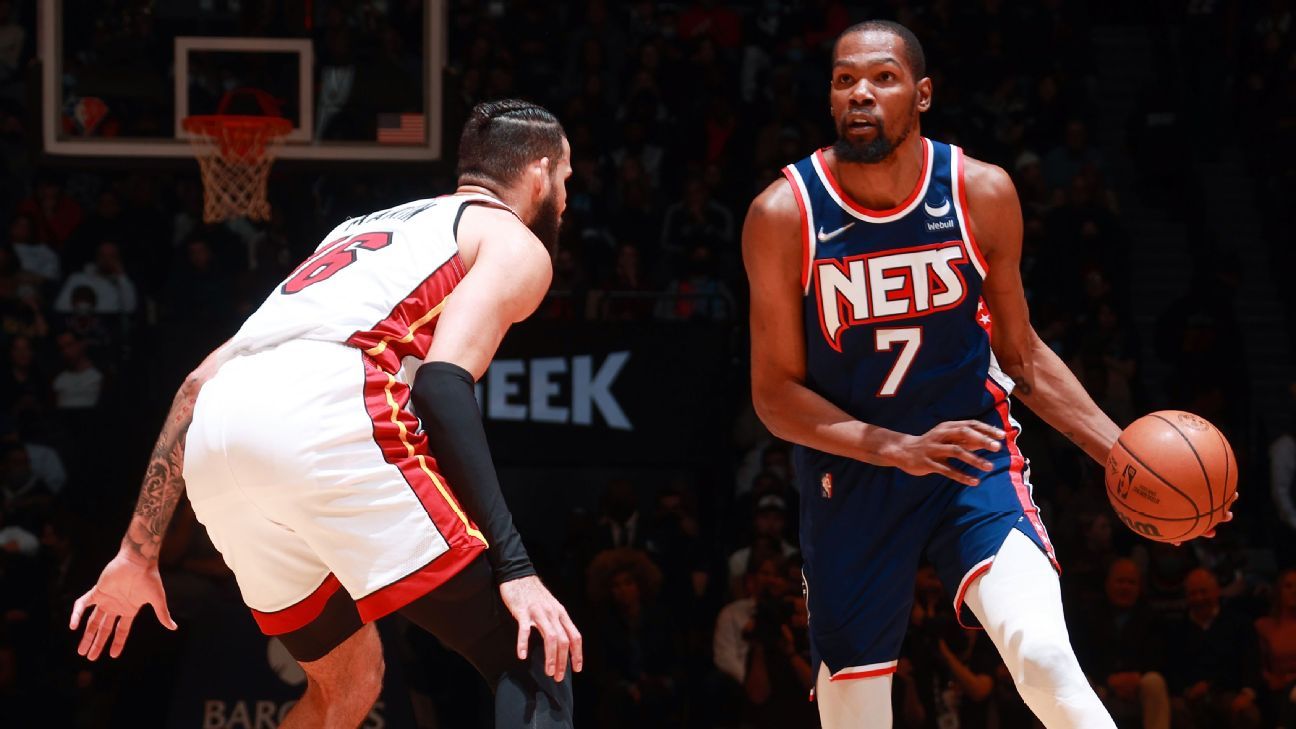 NEW YORK — Brooklyn Nets star forward Kevin Durant spent part of his morning brushing off the notion that he wasn’t going to be a “savior” for his struggling team, then he almost did just that in a 113-107 loss to the Miami Heat on Thursday night.

After missing a month and a half because of a sprained MCL in his left knee, Durant looked like he hadn’t missed a beat while scoring 31 points, dishing out four assists and grabbed four rebounds in 35 minutes. It was the All-Star’s first game since he sprained the MCL in his left knee on Jan. 15.

After missing his first two shots of the game, Durant found a rhythm quickly, transforming the Nets offense in the process — but it wasn’t enough for a struggling Nets team that blew a 16-point lead, dropped its third straight game and is now 32-32 on the year.

“I don’t look at myself as that, as a savior,” Durant said before the game. “But I know what I can do and how much I can help this team and what we’re missing as a group, but I’m not trying to go out there and win a game by myself tonight or make it all about me. I just try to go out there and help and be a good teammate and do what I do. I know what I bring to the table and try to do it to the best of my abilities.”

Durant’s words proved to be prescient for a group that hasn’t been able to find its footing for over two months. The Nets were 5-18 in his absence — and even with his offensive brilliance on full display, they let an undermanned Heat team, playing without Jimmy Butler, Kyle Lowry and P.J. Tucker, overpower them in the second half with a combination of smart plays and hustle. Miami big man Bam Adebayo finished with 30 points 11 rebounds and six assists as a large group of Heat fans made its presence felt throughout the night at Barclays Center.

While Durant’s game showed some understandable rust after being out for a month and a half, his presence gave the Nets the kind of emotional lift at the start that they’ve been seeking since his injury. Durant finished 10-for-21 from the field with three turnovers, including a 3-pointer that rimmed out down the stretch that would have given the Nets the lead. Durant’s teammates and coaches all know how dominant he can be and they expected exactly the type of performance that he gave them in his return. The Nets are now 24-13 when Durant plays this season.

“We know what the standings are,” Durant said before the game. “We know everybody’s telling us every day how far we’re dropping and where we may end up, constantly telling us the situation we’re in. But we understand that and know that each day is important so we’re focused on tonight and just keep plugging away.”

The Nets remain in eighth place in the Eastern Conference playoff race, two games ahead of the Charlotte Hornets in the loss column. The Nets next game is Sunday afternoon on the road against the Boston Celtics.

Dubs dig in as Steph tossed for mouthpiece throw
AD: Lakers ‘cheated’ by late missed call vs. C’s
The Whiteboard: James Wiseman is saying exactly what Warriors’ fans want to hear
What’s at stake for the Rockets in Game 7 vs. the Thunder? | Get Up
Agent: Turner, Pacers reach 2-yr., $60M extension