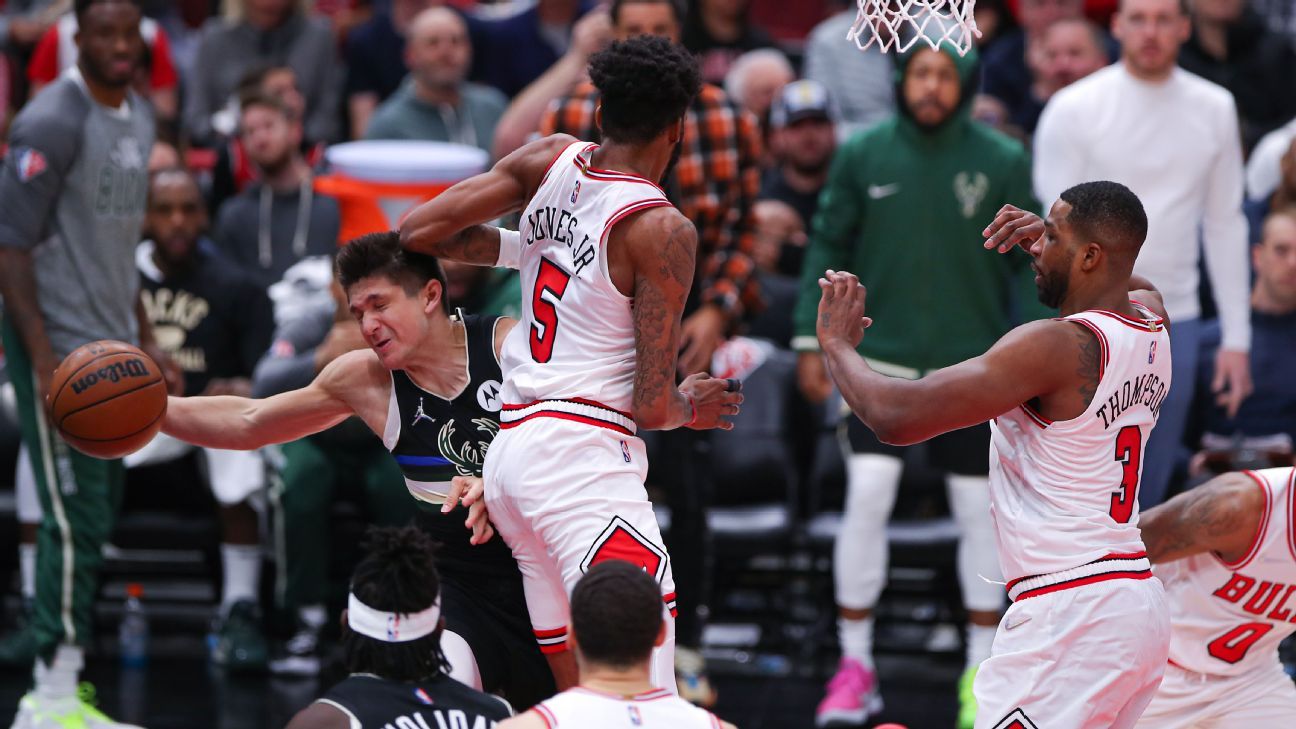 CHICAGO — Fans at United Center may have reveled in Bulls forward Derrick Jones Jr.’s flagrant foul on Milwaukee Bucks guard Grayson Allen on Friday night, but Jones insisted afterward that the foul was not intentional and denied being a dirty player.

Jones was given a flagrant foul 1 in the fourth quarter after delivering a hip check while trying to defend Allen on a drive to the basket and hitting Allen in the face with his elbow.

Jones said he was simply trying to “get a stop.”

“That’s all that goes through my head,” Jones said after the game. “I’m not a dirty player. Honestly, I talked to every ref that was there today. I didn’t think that was a flagrant. They said I hit him in his head. I didn’t even feel it. I just felt him bump my hip and fall. That’s all I felt.”

Allen had been the object of ire for Chicago fans all evening and was serenaded by boos from the sold-out crowd of 21,259 every time he touched the ball.

On Jan. 21, the last time the Bulls and Bucks matched up against each other, Allen committed a flagrant foul 2 on Bulls guard Alex Caruso, which resulted in Caruso suffering a fractured right wrist. Caruso has not played since.

It was the first time Allen had been called for a flagrant foul this season, and only the second time in his NBA career. Yet, he was suspended by the NBA for one game for the foul, which prompted the Bucks to release a statement defending Allen and disagreeing with the suspension.

On Thursday night, Bulls coach Billy Donovan insisted his team had left Allen’s flagrant foul in the past, telling reporters, “We’re not getting back what happened.”

However, Bulls center Tristan Thompson, who was a member of the Sacramento Kings when the incident occurred, said the Bulls were prepared to play “chippy” in Friday’s rematch.

“Take one of my dogs out like that, we’re gonna have issues,” Thompson told reporters Thursday in Atlanta. “You gotta set the tone. That’s what Bulls basketball is all about, setting the tone. What he did affected one of our guys, and I don’t think anyone should forget about that.

“I think guys have [it] in the back of their head, and if guys want to play chippy, let’s play chippy.”

Bucks coach Mike Budenholzer didn’t offer much reaction when asked about Thompson’s remarks before Friday’s game, saying he had not seen them.

“I have no idea what you’re talking about,” he said. “Didn’t register with me. Nobody said anything to me.”

Aside from the reaction from the crowd, Friday’s game went along mostly without incident. Allen was jeered for 31 minutes and finished 2-of-6 from the field for seven points and four rebounds in Milwaukee’s 118-112 win. None of the Bucks players took issue afterward with Jones’ hard foul on Allen.

Jones maintained that he did not try to exact revenge for the play in January.

“That’s not who I am. If I get a foul in the process of trying to get a stop, then so be it. But I ain’t [gonna] blatantly take that man out. He got a family to take care of. Why would I do that?”

NBA Standings: Can anyone in the East catch the Boston Celtics?
Best NBA prop bets today (Expect big game for Joe Harris)
The secret history of NBA players “walking the dog” — and how Ja Morant perfected it
Tim Legler breaks down how the Raptors beat the Bucks in the ECF | 2019 NBA Playoffs
NBA Trade Rumors: Why a Fred VanVleet trade is becoming more and more likely