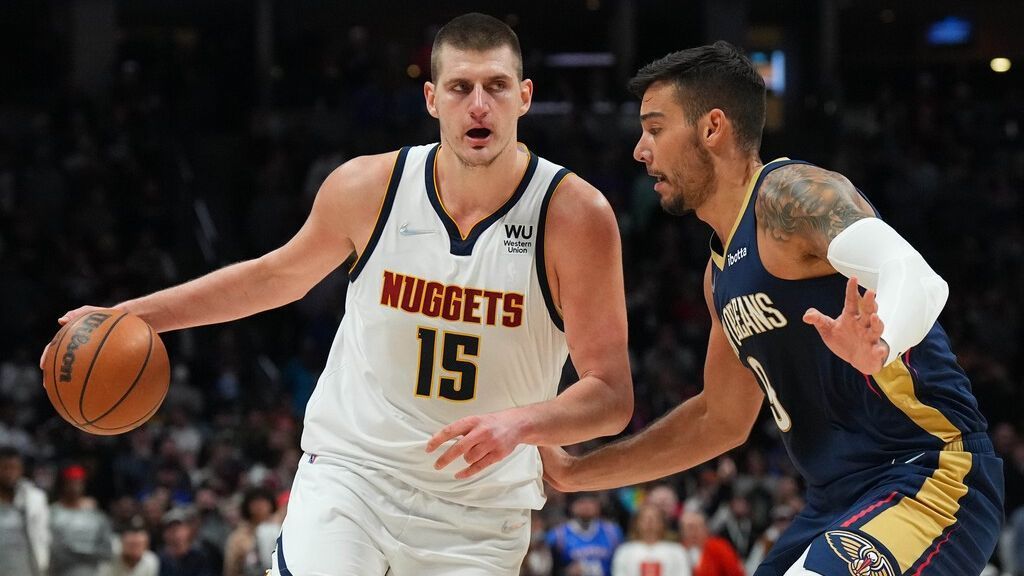 As Nikola Jokic sat at the podium for his postgame news conference, his Denver Nuggets teammate Bones Hyland briefly popped in the room to let his thoughts be known.

The comments came after the reigning MVP put up an excellent case for why he should get another in the Nuggets’ 138-130 win over the New Orleans Pelicans.

Jokic finished with 46 points, 12 rebounds, 11 assists, 4 blocks and 3 steals — numbers no other player has reached in a single game in NBA history since blocks and steals started being tracked in 1973-74. In the fourth quarter and overtime alone, Jokic had 30 points on 10-of-11 shooting.

According to ESPN Stats and Information research, Jokic is the first player in the last 25 seasons to have 30 points or more in the fourth quarter and overtime while also shooting 90% from the field. The last player to shoot that efficiently while putting up that many points in the fourth and overtime? Kobe Bryant who had 33 on 84.6% shooting against the Portland Trail Blazers on March 16, 2007.

Jokic also joined Wilt Chamberlain as the only players in NBA history with a 45-point triple-double on 70% or better shooting.

“Phenomenal. Different. He’s just different,” Nuggets forward Aaron Gordon said of Jokic’s performance. “That’s just not something that you see often. He took over, 30 points in the fourth quarter and overtime, that’s just sick. That was just an amazing game. He’s an amazing ballplayer.”

This was the second time the Nuggets and Pelicans went to overtime this season, and it was the second time Jokic dominated the game down the stretch to lift Denver to a victory. He scored 11 consecutive points in overtime on Dec. 8 and finished with 39 points, 11 assists and 11 rebounds.

“What a luxury to have the MVP in an overtime game knowing you can just play through him,” Malone said. “They double-teamed him, Monte Morris makes a big 3. It’s just such a confidence that you have because you know in a close game he’s just going to make the play again and again. For him to step up the way he did just speaks to his greatness.”

Malone didn’t get to see Jokic’s late game spectacular, however. He was ejected after arguing a traveling call against Gordon with 1:06 left in the third quarter.

The Pelicans, who trailed by 21 in the first half, stormed back and took a 10-point lead heading into the fourth quarter. That’s when Jokic took over.

“My teammates were looking for me. I was making shots and being aggressive. Just a really good period,” Jokic said.

Jokic scored 15 of the final 17 points in regulation for Denver, helping the Nuggets go on a 17-6 run in the final 3:08 to send the game to the extra period. After the Pelicans took a 130-126 lead in overtime, the Nuggets scored the next 10 points — including back-to-back possessions where Jokic drilled a deep 3-pointer as the shot clock was winding down and then a 17-foot jumper in the lane with 28.3 left to put the game away.

Jokic missed the previous Nuggets’ game with a non-COVID illness and he said after the win that he didn’t eat for nearly a day and a half.

“I just felt a little bit off. I just had something, I felt like I needed to throw up. It was just a weird feeling,” Jokic said. “I felt weak. I felt not ready. I didn’t want to go out there and just cheat and not perform at that level. If I can’t give 100 percent, if I’m 80 percent I’m not going to go out there.”

Jokic said he struggled at times in the first half trying to get back into the flow of the game, but it was evident he figured it out by the fourth quarter.

“This dude is incredible,” Gordon said. “I don’t say that about a lot of people. I only say that about a handful of people. This dude is incredible. He’s the MVP. I believe that. He’s coming out night in and night out putting up ridiculous numbers and we’re winning. I don’t know everybody that votes on it but this guy gotta be at the top of the list.”