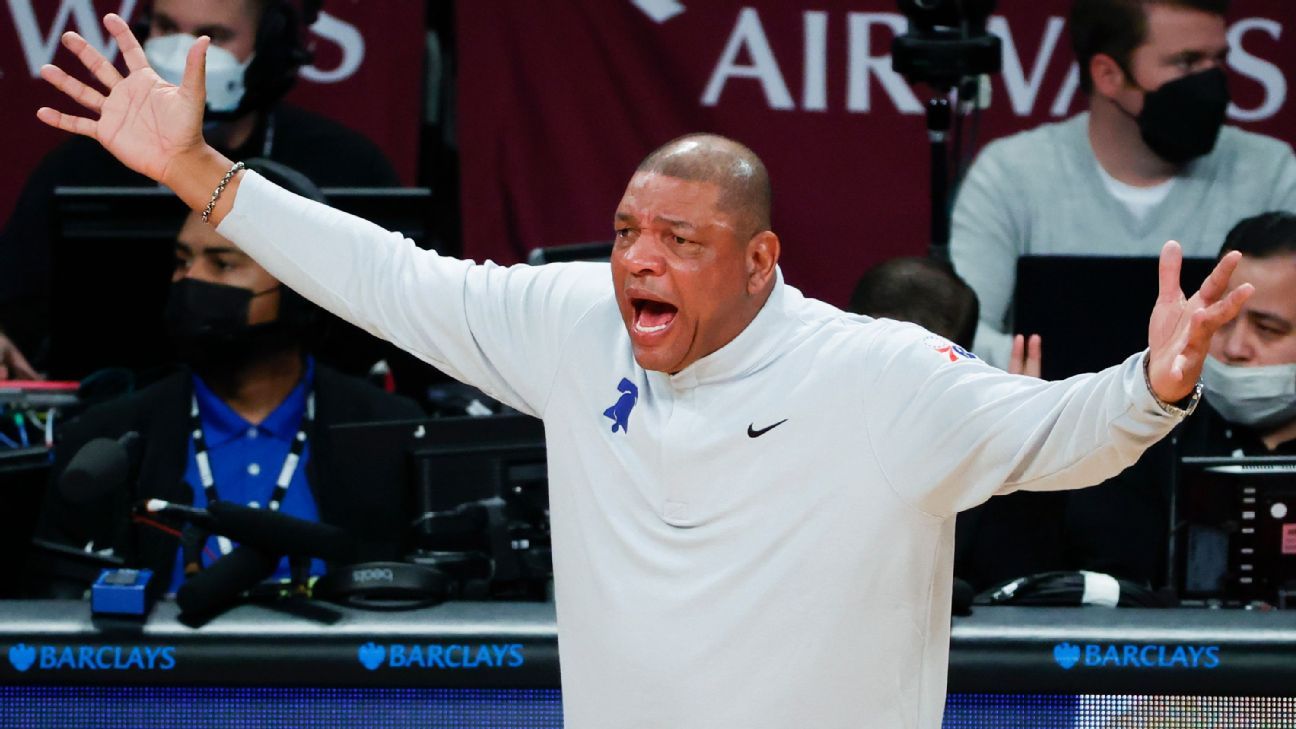 CAMDEN, N.J. — Even with Ben Simmons not playing in Thursday night’s game between the Brooklyn Nets and Philadelphia 76ers, there is plenty of excitement in Philadelphia.

Sixers coach Doc Rivers said after practice Wednesday that while he isn’t a fan of the way this Atlantic Division rivalry began, he is a fan of rivalries in general — and he thinks the NBA is in great shape with the wide open and competitive the Eastern Conference.

“I don’t like how, let’s say, this rivalry was started,” Rivers said with a smile. “I’ll pass on all that, let me put it that way. But I love when there’s rivalries. I love when there’s teams that are in the same conference that want to play each other and go after each other. That’s all good.

“The league is in a great place right now. It really is. I mean, you look at the East, there’s five, six teams that legitimately can win the East. In the West, the same thing. So if you’re over at the league, if you’re Adam Silver right now, you’re loving the league, you really are. Because competition is good, right? That’s what we want. We want a good, hard game, with competition. And that’s a great thing, and I think we have it in our league right now.”

Two of those teams Rivers was referring to — his own, and the Nets — will square off Thursday in the first meeting between the teams since their blockbuster trade last month that saw Simmons and James Harden get swapped before the NBA trade deadline.

The game will be the stiffest test that Harden and Joel Embiid have faced since they began playing games together two weeks ago. Philadelphia has gone 5-0 in games both superstars have played in, but none have come against opponents the caliber of Kevin Durant and Kyrie Irving, two elite scorers.

Rivers cautioned against reading too much into an individual game, saying five games is too short a time to make sweeping judgments.

“Kevin Durant is elite,” Rivers said. “Kyrie is elite. When you give them the ball, they’re really tough to guard. There’s no secrets to that. We’ve got some elite guys here, too, and there’s probably no secrets to that. Both teams are probably still trying to figure out stuff. They’ve had guys in and out all year. Us, too, with the trade.

What won’t be learned is how Simmons will look with his new teammates, or how he’ll play against his old ones, as he remains sidelined with a back issue.

But that hasn’t stopped Philadelphia from being fired up — and hasn’t stopped his old teammates from admitting the contest means more than the typical regular-season affair.

“Absolutely,” Sixers forward Georges Niang said when asked if it means more than a normal game. “I mean, obviously we’re not gonna hide and say what didn’t happen. There was a trade that happened, we got James, they got Ben.