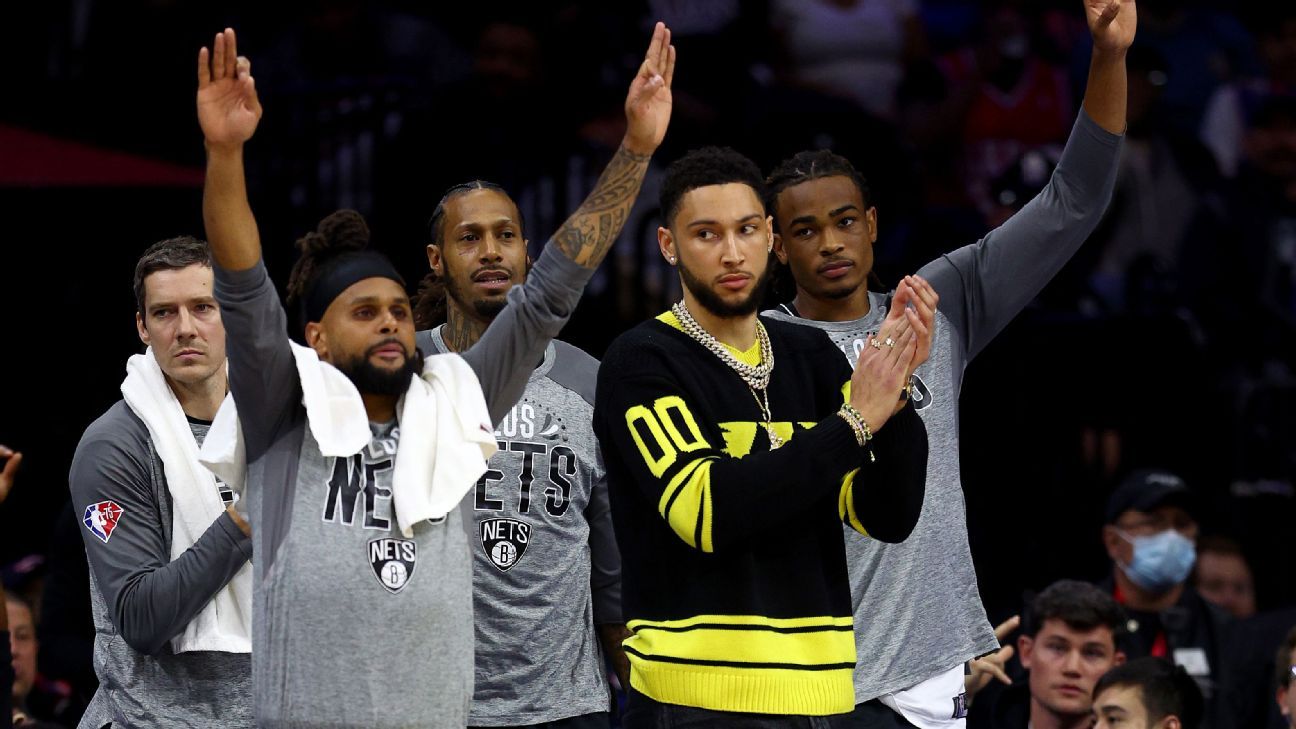 PHILADELPHIA — Ben Simmons endured all the boos that came his way during an emotionally charged return to Philly — and his new Brooklyn Nets teammates made sure they got the last laugh with a dominant 129-100 win over the 76ers on Thursday night.

Making his first appearance in Philadelphia since requesting a trade over the summer, Simmons was showered with boos from a fan base that had waited over nine months to express its frustration to him following his rough performance during an unexpected playoff exit at the hands of the Atlanta Hawks last May in the Eastern Conference semifinals.

The jeers rained down on Simmons from the moment he set foot on the floor during pregame warm-ups. The former All-Star spent about 20 minutes helping warm up Patty Mills, rebounding and passing to the veteran guard.

The only time Sixers fans cheered with Simmons on the floor was when he threw down a dunk in the midst of warming up Mills. Simmons passed up a dunk in Game 7 against the Hawks that was replayed throughout the summer and seen as a major breaking point in his relationship with the Sixers and their fan base.

Simmons, who was sent to Brooklyn along with Seth Curry, Andre Drummond and two future first-round picks in exchange for James Harden and Paul Millsap at last month’s trade deadline, walked back on the floor as the Sixers were being introduced just before the game. Once the introductions were complete and the lights in the building came back on, fans started to realize Simmons was on the Nets’ bench and they booed loudly once more.

All the hoopla that surrounded the game appeared to focus the Nets from the start. Kevin Durant, Kyrie Irving and Curry were locked in from the beginning, combining for 49 of Brooklyn’s 71 first-half points. For a team that came into the game having lost 17 of its previous 21, the win served as a reminder of just how dangerous the Nets still feel they can be if they are healthy and whole. This was the team’s most complete, and most important, victory of the season to date.

Simmons, who nodded several times on the bench while listening to “F— Ben Simmons!” chants from the crowd, sat next to Mills for much of the night while cheering on his teammates. There was an extra security presence around the Nets’ bench, with one extra guard stationed halfway up each section to make sure fans closer to Simmons didn’t get unruly.

Fans remained mostly quiet in the second half as the Sixers continued getting blown out, but they saved an extra round of boos for Simmons when he picked up a ball that had gone out of bounds with just over eight minutes left. Fans yelled one more time while many on the Nets’ bench smiled and offered Simmons high-fives at the end of the team’s most joyous night in two months. The night closed with Nets fans showering Simmons with a celebratory “Ben Simmons!” near the team’s bench as his teammates smiled and clapped

While it remains unclear when Simmons will be able to make his season debut as he continues to deal with a back issue, the Nets are hopeful he will be able to take part in some of Saturday’s practice as a first real step toward getting back on the floor. The organization also remains hopeful that New York City Mayor Eric Adams will decide to pull back the city’s vaccination mandate and that Irving, who is not vaccinated against COVID-19, will be able to play in home games and be a full-time player again.

Both Durant, who finished with a team-high 25 points 14 rebounds and seven assists, and Irving, who finished with 22 points, five assists and four rebounds, also got a small measure of revenge against Harden, after the All-Star guard decided he didn’t want to be part of the Nets anymore. The duo dominated the offensive tempo all night and limited Harden to a 3-for-17 performance, including going 0-for-10 on two-point field goals.

The win provided another reason why so many in the organization are still confident their championship dreams can be reached this season. Durant and Irving are playing at a very high level, and the Nets believe Simmons can quickly return to his old form. He cleared an important part of his journey simply by sitting on the bench Thursday night.

Myles Turner extension with Pacers takes major trade chip off the table
NBA schedule today, game time, players to watch (Monday, Jan. 23)
Lakers vs. Celtics player prop bets for Saturday, January 28 (Lebron vs. Boston)
What’s at stake for the Rockets in Game 7 vs. the Thunder? | Get Up
Kelly Olynyk was FIRED up for free chicken after the Clippers missed both free throws 😂