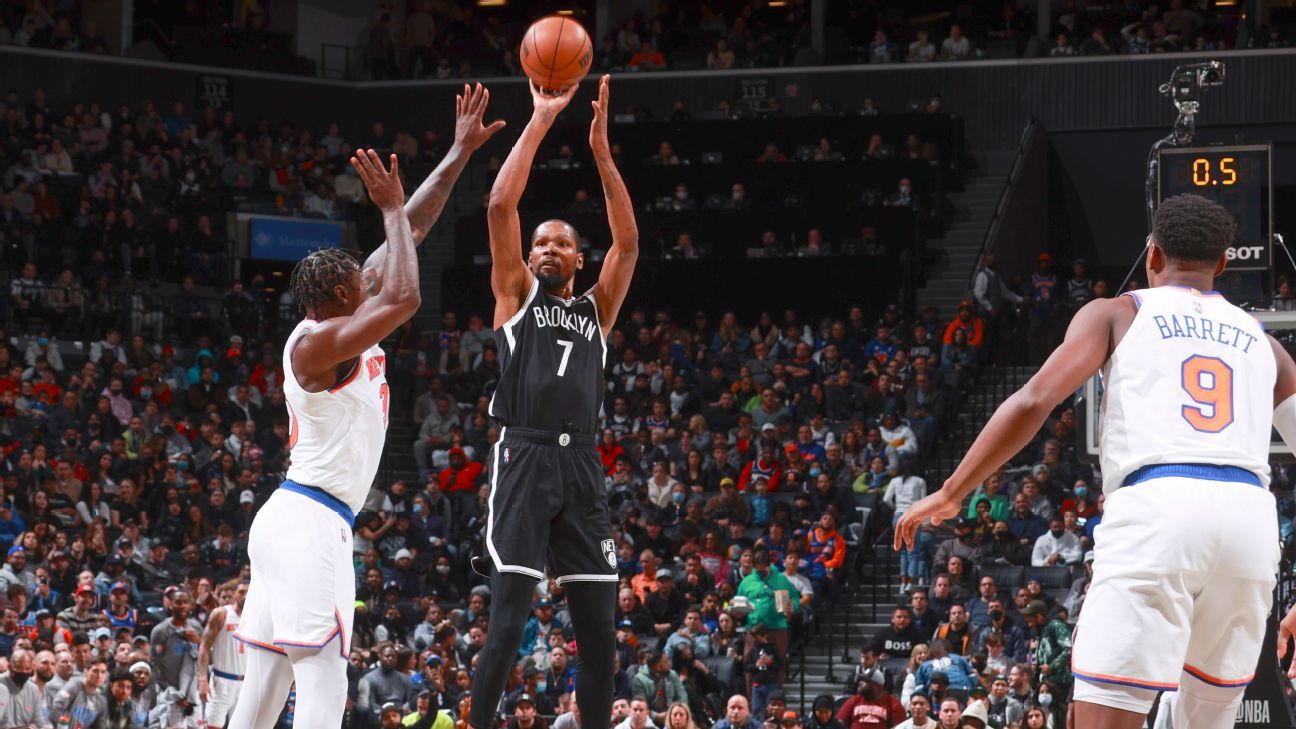 NEW YORK — Brooklyn Nets star forward Kevin Durant has been so dominant for so long that he admits he feels “at ease” on the floor.

It certainly didn’t look difficult in Sunday’s 110-107 win over the New York Knicks as Durant dropped 53 points, dished out 9 assists and grabbed 6 rebounds while carrying the Nets to their third straight victory.

“You feel kind of at ease knowing that you can affect so many different plays and different areas of the game with my skill set,” Durant said. “I can affect my teammates and how they approach the game with my skill set about the big picture and seeing — I know I work on my game and I got to this point as an individual player, but I’m at a point in my career it’s like ‘All right, how can I impact everybody out here? How can I make the other coaches think about their game plan.’

“So I feel like I up the level of everybody out on the floor and that’s a good feeling to have.”

Durant’s brilliant performance offered another reminder as to why the Nets, now 35-33, still have championship aspirations this season despite the fact that Kyrie Irving‘s status remains in question because of New York City’s vaccination mandate and it remains unclear when Ben Simmons will make his season debut because of ongoing back issues.

Irving was a hot topic during and after Sunday’s game. For the first time all season, the star point guard was able to enter Barclays Center — but only as a fan. With about four minutes left in the first half, Irving, along with a small group of friends and family, walked out of the visiting team’s tunnel and made his way to a courtside seat.

Irving received some cheers on his way to his seat, while a few fans started chanting his name and “Free Kyrie!” It was an odd scene in a season full of different moments for a Nets team that remains hopeful that New York City mayor Eric Adams will pull back the city’s mandate so that Irving can play full-time again. Durant called out Adams several times by name while discussing the situation after the game.

“It’s ridiculous,” Durant said. “I don’t understand it at all. There’s a few people in our arena that’s unvaxxed, right? They lifted all of that in our arena, right? So I don’t get it … I don’t get it. It just feels like at this point now, somebody’s trying to make a statement or a point to flex their authority. But everybody out here is looking for attention and that’s what I feel like the mayor wants right now, is some attention. But he’ll figure it out soon, he better.

“But it just didn’t make any sense. There’s unvaxxed people in this building already. We got a guy who can come in the building, I guess, are they fearing our safety? I don’t get it. We’re all confused. Pretty much everybody in the world is confused at this point. Early on in the season people didn’t understand what was going on, but now it just looks stupid. So hopefully, Eric, you got to figure this out.”

Irving was shown on the video board during the game and received some light applause and pointed at his heart to say that he appreciated the gesture. Nash said that Irving joined the Nets in the locker room at halftime and listened as they got ready for the second half. Nash said he didn’t understand the city rules enough to explain why Irving could be on the floor and in the locker room, but couldn’t sit on the bench with his teammates.

“It doesn’t really affect us,” Nash said of coaching while Irving sits in a courtside seat. “We’re used to stuff like that. We just tried to stay focused and win the game and we know there’s the oddities to everything but we’re locked in on the task at hand.”

Irving waited at the far end of the floor to give Durant a hug after Durant finished a postgame interview with ESPN’s Malika Andrews. The pair hugged and made their way off the floor — and then Durant launched into Adams during his postgame remarks.

“I was at the free throw line I think when he walked in, and me and Drum looked at each other and was like, ‘Yo, this is unreal.'” Durant said. “I’ve never seen nothing like this before. We just smiled. We could say that about a lot of situations over these last two or three years when things just didn’t make any sense, especially with COVID being involved. So hopefully it gets figured out.

“Eric, you got to figure something out, man, because it’s looking crazy. Especially on national TV, and he can come to the game, but not play, come on, man. Hey yo, Eric.”