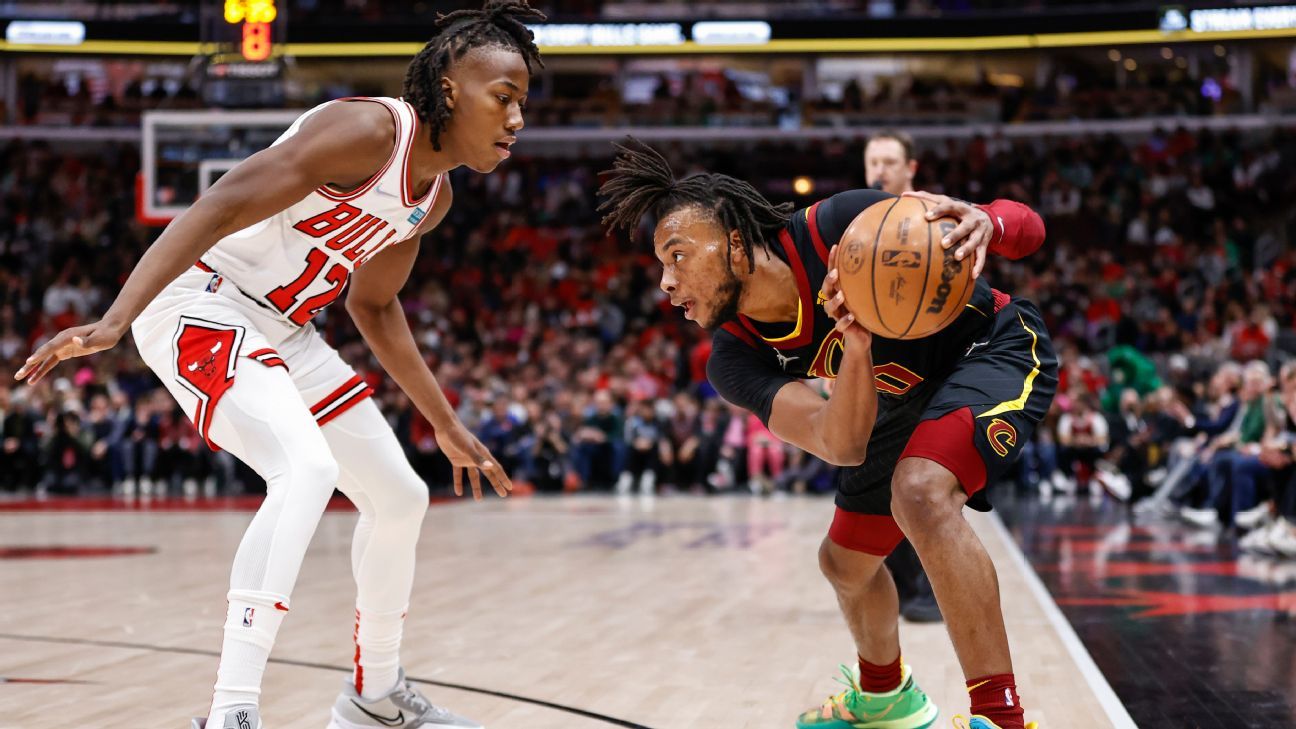 LESS THAN A minute has ticked off the clock at the United Center, with the Bulls hosting the Cleveland Cavaliers, when a microcosm of Chicago’s most surprising success story this season reveals itself — again.

Cavs guard Darius Garland walks the ball up the left side of the court. He dribbles between his legs and jets to his right.

Waiting for him is Ayo Dosunmu. The 22-year-old Bulls rookie sticks to Garland’s left hip. He dodges a screen from Kevin Love, then sheds a second one from presumed Rookie of the Year Evan Mobley. As he recovers, Dosunmu stretches his 6-foot-8 wingspan toward Garland and attaches himself, once again, to the Cavaliers’ best player.

Still, the 2022 All-Star senses daylight and accelerates toward the rim. But from behind, Dosunmu soars, swatting the ball out of bounds with his left hand.

It was Garland’s first shot of the game. He’d attempt eight more with Dosunmu as his closest defender, per Second Spectrum tracking, and make only one of them. The Bulls won 101-91.

Of course, none of this — starting the 2021 second-round pick, and having him guard the opposing team’s best player — was Chicago’s plan.

“Anybody that would tell you they expected this, is lying to you,” says one member of the Bulls’ front office.

During the offseason, to balance an offensive-minded backcourt in Zach LaVine and DeMar DeRozan, the Bulls signed guards Lonzo Ball and Alex Caruso. However, both Ball (knee) and Caruso (wrist) had been sidelined by injuries since January, until Caruso’s return last week, leaving a void in the Bulls’ defense that sent them spiraling down the standings.

Dosunmu, who averaged just 19.8 minutes through the first three months of the season, was immediately moved into the starting lineup.

In the past 25 years, only five second-round picks have averaged at least 25 minutes as a rookie for a team that made the postseason, according to ESPN Stats & Information research.

Dosunmu will make it six.

“It’s been huge,” Caruso says. “You lose Zo, you lose me, two guys that you think are going to be the main point guards, ball handlers on the team. And you throw him in, playing that position is probably the hardest position in the league to play. It’s just really impressive.”

Eight months ago, the Bulls used their only draft pick, No. 38 overall, on a little-known, hometown guard. It was a nice story. A silver lining in Dosunmu’s draft-night fall. But second-round picks rarely last in the NBA.

And Dosunmu has done far more than just last. The 6-foot-5 guard has become one of the team’s defensive anchors and has played a key role in supercharging Chicago’s rapid rise to the upper echelon of a stacked Eastern Conference.

Since becoming a starter on Jan. 15, Dosunmu’s minutes have nearly doubled. He’s logging 36.4 minutes per night while averaging 11.4 points on 53% shooting (38% on 3-pointers) to go along with 6.0 assists, the second most among rookies during that span, behind Oklahoma City’s Josh Giddey. Like with Garland, he is regularly tasked with the team’s toughest defensive assignment. Since he joined the starting lineup, he has defended a 2022 All-Star 613 times in the half court, per Second Spectrum, as the only player in basketball to eclipse 500 possessions.

In those matchups, Dosunmu has allowed 23.7 points per 100 possessions, seventh among the 31 players who have recorded at least 200 such plays, about the same as Phoenix Suns forward Mikal Bridges, the prototype 3-and-D player teams around the league dream about replicating.

“We’ve asked him to do a lot in the absence of [Ball and Caruso],” says Bulls coach Billy Donovan. “I don’t want to, as a coach, take it for granted. Here’s a guy that’s a second-round pick — usually it’s like is he going to be a G League guy? How’s he going to be?

WHEN DOSUNMU DECLARED for the NBA draft last April, he was the No. 22-ranked prospect in the ESPN 100. He was a lottery pick in mock drafts from ESPN’s Jonathan Givony and Mike Schmitz.

The accolades he accrued in college spoke for themselves: He was a consensus first-team All-American, a winner of the Bob Cousy Award (given to the nation’s top point guard) and led Illinois to a No. 1 seed in the NCAA tournament for the first time in 16 years.

But after an underwhelming performance in the Big Ten tournament and Illinois’ early exit in the NCAA tournament, teams began to sour on him. Then, thinking his status as a first-round pick was secure, Dosunmu sat out much of the pre-draft process, including much of the NBA combine. Other more visible prospects, such as Joshua Primo (No. 12), Quentin Grimes (No. 25) and Bones Hyland (No. 26), all of whom play the same position, rose in front of him.


Chicago had interviewed Dosunmu before the draft, extending an invitation to a local player who had grown up a fan of the team. But without a first-round pick, the team did not expect him to be available. Arturas Karnisovas, the Bulls’ vice president of basketball operations, started the interview with an admission: Dosunmu was a first-round talent, Karnisovas told him, but “we have the 38th pick.”

Still, both sides agreed to do the interview anyway, knowing draft night can always lead to surprises. The Bulls came away impressed with Dosunmu’s character, according to a second front-office source. They liked how polished he was off the court, how much pride he carried in being from Chicago, and they believed he would be able to contribute, in a pinch, as a rookie.

Not everyone felt the same way.

“As I broke down his game more, I didn’t think his shooting would translate,” says an Eastern Conference scout. “He had some good tools: length, wiry, he could really get downhill and get to the basket, especially going right, though he needed to work a lot on his left hand.”

The Bulls don’t have much draft capital going forward – trading away first-round picks in 2023 and ’25 and second-rounders in ’23, ’24 and ’25 – surrendering it to build a team on the verge of the playoffs for the first time since the 2016-17 season. That makes it critical for the Bulls to land contributing young players when they have the opportunity.

And as Dosunmu started to fall on draft night, past the end of the first round, then No. 31 … No. 32 … cautious optimism began to form in the Bulls’ draft room. There was some brief discussion, says the second team source, about younger players who, perhaps, could have higher upside down the line. But the Bulls wanted to put a team together that could win this season, and Dosunmu remained at the top of their board. “It’s huge. The treasure chest is not that full right now as far as building this team out, going forward. A second-round pick, with so much that’s gone down this season as far as injuries and COVID, to play this much and be this reliable — it’s incredible.”

Dosunmu has also answered perhaps the loudest question about his game, one that, in no small part, caused his precipitous drop back in July: his shooting.

Although he does not shoot often, he consistently hits the shots he takes. Dosunmu has made 44% of his jump shots this season, which ranks in the top 10 among players with at least 200 attempts, according to ESPN Stats & Information research. And he’s making 39% of his 3-pointers on 2.3 attempts per game.

And he has surprised with his ball distribution, too. Chicago is shooting 52.8% following a pass from Dosunmu, the fourth-highest percentage among the 98 players to record 300 assist opportunities this season.

“This guy has had to absorb a lot, and if he didn’t perform well, people would be like, ‘It’s expected, he’s a young guy and it’ll take some time,'” Donovan says. “But he’s responded to everything.”

DOSUNMU KEEPS NOTES to himself on the notes app on his phone, his messages serving as a running journal through each basketball season.

He is used to visual reminders; his family kept a whiteboard near the pantry in their family home in Chicago growing up, a place where lofty goals would be written clearly, such as: Player of the Year. National Championship.

After declaring for the draft, Dosunmu reviewed the notes from his junior year at Illinois and started a new chapter with the pre-draft process, reminding himself each day what he was working toward.

Dosunmu is the youngest of six children, and his family was decked out in black and white clothes, sitting in a VIP section of the venue, while teammates from high school, college and even Chicago rapper Chance the Rapper joined to show support. The atmosphere inside the bar grew increasingly tense as Dosunmu remained on the league’s draft board.

At one point, as the broadcast noted the best remaining players available, a baby picture of Dosunmu flashed across the screen and the place worked itself into a frenzy, before realizing the man they were cheering for had not yet been drafted.

All the while, Dosunmu sat and waited for his call. The lottery, where he was first projected — nothing. The first round — nothing, palpable tension filling the air with each pick as Dosunmu sat, his expression unchanging.

Then, roughly three hours into the night, he received a call from his agent.

Minutes later, the awkwardness in the air was replaced by jubilation as the pick was announced live. His mother, Jamarra, started crying as her son jumped in the air. “Homecoming” by Kanye West blared over the speakers, Dosunmu’s friends and family whipping out their phones to record the moment — and revel in it. At one point, the party spilled over into the streets of the open-air bar. Dosunmu went to the stage briefly to give a speech, but his voice was barely audible over the crowd’s elation.

But then, he says, he turned to his phone. His notes app.

“I wrote down how hungry I am. How this will always motivate me and how no matter how hard you work, you always can go harder.”

It has served as motivation ever since, Dosunmu says.

“There’s not 37 people better than me,” he said on draft night.

“Each and every day, it motivates me,” Dosunmu says. “Thirty-seven people drafted ahead of me. Of course. That’s motivation every day.”

Dosunmu says he plans to get a visible reminder of that motivation on his body during the offseason. It will be his first tattoo: the number 38.