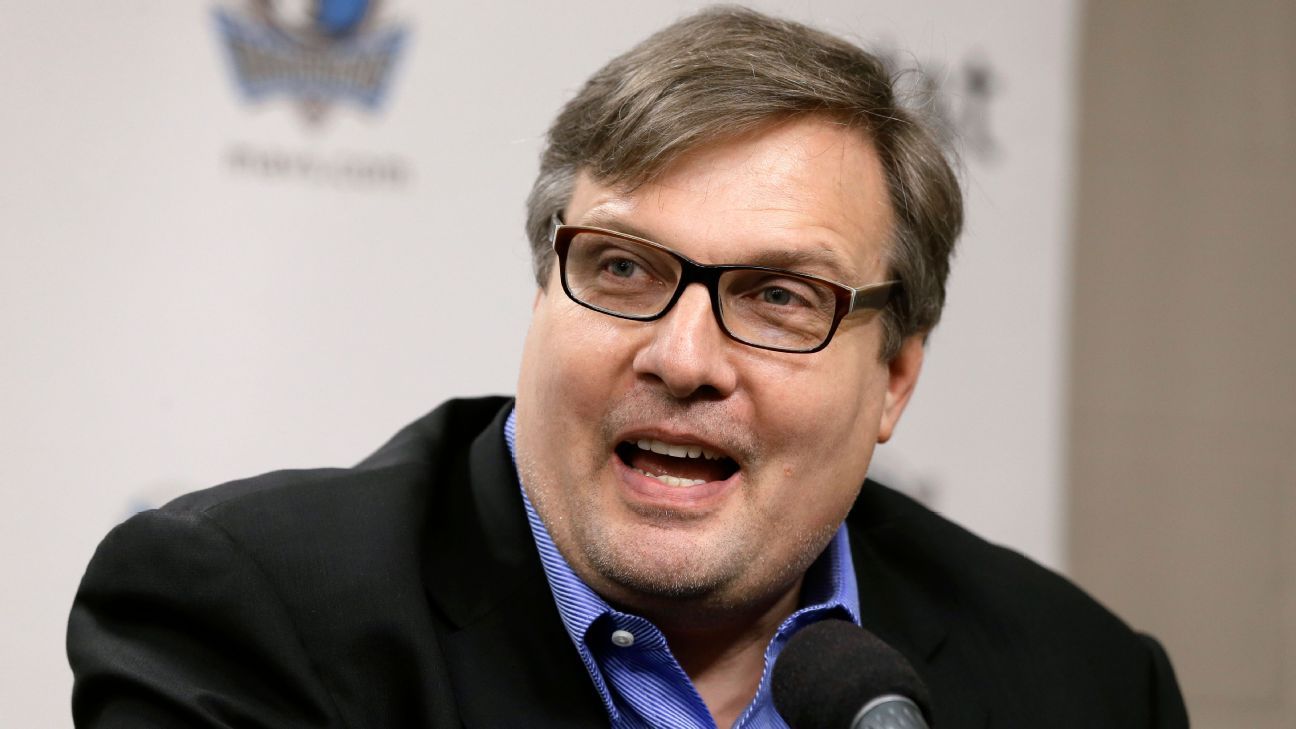 The Dallas Mavericks responded Friday to a wrongful termination suit by Donnie Nelson, accusing the former longtime general manager of a “lengthy scheme to extort as much as $100 million” and saying the lawsuit was preceded by demands that he receive “in effect, a blackmail payment” in exchange for his promise not to expose the sexual orientation of owner Mark Cuban’s chief of staff or make other claims to embarrass the team.

The official court response was to Nelson’s claim that Cuban fired him last summer as retaliation for reporting that Cuban’s “right-hand man” Jason Lutin had sexually harassed and sexually assaulted Nelson’s nephew during a 2020 job interview. Nelson’s lawsuit said his nephew, who was not identified, was invited to Lutin’s hotel room during the 2020 All-Star Weekend in Chicago and subsequently reached a settlement with the team. Nelson said he found out about the alleged incident and settlement only months later, while he was starting contract negotiations with Cuban, but that the talks stalled and eventually ended after he pressed the issue about Lutin. Cuban fired Nelson in June 2021.

Cuban on Thursday denied Nelson’s allegations, saying, “Everything in that filing is a lie.” Lutin also denied the allegations as a “complete lie.”

In Friday’s court filing, the team alleged that Nelson approached Cuban in August 2020 and said he “knew of purported scandalous allegations from a family member that he could ‘make go away’ in exchange for a long-term employment contract that he had long desired.”

“Defendants’ representatives told Nelson that if an ‘assault’ had occurred, then Nelson should immediately contact the authorities,” the response states. “Contrary to the statements in his Petition now, Nelson assured Defendants that there had not been an ‘assault’ and, to Defendants’ knowledge, neither Nelson nor anyone else ever contacted the authorities as the Defendants had suggested. However, Nelson stressed that if the allegation became public, it would cause embarrassment for a team that had just recently dealt with unrelated claims of sexual misconduct and implied it would ‘out’ the Mavericks executive’s sexual orientation.”

Nelson’s lawyer, Rogge Dunn, in an email to ESPN on Friday, said, “The Mavericks claim of extortion is totally meritless and fabricated.”

“If that allegation true, the Mavericks would not have continued to employ Nelson for another 10 months and would’ve reported his alleged extortion to police,” Dunn said. “Nelson is not the one who brought up confidentiality or his silence in the negotiations. That is something that Cuban’s lawyers demanded when they offered to settle Nelson’s retaliation claim — with the final settlement amount offered by the Mavericks being $52 million.”

The response says that when the team had learned of the nephew’s allegations, it retained an outside law firm to investigate and also informed the NBA. The Mavericks then fully cooperated with the investigation, according to the team’s response, except for Nelson, who “refused to fully cooperate, including refusing to provide his text messages to determine the extent of his involvement with his nephew’s allegations.”

“Critically, the allegations and descriptions of the incident made in Nelson’s Petition contrast sharply with the contemporaneous statements of all involved,” the response states. “Nelson’s nephew never asserted that he had been ‘assaulted.’ The actual allegations were not as sensational as the Petition claims. Indeed, the individuals involved continued to frequently talk and text for six months after their initial meeting. After the investigation concluded, the matter was closed to Nelson’s nephew’s satisfaction.”

The Mavericks, in their response, denied that any action was taken against Nelson after he raised the incident. Rather, his firing last year was largely related to his job performance, the team said. The response also says Nelson had diverted his time and attention to other outside business interests, and that he had violated team and league regulation and policies.

“In no way was the decision to terminate Nelson an act of retaliation,” the response said.

In his lawsuit, Nelson alleged that Cuban offered him $52 million to withdraw his wrongful termination claim and sign a confidentiality statement related to the alleged harassment and abuse of his nephew. A copy of a proposed settlement was attached to the lawsuit.

Nelson said he did not find out about the alleged Feb. 16, 2020, incident involving Lutin or the subsequent settlement for an undisclosed amount, until five months later. At that point, the lawsuit says, the parties were engaged in contract talks. Nelson confronted Cuban and said Lutin’s alleged activities were “putting the Mavericks’ employees, players and the entire organization at risk,” according to the lawsuit. On Sept. 18, 2020, the lawsuit claims, Cuban sent Nelson a text delaying another discussion about a contract extension, saying, “But honestly, before I can talk I have to find out more of what’s going on with the other matter. Since it’s related to some of the discussions we have had.”

Cuban’s text, the lawsuit claims, is a response to Nelson’s warning that other Mavericks employees were at risk of being sexually harassed by Lutin. The lawsuit alleges a direct link between “Nelson’s complaint and report of Lutin’s improper activities” and Cuban’s withdrawal of a 10-year, $66 million contract offer to Nelson in September 2020.

However, the Mavericks’ response says the offer was not withdrawn but instead refused by Nelson.

“While Nelson’s Petition bizarrely claims that he was retaliated against by Defendants pulling the proposed employment contract, the indisputable fact is that Nelson rejected it,” the response says.

On Nov. 16, 2021, five months after he was fired, Nelson’s attorney sent the team a letter demanding “at least $100 million, or he would make public accusations that would reveal the sexual orientation of a former Mavericks executive and also disclose other information that Nelson believed would greatly embarrass the team and numerous individuals, including Mr. Cuban,” the response says.

“Importantly, Nelson repeatedly refused to engage in any resolution that asked him to represent that he had not engaged in any criminal conduct relating to his allegations, his adult nephew’s allegations, or the other subject matters above,” the response says.

Nelson worked for the Mavericks for 24 seasons, serving as an assistant general manager and assistant coach before being promoted to president of basketball operations. He remained Cuban’s top basketball executive for years after the bitter departure of his father, Don, who served as Mavericks coach and general manager from 1997 to 2005.