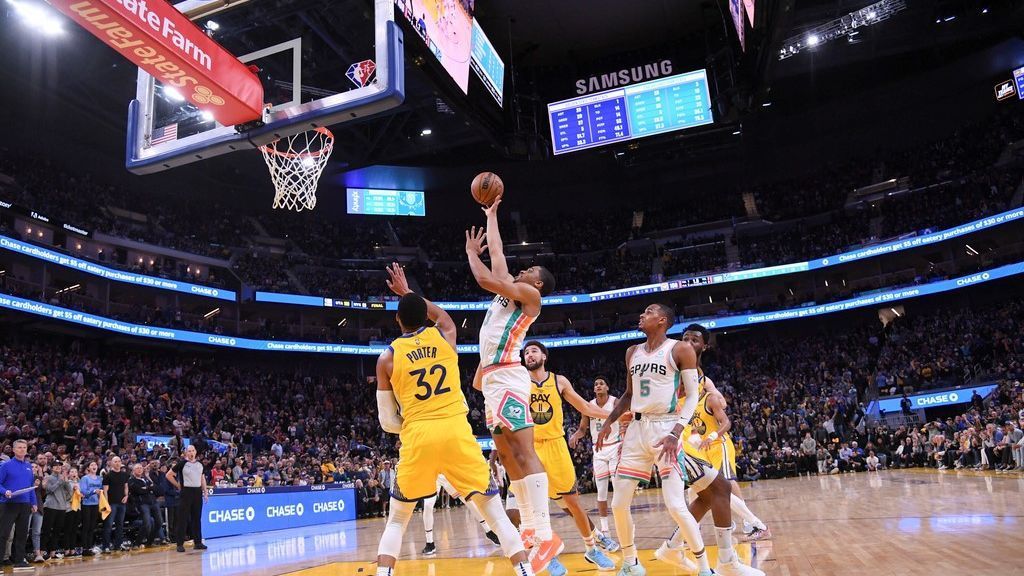 SAN FRANCISCO — The Golden State Warriors had a chance to start their two weeks (at least) without Stephen Curry on a good note.

Led by Klay Thompson and Jordan Poole, they fought back from trailing the San Antonio Spurs by 10 in the third quarter. Momentum was on the Warriors’ side as they entered the final stretch and had two second-chance opportunities to take the lead as the game entered its final minute.

But, two fouls — one for the Warriors and one against them — changed the tune and delivered them a 110-108 defeat instead.

“The fouls at the end were bizarre … I’m shocked,” Warriors coach Steve Kerr said. “I don’t know how those calls can be made. To call fouls in that situation, both of them, one that went for us and one that went against us, I don’t understand. I don’t understand how we can decide the game based on plays that have nothing to do with the game. Players are supposed to decide the game.”

Thompson missed a 22-foot jump shot. Poole missed a 29-foot step-back jumper. Andrew Wiggins grabbed the offensive board, but Devin Vassell was called for the foul, sending Wiggins to the line.

Wiggins split the free throws, giving the Warriors a one-point lead, and that might have been OK if it wasn’t for the ensuing play. After the Spurs rebounded the ball, Kevon Looney was called for the foul on Jakob Poeltl. Poeltl also split his shots — tying the game at 108 — but Keldon Johnson grabbed the board and got the shot at the buzzer.

“Wiggs had the ball, and it’s up to him to create a little space and get it out of traffic and get someone a game-winning look,” Kerr said. “And then, on the other end, I got everybody in the locker room after the game telling me they have no idea why Looney got called for the foul. He got tangled up. This is how every play goes.”

Up until that point, Kerr was pleased with how his team played. In addition to not having Curry due to a sprained left foot, the Warriors lost Draymond Green in the third quarter after he picked up two quick technical fouls.

Kerr said he was surprised at Green for picking up his second technical foul, which he got slapped with under a minute after picking up his first. While Kerr said Green never cursed at the referees or “made it personal,” he never stopped barking.

“Once he gets the first one, he understands what it takes to get the second one. And he didn’t think he deserved it,” Kerr said. “But he cannot get kicked out of the game. He knows we’re short-handed already.”

The Warriors’ loss to the Spurs kicks off a difficult final stretch of the schedule that will have direct playoff implications. Golden State’s upcoming five-game road trip features two back-to-back series, one which ends at the Memphis Grizzlies, who are a game and a half ahead of the Warriors in the standings.

Once they’re home, the Warriors will host the Phoenix Suns, Los Angeles Lakers and Utah Jazz.

The Spurs game wasn’t one that had a huge impact on the Warriors’ playoff picture, but as they play more games that do, they understand the one that got away to San Antonio could haunt them.