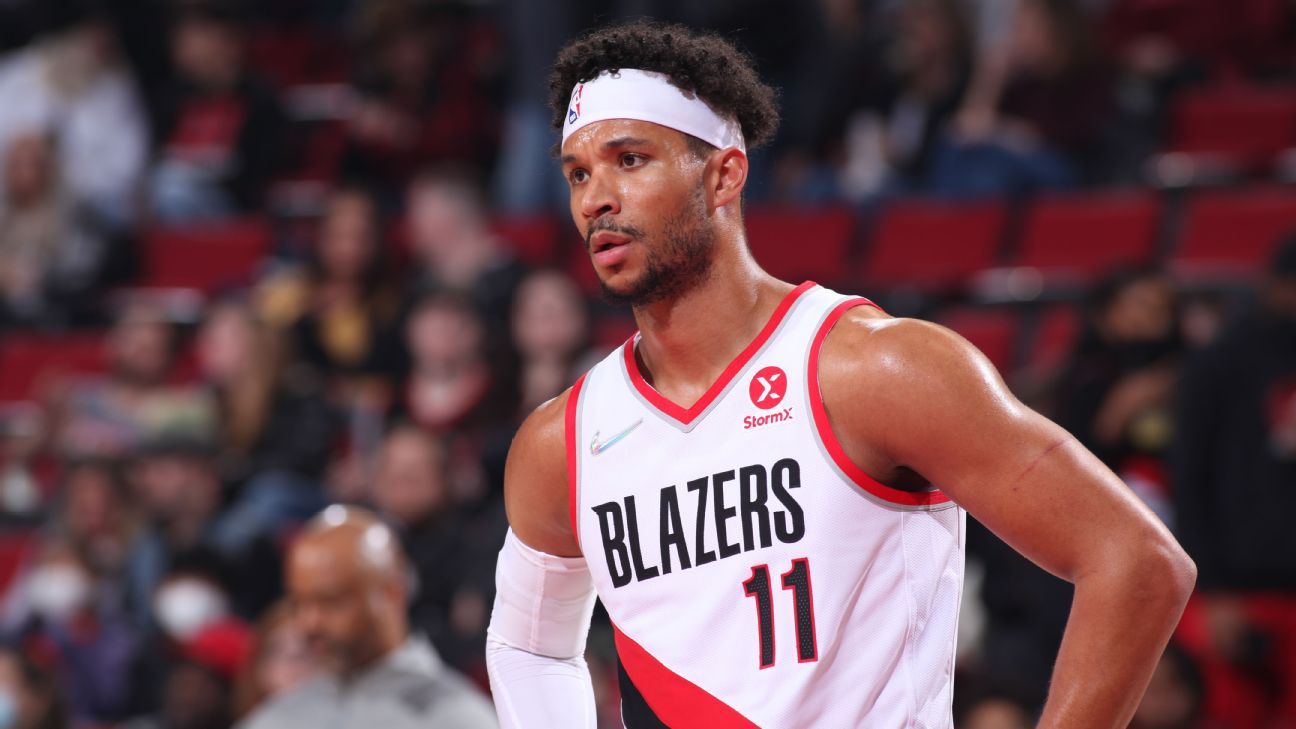 WHEN HE WAKES up in the morning, Josh Hart is greeted by a smiling family. Every morning he opens his eyes and looks at the wall in his bedroom, where he sees a wedding photo and a picture of a newborn baby.

Except it isn’t from his wedding.

The pictures hanging on the wall of the Portland home are of Larry Nance Jr., his wife Hailey and their daughter. And that’s just the way Nance wants it.

“Oh I told them he can’t take that off,” Nance told ESPN. “Every morning he’s gotta tell me good morning.”

What I woke up to the last two mornings…definitely going to take these down bro 😂 @Larrydn22 pic.twitter.com/Wg1DKUtbao

Nance and Hart — once teammates with the Los Angeles Lakers — were on opposite ends of the Feb. 8 deal that sent CJ McCollum to the New Orleans Pelicans, with Nance and Tony Snell also going to New Orleans, while Hart, Didi Louzada, Nickeil Alexander-Walker and Tomas Satoransky became Portland Trail Blazers.

Instead of being reunited, as they’d hoped, the two were passing each other in the air. And while they couldn’t help each other on the court, there was one thing they could do to make the transition easier: swap houses.

HART AND NANCE became close friends when the two played for the Lakers. Nance had been there for two seasons when Hart was drafted in 2017. The two quickly bonded during their short time together. Both had been four-year college players who enjoyed the same things: video games, family, dogs and Chelsea soccer.

“It kind of started with playing, at that point it was Fortnite together,” Hart said. “Video games was an avenue. When you’re playing video games with your friends or teammates, you’re playing for hours. You start having a deeper friendship.”

Midway through Hart’s rookie year, Nance was traded to the Cleveland Cavaliers, who sent him to Portland this past summer. The Lakers sent Hart to New Orleans as part of the Anthony Davis trade in 2019.

For a brief moment leading into this year’s trade deadline, the two thought they might end up as teammates again. The Pelicans were set to deal for McCollum. At a minimum, Hart had to be in the deal just to make the money work. That got Nance excited.

“I was hyped because like ‘Oh man, I might get to play with Josh again’ like that’s dope,” Nance said. “Then one of our mutual friends was like ‘What if you’re in the deal to New Orleans, Larry?’ and I’m like, that ain’t happening.”

But that is exactly what happened.

The two friends FaceTimed with each other the Monday night before the trade. Hart let Nance know because of the matching salaries, they may not be sharing a locker room.

“It’s a bummer,” Hart said about swapping teams with someone you’re close to. “When you’re traded midseason, it’s a lot. Everything is just going at a fast pace. … Obviously, [Satoransky] was in a different trade, [Alexander-Walker] is in a different trade and [Louzada] is dealing with his injury. So in a sense, I’m getting here by myself. It’s definitely different.”

Nance had purchased a house in the Portland area upon being dealt there last summer, while Hart owned a home in the New Orleans area, having played there for the past three seasons. Nance, who has a year left on his contract, wasn’t planning on buying a home in New Orleans when he could be on the move again next summer (or even sooner if another trade materializes). Hart, who has two non-guaranteed years left on his contract, was in a similar situation in Portland.

That’s when the idea to swap homes — at least temporarily — materialized. When Hart made it to Portland, he checked out Nance’s digs and reported back that he liked what he saw.

Nance sent movers to pack up some of the essential items in the house — he left the couches and TVs — so Hart could make room for some of his belongings.

“I’m gonna be honest with you, I have no idea what they took out of the house [in New Orleans],” Nance said. “I guess just the immediate essentials. There’s a lot of their stuff still in there. We tried to be a little more courteous and take most of our stuff outta there.”

The living adjustment has been easier than the basketball adjustment, at least for Nance, who has yet to play for New Orleans after having arthroscopic surgery on his right knee shortly after the trade. He has started shooting and running, and could make his debut during this week’s homestand.

Hart, who was already having a career year for New Orleans, hit the ground running for Portland. He’s averaging 19.9 points through his first 13 games with the Blazers, including a career-high 44 points on March 12. But he finds himself looking up in the play-in tournament standings at his old teammates, with whom he is still close.

On the night he was traded, Hart and Alexander-Walker sat courtside and bid farewell to their New Orleans teammates, a sign of the closeness of the locker room. It’s something Hart told Nance to embrace.

“I told him he would love the guys and that it’s a bunch of great guys who are tight-knit,” Hart said. “Told him that was something he’d really like. Told him he’d really love playing for [Pelicans coach] Willie [Green]. He’s one of the more genuinely good people on and off the court that’s in the league.”

Even as his injury has sidelined him, Nance has taken that advice to heart, pointing and cheering on the sidelines during big plays and even going as far as posting memes about Pelicans rookie Herbert Jones after wins.

Nance, who got married with only immediate family present in 2018, said if he’d had groomsmen, Hart would have been one of them. The day Nance was traded to Portland seven months ago, he was headed to stand in Hart’s wedding.

And while the next trade didn’t make them teammates again, they’ll still enjoy their friendship — and their houses.

“That’s a relationship I’ll have way beyond basketball,” Nance said.