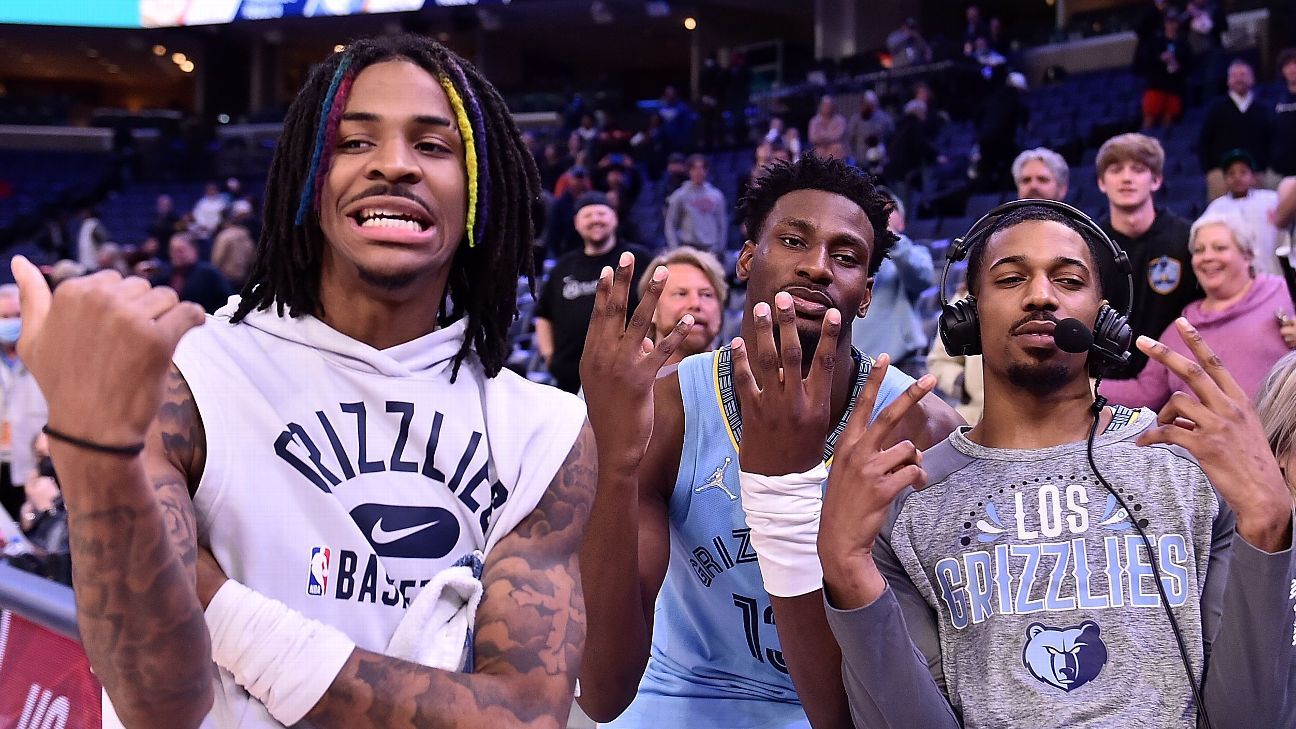 For a guy from a small town in South Carolina, Ja Morant sure feels comfortable in the spotlight. He was in his element entertaining the New York media horde following the Memphis Grizzlies‘ Feb. 2 win inside Madison Square Garden.

“Mic check, mic check — yo, yo, yo,” Morant said, playfully cupping the microphone, as he settled into his seat next to fellow 22-year-old franchise cornerstone Jaren Jackson Jr. “It’s the Unicorn, man, and the Ninja in here checking in.

Ready or not, the Grizzlies are here, having pushed their way into the contender conversation at least a couple of years earlier than many anticipated when Memphis’ “Grit ‘n Grind” chapter closed in 2019 and a rebuilding project began.

Things often happen fast with Morant and the Grizzlies.

That’s the case when Morant zooms coast-to-coast and finishes, covering the length of the court in less than four seconds — as he did after grabbing the rebound off a shot Jackson rejected, flying up the floor for a clutch transition layup in the Grizzlies’ recent home win over those New York Knicks.

It’s also true in the bigger picture, as Memphis morphed from moribund to a play-in team with massive long-term upside during Morant’s rookie year, took a significant step by making the playoffs during his sophomore campaign and made a major leap this season, when only the reigning Western Conference champion Phoenix Suns have a better record.

Live from Memphis, wall-to-wall, in-depth coverage begins with the 7 a.m. ET edition of SportsCenter and runs through the late-night edition of SportsCenter, including special editions of NBA Today and NBA Countdown, leading into the Grizzlies’ game against the Brooklyn Nets (7:30 p.m. ET on ESPN and the ESPN app).

The Grizzlies, a team built by 34-year-old vice president of basketball operations Zach Kleiman and coached by 37-year-old Taylor Jenkins, seem to be cranking open an extended window to contend. Memphis’ roster doesn’t have a player older than 28, and the Grizzlies’ stars are barely old enough to buy a bottle of Casamigos, the tequila Morant gleefully swigged during his Instagram Live session filmed on a private jet en route to the first of what will likely be many All-Star appearances.

With Morant in constant attack mode, the Grizzlies are a wildly entertaining team that often overwhelms opponents with athleticism, leading the league in points in the paint, rebounding and blocked shots. The young Grizzlies, who host the Brooklyn Nets Wednesday at 7:30 p.m. ET (ESPN and ESPN the App), also unofficially lead the league in brashness.

“We gonna let everybody know we here,” Morant said.

The Grizzlies have gone from being perceived as a fun, young team on the rise to one with a target on it. Some critics, including veterans around the league, feel that the confidence bordering on arrogance is premature for a group that has yet to win a playoff series. But the Grizzlies, as Morant so colorfully put it that night at Madison Square Garden, “ain’t duckin’ no smoke.”

“Y’all watch and see, man,” Jackson said. “You could compare it to whatever you want to compare it to back in the day with young teams coming together that had a lot of talent and ended up being really good.

From Grit ‘n Grind to the greatest show in the league

The Memphis basketball renaissance has its roots in the end of the Grit ‘n Grind era. Despite the departures of Tony Allen and Zach Randolph, the Grizzlies still had cornerstones Mike Conley and Marc Gasol in place in 2017-18. But Conley was limited to 12 games by an Achilles injury that season, and without Conley, Memphis bottomed out at 22-60, yielding the No. 4 overall pick used to take Jackson.

The Grizzlies truly began looking to the future at the 2019 trade deadline, when they sent Gasol to the Toronto Raptors. Although Conley finished out a 33-49 season, he went to the Utah Jazz in a deal struck just before the 2019 draft, returning multiple first-round picks.

By that point, Memphis had already gotten the kind of lucky break any rebuilding team needs. Because the Grizzlies owed a first-round pick to the Boston Celtics from the Jeff Green trade, they didn’t tank down the stretch in 2018-19, hoping to get their pick obligation out of the way. Instead, Memphis jumped up from the eighth spot entering the lottery to the No. 2 pick, landing Morant.

Even with Morant and Jackson as promising young stars, the Grizzlies seemed headed toward a multiyear rebuild. They operated that way too, wisely using their cap space to take on contracts from other teams (Andre Iguodala and Josh Jackson) in exchange for future picks and then-second-year guard De’Anthony Melton, a favorite of statistical projections who has blossomed into a key reserve in Memphis.

In addition to their own picks in the lottery, the Grizzlies used extra picks to add undervalued prospects later in the draft. The Conley trade yielded a 2019 first-round pick Memphis parlayed into Gonzaga big man Brandon Clarke. A year later, the Grizzlies were busy on draft night, acquiring the 30th pick to select TCU wing Desmond Bane and taking Jackson’s former Michigan State teammate Xavier Tillman in the second round — both in exchange for second-round picks.

Despite the trades, Memphis still has extra picks incoming. The Grizzlies could have as many as three first-rounders this season if the Los Angeles Lakers‘ pick (currently No. 12 overall) falls outside the top 10 and get Golden State’s first-rounder next season from the Iguodala deal.

The choice of Jenkins, a first-time head coach who was plucked out of relative obscurity on the Milwaukee Bucks‘ coaching staff, seemed like another indication the Grizzlies were thinking more about development than immediate success. Yet with Morant producing ahead of schedule and a deep bench led by Melton, Tyus Jones and rookie Brandon Clarke (added via the Conley trade), Memphis held the No. 8 seed heading into the bubble restart of the 2019-20 season.

Losing the play-in game hardly dampened the Grizzlies’ hopes. A year later, despite fears of regression, Memphis was right back in the play-in tournament with young talent in key roles. Bane and Tillman both played more than 1,000 minutes as rookies, as did second-year players Morant and Clarke.

This time around, Memphis beat the Golden State Warriors in the Bay to return to the playoffs for the first time since 2018. And while the Grizzlies lost in five games to the Jazz, their young core getting a taste of the playoffs set the stage.

The Brooks blunder, and the evolution of a defensive stopper

Dillon Brooks was minding his business on the Grizzlies’ bench on Dec. 14, 2018, watching his team play the Miami Heat while he was sidelined by a knee injury, when fans at FedExForum informed him of the news that they had seen while scrolling their Twitter feeds. Brooks had been traded.

That’s what ESPN’s Adrian Wojnarowski had reported. The Suns thought he was headed to Phoenix in a three-team deal. So did the Washington Wizards, who had agreed to send Kelly Oubre Jr. to Memphis and Austin Rivers to Phoenix to acquire Trevor Ariza.

One pretty major problem: The Grizzlies didn’t agree to trade that Brooks.

The Grizzlies thought they were moving MarShon Brooks, a journeyman guard who has played in China since that season. Dillon Brooks, then a promising second-round pick in his second season, figured prominently in the franchise’s long-term plans. The miscommunication occurred because then-Grizzlies GM Chris Wallace communicated with the Wizards’ front office, not directly with the Suns.

The deal was off — an awkward, comedic footnote in the Memphis rebuild.


As the Grizzlies hoped, Brooks has become an important part of their core. He has averaged 16.8 points per game over the last three seasons and emerged as one of the league’s most tenacious on-ball defenders. Brooks’ snarling swagger has prompted teammates to nickname him The Villain. Brooks, who signed a three-year, $35 million extension in 2020, has missed much of this season because of wrist and knee injuries, recently returning after an 11-week absence. He was reinserted into the starting lineup and figures to play a key role in a playoff run, particularly as the pest who harasses the opponent’s leading scorer.

“We know how important he is to us,” Jenkins said.

The Grizzlies knew all along, no matter what their trade partners believed.

Will youth be served? Why Memphis is battling history

Despite the team’s 2021 playoff run, expectations for Memphis were modest entering this season. After all, Memphis’ big move last summer was yet another forward-looking trade: sending starting center Jonas Valanciunas to the New Orleans Pelicans for center Steven Adams and additional salary. The Grizzlies moved up from the 17th pick to 10th, taking Stanford forward Ziaire Williams, and added a protected 2021 first-round pick from the Los Angeles Lakers.

Memphis had an over-under line of 41.5 wins at Caesars Sportsbook, putting them eighth in the West. The Grizzlies were on that .500 pace, with a record of 9-10, when Morant went down with a knee sprain, a blow after his strong start to the season.

Improbably, Memphis rode strong defense, depth and some good fortune with opponent shooting to a 10-2 record without Morant — only to promptly lose in his return.

It didn’t take long for Morant to remind everyone just how good the Grizzlies could be with him. Just before New Year’s Day, Memphis ripped off a pair of statement victories, going on the road to beat the Suns 114-113 and the Lakers 104-99, kickstarting an 11-game winning streak that also featured a home win over the Warriors.

Around that point, the Grizzlies transformed from good story to West elite.

It’s certainly unusual for a team as youthful as Memphis — the league’s fourth-youngest team when weighted by minutes played this season — to make a deep playoff run. Of the 59 teams in NBA history that have had an average weighted age of less than 25 at season’s end, just six have advanced to the playoffs (a group that already includes last season’s Memphis team).

This season, there are five teams that young including the Grizzlies and Minnesota Timberwolves, both of whom are on track to make the playoffs. The other three — Detroit, Orlando and Houston — have the worst records in the league.

Of that group of playoff team, only the 2011 Oklahoma City Thunder — who outlasted Memphis in a seven-game matchup in the second round — won a series. There’s certainly reason to believe the Grizzlies can do better. Only one of the first-round losers (the 2009 Portland Trail Blazers) had home-court advantage in that series, as Memphis surely will.

Although inexperience increases the chances of a first-round upset, performance matters more. And the Grizzlies have played every bit like a contender.