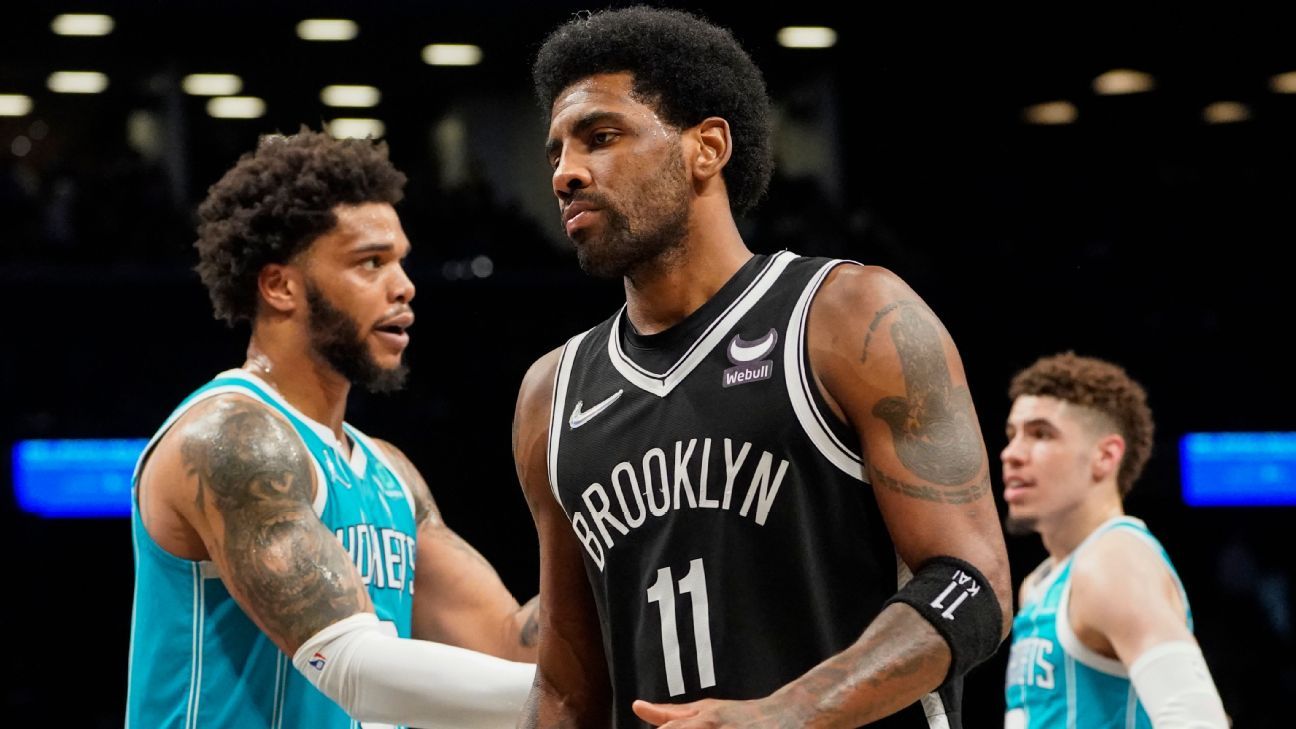 NEW YORK — Brooklyn Nets guard Kyrie Irving made his home debut Sunday night during a 119-110 loss to the Charlotte Hornets — making it clear that he believes his presence on the floor represents something much larger than a basketball player.

“I was just trying to ground myself as much as possible today,” Irving said. “And just prepare for the warm reception from a lot of supporters of the organization, of me, just the journey thus far. So I don’t take it for granted what happened tonight; it was historic. I’m grateful I got a chance to be out there with my brothers and just leave it all out there.”

Irving, who is not vaccinated against COVID-19, had not been able to play at home all season because of New York City’s private employer mandate. New York City Mayor Eric Adams rolled back that mandate last week for athletes and performers, allowing Irving to make his home debut on Sunday.

The 30-year-old former All-Star got a big ovation from the sold-out crowd, the largest in Barclays Center history at 18,166, after being introduced in the starting lineup. Just before tipoff, he walked to center court and pointed around the arena to acknowledge the reception he got from the Brooklyn fans.

“Tonight my presence out there was just bigger than the basketball game,” Irving said. “I was just representing a lot of individuals that are out there in a similar situation as me. And now that I can play, I think we should be opened up for everybody.”

Irving struggled to find a rhythm all night, finishing just 6-for-22 from the field in almost 41 minutes on the second night of a back-to-back. He had 16 points and 11 assists but was just 1-for-9 from beyond the arc.

“It was great to see him out there,” Nets star Kevin Durant said. “Good to see the fans excited for him. Unfortunately, we took the L, though, but we move forward knowing that we have him here. Build on what we have and try to get a win next game.”

After being asked how he wanted his stance against taking the vaccine to be remembered, Irving spoke passionately for over two minutes about how he felt he was standing up for more people than just himself.

“I made it very clear it was never just about me,” Irving said. “I think for my own legacy, that’s to be written by all those that I impact and all those that impact me and it’s far bigger than just a basketball game, but when I’m in this locker room I get a chance to perform with a bunch of guys that are selfless and are sacrificing just as much as I am. It makes it worthwhile. …

“The point of this season for me was never to just take a stand. It was really to make sure that I’m standing on what I believe in, in freedom. Freedom. I don’t think that’s a word that gets defined enough in our society. About the freedom to make choices with your life without someone telling you what the f— to do.”

The Nets originally decided before the season that they did not want Irving as a part-time player but they reversed course in December after a COVID-19 outbreak ravaged the team. Irving made his season debut on Jan. 5 in a win over the Indiana Pacers. Sunday marked his first game inside Barclays Center since Game 2 of the Eastern Conference semifinals against the Milwaukee Bucks on June 7, 2021.

“I’m standing for freedom,” Irving said. “So that’s in all facets of my life. There’s nobody that’s enslaving me, there’s nobody that’s telling me what I’m going to do with my life, and that’s just the way I am. If I get tarnished in terms of my image, and people try to slander my name continuously, those aren’t things that I forget. I haven’t forgotten anything that anybody said. I don’t read everything, but I definitely read some things that put my family’s name in a certain position that I believe are unfair.

“I’ve been discriminated against. People have said things that have been biased. They’ve gone against their own morals. And where we’re living today, I have such a strong moral code, of just being honest, being truthful, following God’s guidance, and just living with the results. But in terms of that, I’m a servant. I’m comfortable being in that position.”

The loss to the Hornets dropped the Nets, now 39-36, into ninth place in the Eastern Conference. They don’t have the tiebreaker against Charlotte but do have a favorable schedule in the final two weeks of the season with five of their last seven games against teams at or below the .500 mark.

Despite the loss, Irving found comfort in the fact that he was back on the floor in a place he hadn’t played in almost a year.

“Not the result we wanted,” Irving said. “I didn’t shoot as well as I wanted. Basically none of the things I had hoped for going well tonight, it just didn’t happen. And that’s just the flow of basketball. Mentally, physically, emotionally, spiritually, it felt OK, but just the jump shot wasn’t falling tonight. We weren’t hitting shots. So not the result we wanted, but definitely grateful that we were part of history tonight and I got to do it here.”