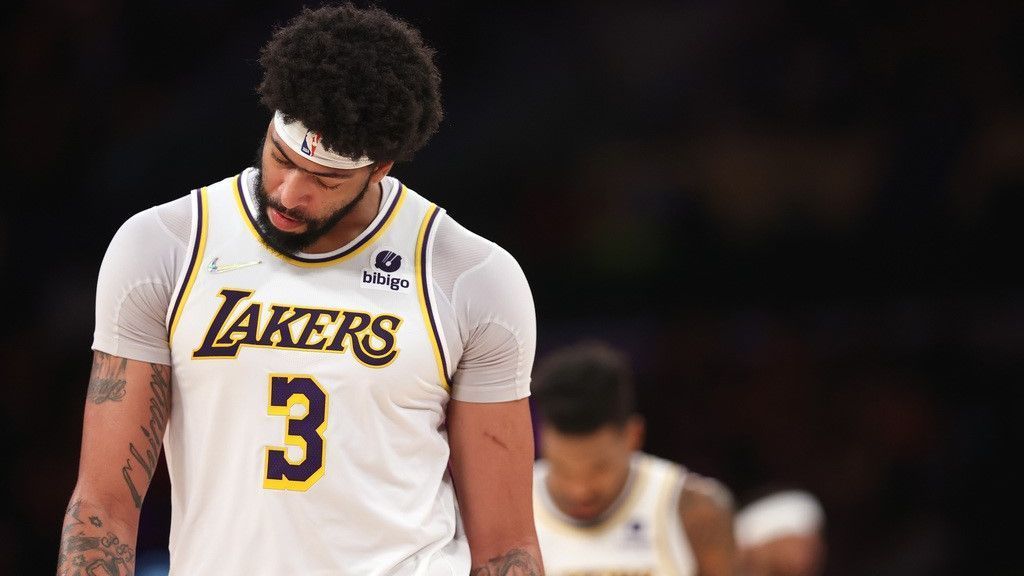 LOS ANGELES — After the Lakers continued their free fall from play-in tournament contention with a sixth straight loss on Sunday, Anthony Davis looked back at a season gone awry and reflected on what “could have been.”

“I think the biggest thing that I think about personally is what we could have been, had we stayed healthy all year,” said Davis, who has missed 39 of L.A.’s 78 games because of various injuries. “What could we have been. … Guys feel like, ‘OK, what could we have been if I was healthy all year, [LeBron James] was healthy, [Kendrick] Nunn was healthy.’ You think about those things. We put this team together and it looked good on paper, but we haven’t had a chance to reach that potential with guys in and out of the lineup.

“So the most frustrating part of this season is not being sure of what we could have been.”

L.A.’s 129-118 loss to the Denver Nuggets on Sunday, coupled with the San Antonio Spurs‘ win over the Portland Trail Blazers, increased the Spurs’ lead for the No. 10 seed and final play-in spot in the Western Conference to two games with four games remaining. But since the Spurs own the tiebreaker by winning their season series against the Lakers, L.A. would actually have to gain three games on the Spurs by season’s end to catch San Antonio.

The Denver game was just Davis’ second game since mid-February due to a right midfoot sprain and the injury continued to flare up, causing him to sub out in the first quarter and receive treatment on the sidelines. As remote as the chance of the Lakers catching the Spurs might seem, Davis vowed to play through pain as the regular season comes to a close with road games in Phoenix on Tuesday, Golden State on Thursday, back home Friday against Oklahoma City and a road finale in Denver on Sunday.

“They said I can’t get any worse,” Davis said of the Lakers’ medical staff. “Once I hear that, if I can’t make it any worse, then it’s just going out and making sure the foot is comfortable enough to go out there and play.”

James sat out Sunday with soreness in his left ankle. A source familiar with James’ status told ESPN it is “unlikely” James’ ankle will improve enough for him to play against the Suns, but cautioned that things could unexpectedly improve in the next 48 hours and allow him to give it a go.

Without James, L.A. made a game of it against the Nuggets until the fourth quarter, when reigning MVP Nikola Jokic scored 10 of his 38 points and the Lakers were outscored 34-24.

“It sucks,” said Lakers coach Frank Vogel. “Sucks telling these guys after every game, ‘I’m proud of you. Good effort. We lost.’ So, it’s not fun, but it could be worse. It’s easy to unravel. Our group has stayed together. They’re putting up the good fight. Their attitude has been wonderful, in terms of just working together to get this thing right. And it’s just disappointing to come in to keep saying we fell short.”

Russell Westbrook had an efficient game with 27 points on 11-for-15 shooting, 10 rebounds, 7 assists and 2 steals in the loss. It was his 77th appearance out of 78 games, giving one constant to a team that trotted out its 39th different starting lineup of the season on Sunday.

The Spurs have road games in Denver on Tuesday and Minnesota on Thursday, followed by a home-road back-to-back hosting Golden State and going to Dallas on Saturday and Sunday.

“There’s no moral victories in this league. Especially with us,” Davis said. “The whole world wants to see us lose, to be honest. But my job is to be on the floor and help these guys win and I think our spirit is very high in the locker room and we’re going to continue to fight.”