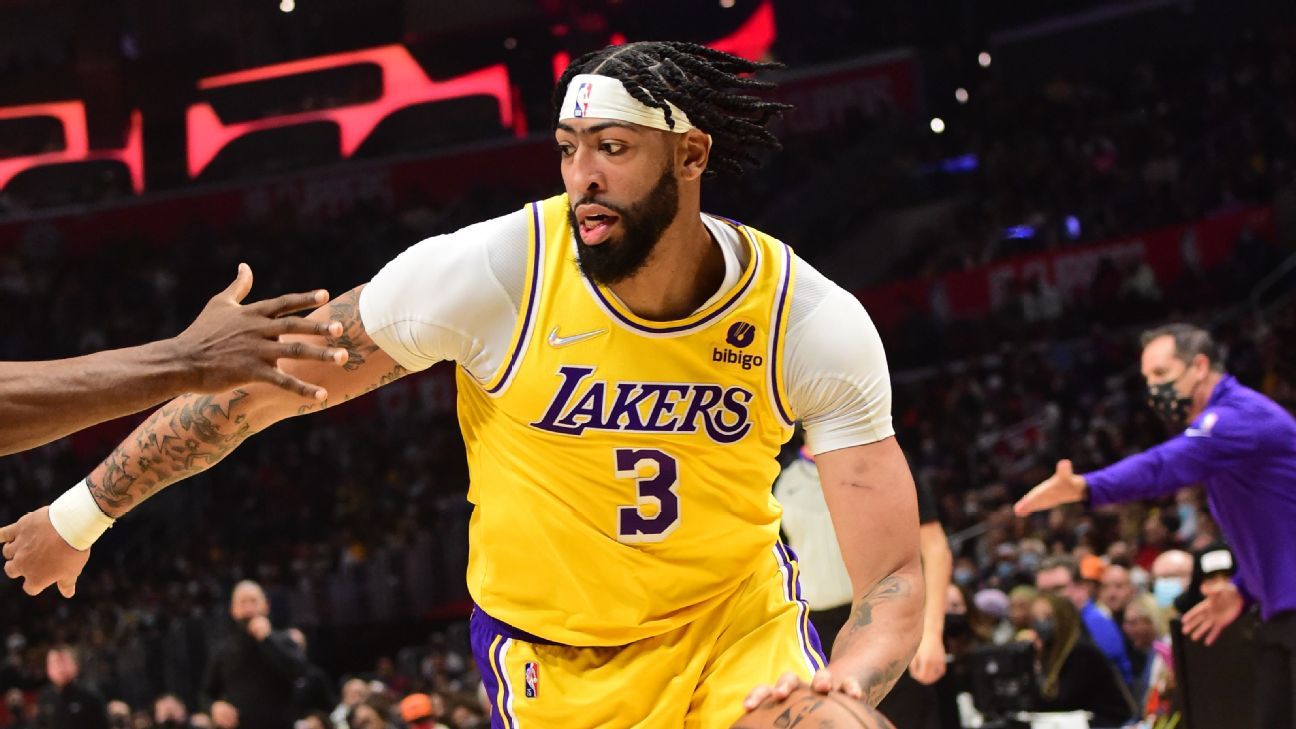 As the Los Angeles Lakers wind down one of the most disappointing seasons in franchise history and brace for a consequential summer that could include major changes to try to return to a championship trajectory, Anthony Davis says he doesn’t concern himself with hypothetical trade scenarios that involve him.

“I can’t control those things,” Davis told ESPN after the Lakers’ loss to the Phoenix Suns on Tuesday, which eliminated L.A. from play-in tournament contention. “That’s an upstairs thing. A Klutch, Rich Paul thing. My agency.

“I mean, my job is to go out and play basketball. Obviously I love it in L.A. If that’s something that they’re considering, then we’ll have a conversation about it. I don’t know what they’re talking about, what’s the plan.”

To be clear, Davis has no indication that the Lakers will trade him, but as a 10-year NBA veteran, he is aware of how the league works. “I mean, I don’t think they’re planning on doing anything [with me],” he said. “I don’t know, man. F—, I don’t know.”

Davis made an immediate impact in his first year with L.A., playing 62 of 71 regular-season games in the hiatus-shortened season and helping the Lakers to the championship while finishing second in Defensive Player of the Year voting. Following that title, the Lakers rewarded Davis with a five-year, $190-million contract extension.

He has missed exactly half of L.A.’s regular-season games since then because of various injuries. The Thursday game against the Golden State Warriors, for which Davis will be sidelined because of a right mid-foot sprain and plantar fascia, marks Game No. 76 out of 152 he’ll have sat out since the start of the 2020-21 season.

Davis, an eight-time All-Star and four-time All-NBA selection, is aware that his injury history is the only major wart on an otherwise sterling professional resume.

“My job is to be on the basketball floor and play games,” Davis said. “When I’m healthy, I’m a motherf—er. But I got to stay healthy. Unfortunately it was two injuries I couldn’t control this year but I’ll be back at it next year and see what happens.”

Davis missed 17 straight games from late December until late January after suffering an MCL sprain in his left knee. Then in mid-February, he had the foot injury, causing him to miss 18 straight games.

But those injuries, Davis said, do not make him injury prone. Both stemmed from unfortunate circumstances that would have hurt any player.

“I had no injuries this year where it was, ‘Damn, that’s AD’s fault,'” Davis said. “Someone falls into my leg, sprains my MCL. The same exact thing [Kevin Durant] had.”

Indeed, Durant missed 21 straight games after his Brooklyn Nets teammate Bruce Brown fell backward into his left leg while getting back in transition defense against the New Orleans Pelicans and absorbing contact from Herb Jones that sent him sprawling.

It was reminiscent of the instance this season when LeBron James attempted a give-and-go with Davis and caused the Timberwolves’ Jaden McDaniels to fall to the floor and crash into Davis’ knee — James used a swim move to get by McDaniels and the Wolves wing lost his balance.

A couple of months later, Davis’ second significant injury of the season came when he leaped into the air to catch an off-target lob pass from teammate Malik Monk and landed on a size-20 sneaker of Utah Jazz center Rudy Gobert as he came back down to the floor. “And then I fall on someone’s foot and twist my ankle really bad — well, my foot, really badly,” Davis said. “I can’t control that.”

When asked if the extended offseason will allow Davis, 29, to re-evaluate his training methods in hopes of staying healthy in the future, the big man pushed back.

“No,” Davis said. “To be honest, my training methods were top tier. I can’t control stepping on someone’s foot and I can’t control someone falling into my leg. It’s not like I’m out of shape and I f—ing did some crazy s— or it was anything I could control.”

Davis believes his approach to training has only helped him, not hurt him.

“The good thing is, what people don’t know, is that the doctors actually told me that you’re lucky. Our team doctor said if you weren’t doing the work that you were supposed to be doing this summer, both could have been worse,” Davis said.

“I could have one, f—ed up my foot way more. Or I could have torn some s— in my knee. So it’s a positive for me, knowing that I put in a lot of work this summer and I prevented catastrophic injuries from happening to my body.

“So, people can say what they want to say, but I know what I do every summer to get ready for an 82-game season.”

The Lakers announced Thursday that forward Trevor Ariza was being placed on waivers.

Raptors vs. Trail Blazers prediction and odds for Saturday, January 28 (Defense is optional)
Did Joel Embiid embarrass the Jazz? | First Take
Best NBA prop bets today for Pelicans vs. Bucks (Giannis Antetokounmpo prop to bet)
NBA Standings: Can anyone in the East catch the Boston Celtics?
Everything LeBron James and Lakers said about controversial loss in Boston